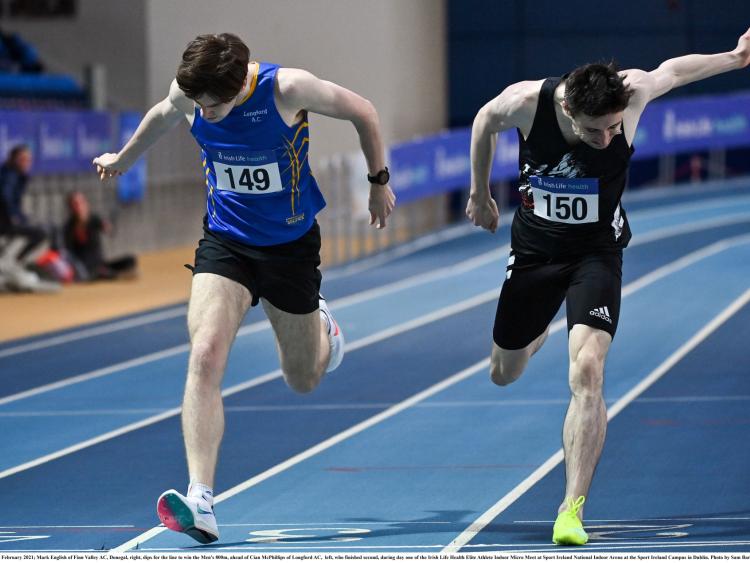 Mark English of Finn Valley AC, Donegal, right, dips for the line to win the Men's 800m, ahead of Cian McPhillips of Longford AC

After his heroics on Saturday, Longford's Cian McPhillips has been included in a bumper Irish team of 24 athletes  for the European Indoor Athletics Championships in Torun, Poland on March 5-7.

Several of Ireland's top performers from the 2019 edition of this championships return in 2021, including medallists Mark English and Ciara Mageean, along with semi-finalist Phil Healy, while there are several performers who can additionally target a final or better, most notably 800m record breakers Siofra Cleirigh Buttner and Nadia Power, along with Andrew Coscoran, Sean Tobin and John Travers.

“It has been a remarkable indoor season so far in 2021, for many reasons, and this is reflected in both the size and quality of the team travelling to Poland.  Despite higher qualification standards and fewer opportunities to compete, Irish athletes nailed their opportunity when it presented itself, most notably this past weekend at the Irish Life Health Elite Micro-Meet, and we now have an unprecedented 24 athletes who have earned selection for the 2021 European Athletics Indoor Championships, with many more who have posted qualification standards missing out due to the 3-athlete-per-event limit”.