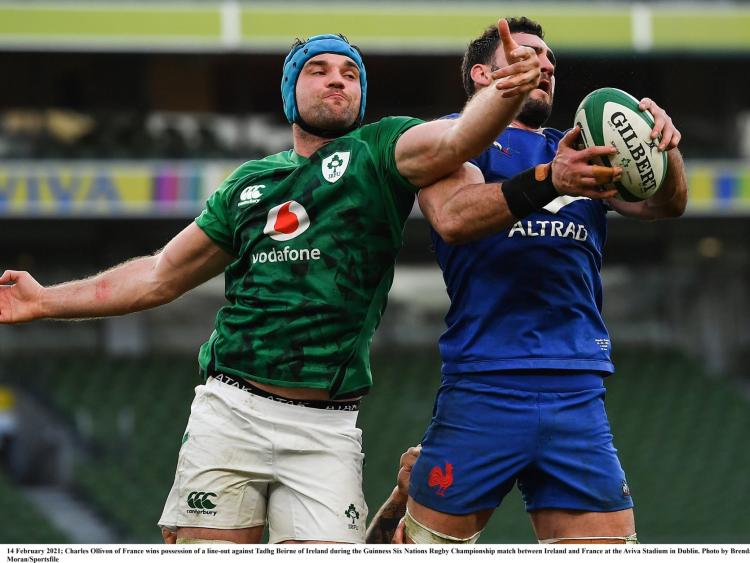 Charles Ollivon of France wins line out possession against Tadhg Beirne of Ireland during the Guinness Six Nations Rugby at the Aviva Stadium on Sunday Picture: Brendan Moran/Sportsfile

We had another great weekend of Six Nations rugby, great from a neutral perspective but not so from an Irish one.

England scored their inevitable win over an Italy side who now have lost 29 games in a row in the Six Nations.

Everyone loves the biannual trip to Rome but surely there must be a rethink as regards allowing a playoff against the best of the others, such as Georgia, for the bottom Six Nations team, with the winner taking part in the following years Six Nations Championship?

Scotland v Wales was another great game and after a terrible start the rugby gods are now benevolently looking down on Wayne Pivac’s Wales, who for the second week in a row had the benefit of playing part of the match against 14 men.

The offence committed by Xander Ferguson was very similar to the one committed by Peter O’Mahony the week before. There is a big focus on cutting down any contact with the head and although it had a very negative effect on a match hopefully will have long term benefits for player safety.

So where are Ireland now? The positives are that Ireland's defensive and attacking line outs have improved, no doubt from Paul O’Connell’s influence. The scrum is solid and defence has generally been good.

The tries that were leaked in the first two Six Nations games were largely down to individual rather than system errors. James Lowe has a lot of great attributes but sharpening his defence to an international standard is something that he needs to do immediately or his game time will be limited to an impact sub at best.

The playing pool has also expanded quite a bit since the last World Cup.

However, the elephant in the room is still at out-half. Would we have won on Sunday if we had Johnny Sexton starting. Quite possibly yes, as the gap between himself and the other pretenders, even allowing for age starting to catch up with him, is still quite pronounced. Ireland seemed to play better when Ross Byrne came on though.

The Italy match is surely an opportunity to look at another scrum half such as Craig Casey and also an out half like Harry Byrne. There is plenty of experience in the squad to guide them through against the Italians but with the pressure mounting on Andy Farrell it is unlikely that we will see a whole lot of changes.

It is actually quite a good Ireland squad and with a few more bounces of the ball going their way and with a bit of luck they would be now two wins from two. However, the lack of a discernible pattern in attack is worrying and there will have to be questions asked about what Mike Catt is trying to do? When Ireland are attacking it is collision based and predictable and lapped up by a good rush defence.

Contrast this when the French players had the ball, there was plenty of innovation and offloading, with an air of danger accompanying their every visit into the Ireland 22. Irish teams have routinely beaten French opposition in Europe this season and in the past, so they are more than capable of scoring tries but kicking the leather off the ball especially when you are losing ground in every kicking duel is not going to score tries.
A shot at the championship is lost at this stage but if Irish fans do not see some positive progress especially in terms of attack before the end of this year’s tournament then the calls for Andy Farrell’s departure can only grow.

Player Ratings
This was the first time Ireland lost their first two Six Nations games and their first loss at home since being turned over by England.

Cian Healy 6: What a legend Cian Healy is, gave his all, bloodied and bandaged. At this stage he should be rotating with a younger prop and emptying the tank for 30 minutes. Another solid display even when bloodied after his collision with Henderson.

Rob Herring 5: Keeps the lineout ticking over but we need more around the pitch. His ruck defence was exposed again yesterday. Kelleher needs to start.

Andrew Porter 6: His form has never really dipped despite his huge workload, scrummaged, carried and tackled well. His axis with Tadhg Furlong is going to be one to savour for Ireland but certainly not for opposition loose heads.

Tadhg Beirne 6: Did not really work for him on Sunday. Tried his heart out but his impact at the breakdown and around the pitch were much less marked than a week before.

Ian Henderson 8: One of the standout Irish players, who led from the front. It was no coincidence that Ireland looked a bit rudderless, when he was off the pitch being patched up.

Rhys Ruddock 6: Great to see a very deserving player back on the pitch. A very solid return to the Irish jersey complemented by his normal huge work rate.

Josh Van Der Flier 6: Like Beirne worked hard as usual without much return. A fully fit Dan Leavy is probably what Ireland need packing down on the openside.

CJ Stander 7: Received practically every kick-off and was triple tackled at times. He was one of the only Irish players generating front foot ball and did not stop for the whole 80 minutes.

Jamison Gibson Parke 5.5: A real curate’s egg of a performance.Tried to bring tempo at the breakdown and kicked well at times. However, made an appalling read in defence to give France their first try. With so many good scrum halves in Ireland at the moment, it is time to let someone else have the chance.

Billy Burns 6: Shanked his first attempt at goal but orchestrated things reasonably well for the first thirty minutes before going off with a head injury. The jury is still out on Burns but is moving towards a decision that he does not want to hear.

James Lowe 6: Great going forward and used his big boot to clear Ireland lines on repeated occasions. However, unless he can sort his defensive reads, he is too much of a liability for an Ireland team that are struggling in attack to carry.

Robbie Henshaw 6: Like much of the Irish team tried hard all day without getting much return.

Garry Ringrose 7: Looked by far the most dangerous Ireland back and threatened to break through on a number of occasions, so much so that the commentators mused ‘just get the ball into Ringrose’s hands’.

Keith Earls 6: A much more solid outing from Earls who was good under the high ball and looked dangerous in attack. The Italy match is one to try someone else on the wing though.

Hugo Keenan 7: Another good performance from a player that is making 15 his own. Still learning but is undoubtedly the find of the last year for Ireland.

Replacements: It was a bit disjointed with all the injuries although Ross Byrne definitely looked more the part when he came on. It is a pity that Casey did not get one but hopefully will get the start against Italy. It was brilliant to see Tadhg Furlong continue his return to fitness.
Coaching Team: The set piece was again very solid and the defensive system seems to be improving. However, there is a lack of a progression in Ireland's attack who were wedded to kicking the leather off the ball even in the dying minutes versus France. There must be some progression in this department in the final three matches for the pressure on attack coach Mike Catt and Andy Farrell not to reach boiling point.

Next up
The Six Nations takes a break next weekend, with Ireland heading to Rome on Saturday week. However, there is a full round of Pro-14 fixtures this weekend with Leinster and Ulster travelling to the Dragons and Glasgow respectively on Friday night with Munster travelling to Edinburgh and Connacht hosting Cardiff on Saturday.