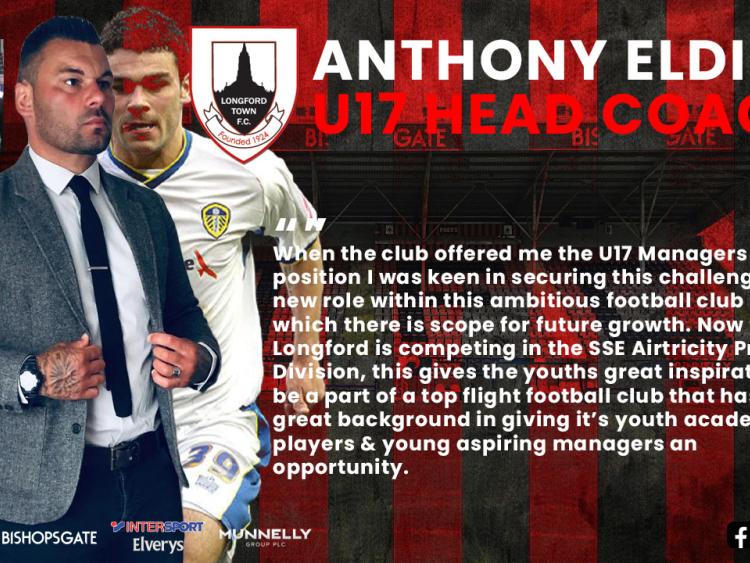 Longford Town Football Club has announced the appointment of Anthony Elding as the club's U17 Manager.

Anthony, who has previously played for Stockport County, Leeds United, Crewe Alexandra, Grimsby Town, Preston North End, Sligo Rovers, Cork City and Derry City among others, took over the U15 Manager's position in 2020 before being appointed to the 17's position for 2021 and is a current holder of the UEFA A Licence.

Anthony has made an instant impact in our underage system and has already been busy ahead of the new season.

Speaking to LTFC.ie , the FAI Cup winner and former England International shared his delight in being appointed;

"I am extremely delighted to be given this opportunity in progressing up as U17 manager after managing the LTFC U15's last season. We made fantastic strides last season where I have progressed a number of players from U15 up to the U17's. They bring great potential in being the future of the football club."

Anthony says, "I’m a driven, passionate, forward thinking, self-motivated manager with strong leadership qualities whilst applying excellent organisation skills. I am extremely adaptable with a 100% committed attitude and professional outlook on the game. When the club offered me the U17 Managers position, I was keen in securing this challenging new role within this ambitious football club in which there is scope for future growth."

He concluded, "Now that Longford is competing in the SSE Airtricity League Premier Division, this gives the youths great inspiration to be a part of a top flight football club that has a great background in giving its youth academy players & young aspiring managers an opportunity."