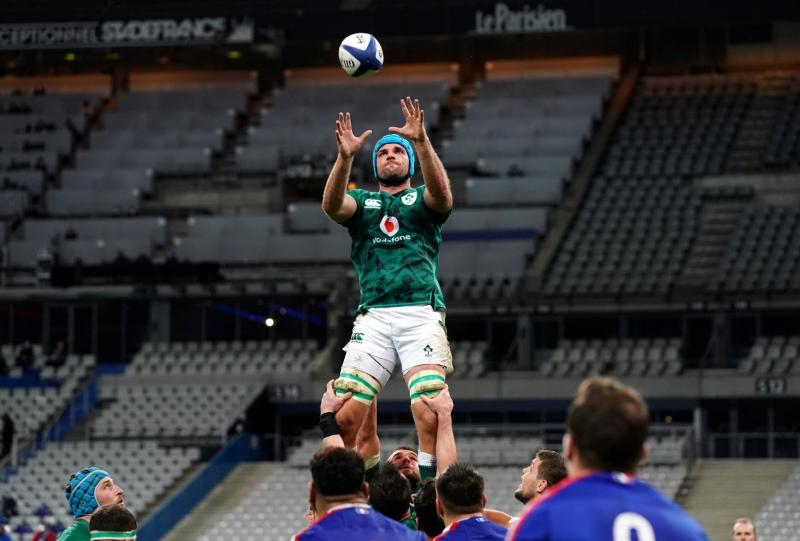 Ireland's Tadhg Beirne, whose father Gerry is a native of Ardagh, in lineout action against France last October Picture: Sportsfile

The 2021 Six Nations kicks off this Saturday with Italy hosting France at 2.15 followed by the Calcutta Cup meeting of England and Scotland in Twickenham at 4.45.

Irish fans have to wait until Sunday for their first match away to Wales.

Firstly, it is a great bonus during these turbulent times that the Six Nations is going ahead at all, with France's worries over the UK Covid variant threatening to ‘poop the party’.

Even allowing for France after all their concerns sending their U20s team to Portugal for a training camp, where they had their own outbreak of Covid-19.

So, what are the general expectations for this Championship?  Probably, England or France for the title, a battle between the Celtic Nations for the best of the rest title and Italy to retain the Wooden spoon.

It is hard to see much change to this, as although Ireland have put their Celtic cousins to the sword in the Autumn window have been continually off the pace against England in recent years.

Saying that but for set piece wobbles and an inability to finish off chances, Ireland should have won in Paris in November.

So, what are the positives for Ireland going into this Six Nations.

Firstly, it is nearly an injury free squad bar Jacob Stockdale, who should be available for the Italy match, secondly Tadhg Furlong is fit again and thirdly the appointment of Paul O’Connell, who although lacking coaching experience will bring a drive and a playing track record that has to be respected.

His brief will obviously focus on sorting out the Irish lineout and mauling, which has regressed in recent years.  If he can do this, then it is possible Ireland can turn over one of the big two, France or England, when they visit the Aviva stadium.  If he does not, it could be a long tournament and could signal the door for Andy Farrell, two years out from the World Cup.

Ireland are still reliant on the aging Johnny Sexton, with all the other pretenders such as Billy Byrnes and Ross Byrne flattering to deceive to date.  It will be a huge step forward, if one of the later takes the reins and steps up to the mark.

Overall, it will be a good season to pick up three wins and finish solidly mid table.  Is a Championship run for Ireland impossible, no but it will certainly need a lot of things to go Ireland's way to stop France and England?

The first match against Wales is likely to set the tone, win and anything is possible, lose and huge pressure is on.  At the moment France are the coming European side with a great coaching ticket including Wales/Lions former defence coach bringing a structure and discipline to a side who are bursting with grunt up front and young talented backs.  In their scrum-half Antoine Dupont they have a superb ‘Petit-Général’ who is arguably the world's leading player at the moment.

The inevitable decision was made during the week by the IRFU to cancel the rest of this season's Men’s and Women’s All Ireland League (AIL) League competitions due to the resurgence in Covid.  As the competition involves teams travelling the length of Ireland it was no longer feasible.  Leinster rugby competitions are heading the same way, you can find statements from the IRFU/Leinster branch below in this regard.

However, at least we have the consolation of the Men’s Six Nations going ahead, which will hopefully be some solace for rugby players, coaches, administrators and fans during these tough times.

Statement from the IRFU on the All Ireland League (AIL)

“Following a meeting of the Union Committee, it has been decided that the 2020/21 Energia All-Ireland Leagues for men and women will not proceed, due to the on-going impact of Covid-19.

The Vodafone Women’s Interprovincial Series will not take place until the 2021/22 season.

The IRFU and the four provinces will now work with clubs to look at the completion of the Energia Community Series and to review alternative forms of rugby, such as Lucozade Sport Touch and VW Tag, which may provide players with much sought after rugby later in the year.

“As Covid-19 continues to impact our lives we had to make the difficult decision to cancel the 2020/21 Energia All Ireland Leagues and the Vodafone Women’s Interprovincial Series. A huge amount of work is on-going, and we continue to look at avenues that may provide players and clubs with the rugby that they love.

“In the meantime, we will continue to innovate and develop education opportunities that can help players develop skills beyond the traditional forms of training for the game. With over 10,000 players signed up to our ‘Level Up’ workshops, we are helping players develop understanding and skills that will stand to them for many seasons to come.

“Our commitment to players and our clubs remains clear – we will continue to adopt a flexible approach to season planning and will proceed with rugby when cleared to do so by government guidelines.”

Following the statement issued by the IRFU (above) that this season’s AIL has been cancelled Leinster Rugby would like to make clear that if a window of opportunity presents itself before the end of the season, we will indeed get some club rugby played.

With that in mind the club season in Leinster will be extended to 31st May.

The IRFU in its press release also states it will review, along with the four provinces, alternate forms of rugby which may provide participation in rugby for players.

So, the message is that Leinster Rugby will facilitate the resumption of rugby before the end of the season if allowed.

Please note this does not apply to schools or youths.

Two rearranged fixtures went ahead at the weekend in the Pro-14 with Leinster travelling to Llanelli to face the Scarlets and Munster travelling to Italy to play Benetton Treviso.  Munster made thirteen changes from the side that lost to Leinster the previous week with only Mike Haley and Gavin Coombes retainedIt nearly had the feel of any intercounty team, with the Wycherley brothers starting together for the first time, the brothers Scannell also starting (Rory and Niall), while starting winger Liam Coombes and back-row Gavin Coombes are cousins.  Munster won the game 16-18 due to a last minute JJ Hanrahan drop goal.

Leinster racked up another bonus point win despite also ringing the changes 25-52.  From an Ireland point of view it was heartening to see the return of Tadhg Furlong who on his day is one of the best tight heads in the world.  He played a solid 40 minutes and looked well on the pace and is probably now going to be in the Ireland squad to face Wales on Sunday.  Furthermore, Dan Leavy looks like he is getting back to his best, winning man of the match, along with impressive tackle and carrying stats and bagging a try for himself.  Tough to know who Ireland and Leinster are going to leave out instead of him though!

All collective training is currently suspended in line with Government and IRFU guidelines.  At the moment, there is no date for a resumption of activities but needless to say we will be ready and willing as soon as we are allowed to do so.  It is possible that a Rugby 7s programme will take place during the Summer to allow players to get back playing rugby.  Rugby 7’s on faster harder pitches is normally a great spectacle.

We would urge all our players and members to keep active during this time.  The IRFU are currently running a series of free webinars for players and coaches, which can be accessed at the following link https://www.irishrugby.ie/2021/01/19/registration-open-for-new-level-up-player-workshop-series/    Why not keep your rugby brain ticking and sign up for the workshops?  Also our CCRO, Dylan Quinn will be posting a series of rugby related challenges, which you can do at home on his twitter page https://twitter.com/quinn_dylan

IRFU Your Club Your Country Survey

The IRFU are inviting your feedback on the recent Your Club Your Country draw, which saw Longford RFC raise over €7000 thanks to generosity of our members and friends, the survey can be accessed via the following link: https://www.surveymonkey.com/r/Z7CHKRK