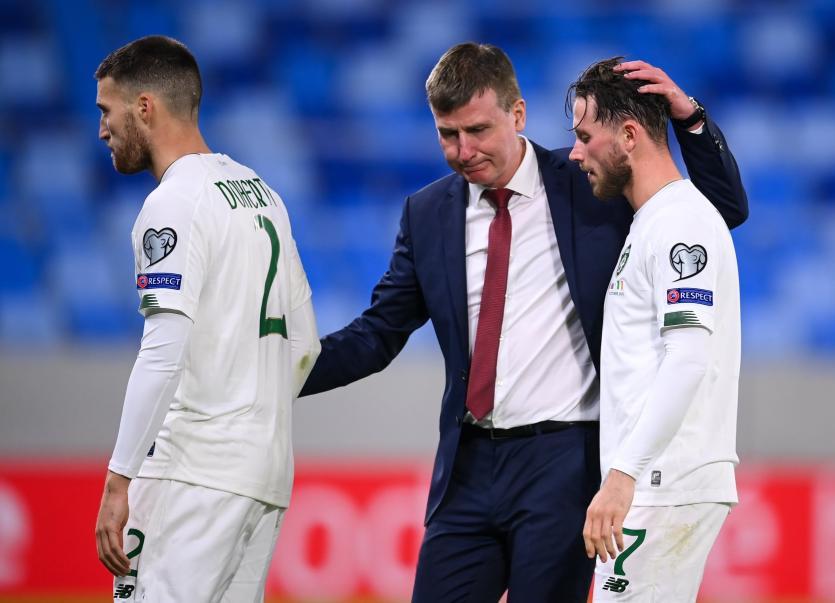 The Republic of Ireland’s UEFA EURO 2020 dream is over following a 4-2 penalty shootout defeat to Slovakia in the Play-Off Semi-Finals.

Marek Rodák was the hero for the hosts in Bratislava saving from Alan Browne's spot kick. With Ireland needing to score to make it 4-3 in the shootout Matt Doherty saw his penalty strike the crossbar to send Slovakia through.

It was a cruel result for Stephen Kenny’s side who were full of attacking enterprise and high tempo but were unable to get the goal their display deserved.

With so much riding on the game, the opening 20 minutes was as an edgy affair. Ireland’s patient play kept the hosts penned in their own half for a sustained period but found they found it tough to breakdown the Slovakian defensive line.

The first real clear-cut chance came in the 36th minute. A cross field ball from Doherty fell to Conor Hourihane in the area. The Aston Villa man played it to James McClean to fire towards goal and as it looked to be heading towards Callum Robinson for a tap-in, Martin Valjent got it clear to keep Ireland at bay.

Slovakia had a great chance to take the lead on the stroke of half-time. The hosts counter-attacked from an Ireland corner and while the Irish defence were able to slow the breakaway for a moment, Ondrej Duda curled an effort to the far corner forcing a fine save from Darren Randolph to tip around the post. From the resulting corner Duda found room for an overhead but it was off-target.

Ireland had a huge chance in the 70th minute. Enda Stevens advanced into space and found Browne in the 18-yard-box, he steadied himself and fired off a shot but Rodák was able to match his effort and palm it away.

Slovakia were still looking dangerous and a few minutes later Shane Duffy produced a goal-saving clearance to deny them a lead. Substitute Lukáš Haraslín was left in space in the area, he composed himself and while his shot went beyond Randolph the captain was on the line to clear away.

In the 85th minute there was another glorious chance for Ireland. David McGoldrick weaved his way through the Slovakian defence. He laid it off to Robinson who fed it to Browne who quickly shifted it to Hourihane, just yards out from goal, but the midfielder’s attempt was cleared off the line. It would be the final chance of the 90 minutes.

Towards the end of the first half of extra time, Browne was involved again this time hitting the post. Callum O’Dowda found space on the left and turned it to Browne whose flicked effort bounced off the foot of the upright

The second half of extra time was uneventful but for Robbie Brady’s free-kick striking the side netting and it ultimately came down to penalties.

Hourihane and Brady were successful from the spot for Ireland but the crucial moment came when Rodák saved from Browne.

Ján Greguš scored to leave it to Doherty to keep Ireland in the contest but the Tottenham Hotspur defender saw his penalty come off the crossbar and Slovakia were through.

"They showed a tremendous team ethic. As the game progressed I felt we were in ascendancy and looked like we really wanted to win it.

“We had good chances but couldn’t get the goal to win it. The players gave everything of themselves. The determination to try and get to the final was evident. It’s a cruel way to lose on penalty kicks. I can’t ask more of the players.

"This group of players gave everything for their country."