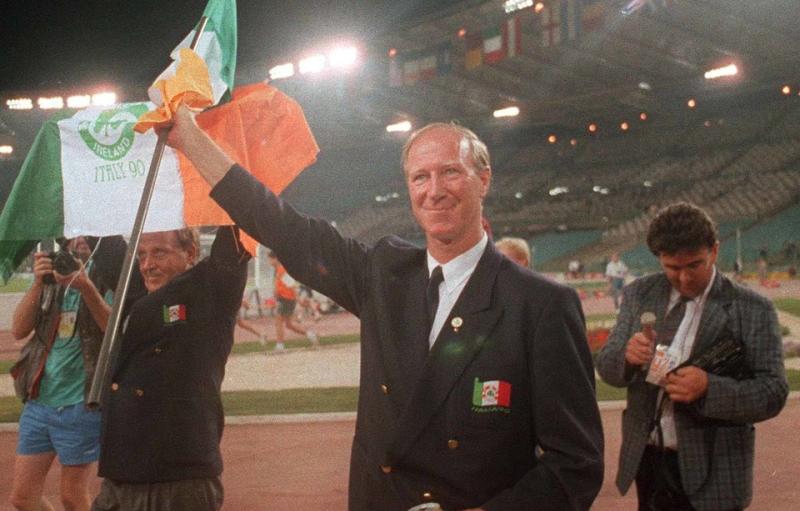 Former Rep of Ireland soccer manager Jack Charlton, who will be laid to rest on Tuesday

THE Football Association of Ireland (FAI) is calling on Jack’s Army and Irish radio stations to remember Jack Charlton in song next Tuesday as football says goodbye to the former Republic of Ireland manager and World Cup winner.

Big Jack’s funeral will take place in his native Northumbria on Tuesday and the FAI want fans to play ‘Put ‘Em under Pressure’ one more time to mark the occasion with a celebration of his extraordinary feats with the national team.

In conjunction with fan groups You Boys In Green, the Confederation of Republic of Ireland Supporters Clubs and the Irish Supporters Network, the FAI are calling on fans to wear green for the day and singalong to their favourite Italia’90 song at 12.30 pm to coincide with the conclusion of Jack’s funeral.

The FAI are also asking all Irish radio stations to play Italia ’90 anthem ‘Put ‘Em Under Pressure’ at 12.30pm next Tuesday afternoon as a national tribute to Jack.

“We have all mourned Jack Charlton and many tears have been shed since his death last Friday – Tuesday is our chance to say goodbye with a smile on all our faces,” said FAI President Gerry McAnaney.

“Jack Charlton and his team put many smiles on many faces between 1986 and 1995, at two World Cup finals and a European Championship, and we should remember him with an Irish send-off next Tuesday.

“As President of the FAI, I am asking Irish fans to wear green for the day and to salute Jack in song at 12.30 on Tuesday afternoon as his family are saying their final goodbyes in Newcastle.

"It would also be a really fitting gesture if all our radio stations here in Ireland could come together and play ‘Put ‘Em Under Pressure’ in unison at that time as their own tribute to the great man.

“Because of COVID-19 we cannot give Jack the send-off he deserves. We are talking to Jack’s family and looking at ways to commemorate his service to Irish football in the future but for now, I think it would be magnificent if we could make some noise for Jack one last time next Tuesday.”

Irish fan groups at home and abroad are backing the final call to arms for Jack’s Army ahead of Tuesday’s funeral in Newcastle.

A spokesperson for YBIG said: “While all Ireland fans look forward to commemorating the passing of Big Jack in what he turned into ‘Fortress Lansdowne’ once supporters can safely return to the stadium, it would be fantastic to see the nation hold its breath to the soundtrack of his voice one final time.

“And as it was the era of Jackie’s Army mobilising that first saw the Ireland shirt displayed en masse across the world when we really shook ‘em up at Euro 88, Italia 90 and USA 94, it feels fitting to send a legend off with the wearing of the green.”

The Irish Supporters Network and the Confederation of Republic of Ireland Supporters Clubs are also adding their weight to the Jack tribute.

A CRISC spokesperson said: “Unfortunately due to current circumstances Irish football fans will not be able to say their farewells to Jack in the traditional setting of the next Ireland home game but this is a great opportunity for fans at home and abroad to come together and pay our due respects.

“When Jack arrived in 1996 what emerged over the next 10 years could never have been envisaged but the memories and the pride instilled in those of us who were soldiers in Jackie’s Army will never be forgotten. Let’s make this the richly deserved tribute that the great man earned and deserves.”

The FAI’s Book of Condolences, available at www.fai.ie, has already attracted over 18,000 signatures and messages of support for the Charlton family.