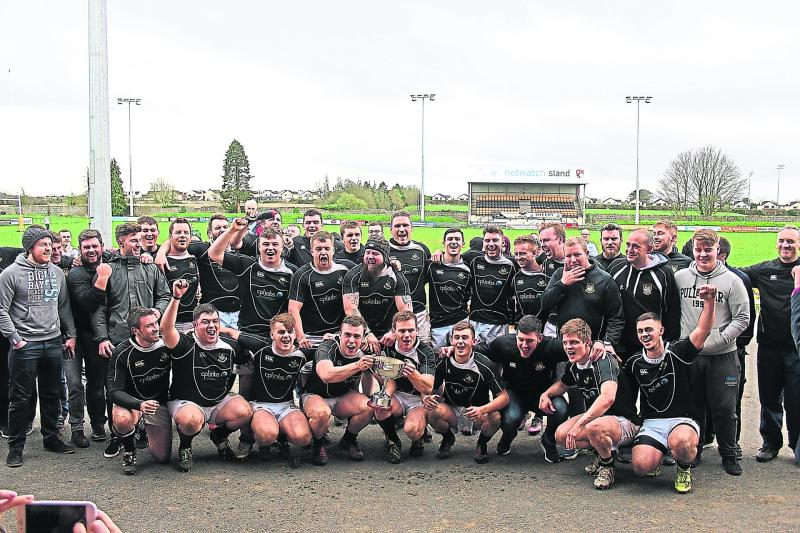 Flashback: The victorious Longford Rugby Club First XV squad pictured with the Leinster League Division 2A Cup following their win away to Carlow in March 2017

It has been a while since I wrote full notes as Covid-19 brought a halt to rugby activities across the globe. The good news is that it is looking very definitively like we have turned the corner and are now inching back toward a resumption of international, provincial and club rugby.

This is a special set of notes which will outline different activities that have been happening in the club over the last few months. Although there has been no rugby played or training taking place a lot has been going on behind the scenes!

Thank you
The Board and Members of Longford Rugby Club would like to thank all front line staff who were any way involved in providing medical care or testing or keeping the country functioning during the crisis especially any of your members.

If you know any of our members that went over and above during this time please email a short story to lrfconnects@gmail.com so we can feature them over the next few months in our notes.

We would also like to commend the people of Longford and Ireland on their sacrifice during the crisis which has allowed us to look forward to playing rugby again in the near future.

LRFC Connects
Longford Rugby Club launching the ‘LRFConnects’ initiative during the Covid-19 crisis to make sure that no club members or friends would be left isolated and to keep our members talking to each other, realising that loneliness during the lock down could be a big problem.

As always our members delivered in spades with our members making a special effort to give a call to anyone who was on their own or was cocooning. Our younger members also stayed in contact and talked about rugby and much more and cannot wait to get back on the pitch.

One thing for sure is that the Covid crisis showed the importance of sport and rugby in everyone’s life. Our club's importance in day to day to life is easy to take for granted but hopefully if one good thing comes out of this crisis it is that all our members, players and friends will redouble their efforts to help out in the club as it is a tough show to keep on the road and is done by our brilliant volunteers.

If you can volunteer even a small amount of time to help out in any capacity from coaching to administration, making some sandwiches for youth games or anything, no matter how small, please email lrfconnects@gmail.com or contact any club member.

Return to rugby
The IRFU recently published a plan aimed at enabling clubs to be back playing competitive rugby by the start of September.

The first part was appointing a Covid-19 Officer for the Club and we are glad to say that Gerry Larkin has accepted the post.  Undoubtedly Gerry will bring great vigour to the role. Gerry will be working with assistant officers to help prevent any spread of Covid-19. All members are asked to cooperate with Gerry and officers at all times.

All things being equal and assuming that we get the go ahead from the government, contact training will be allowing from the end of July with a view to playing our first competitive game at the start of September.  As it is an evolving situation stay tuned to the notes for fixture, training and playing updates.

The full plan can be found at: https://www.irishrugby.ie/running-your-club/return-to-rugby-for-clubs/ 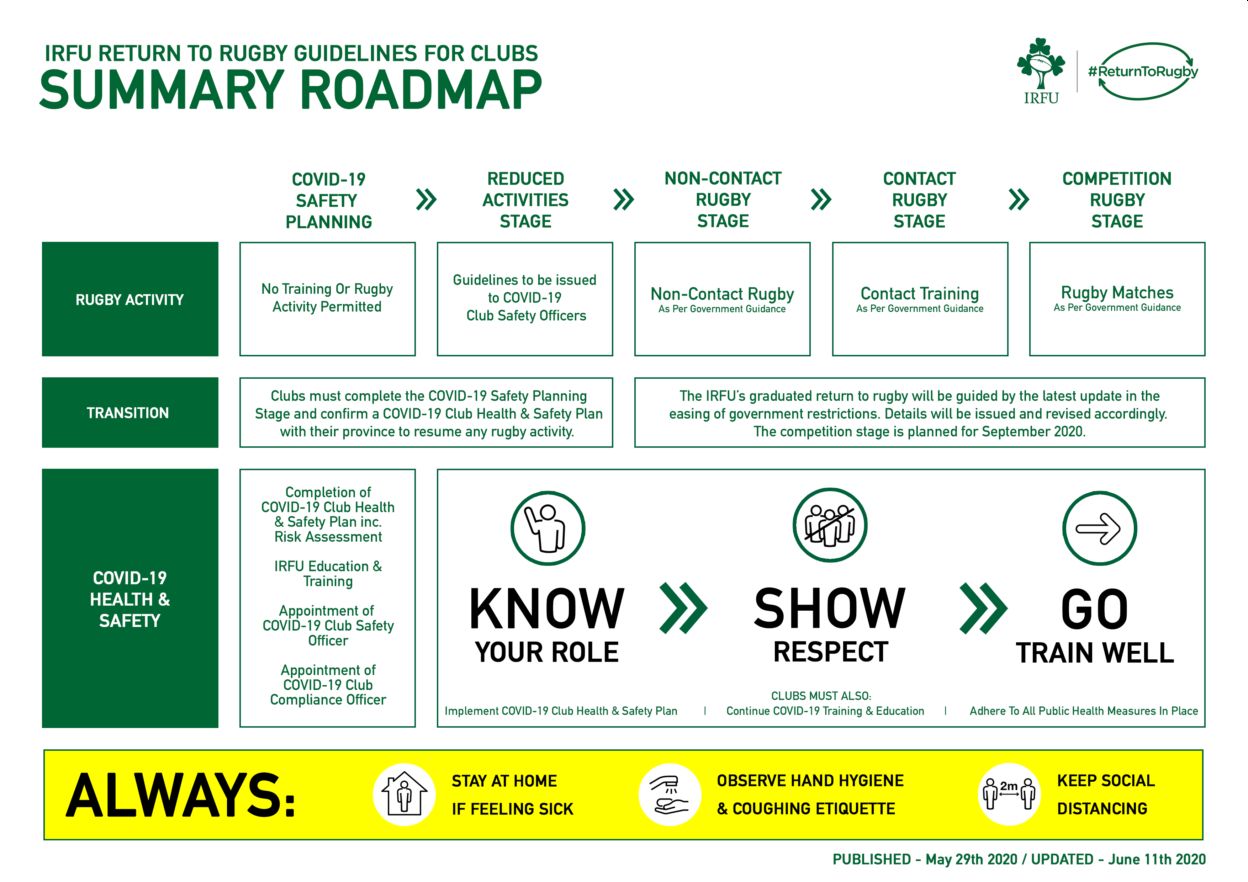 We usually would have our end of season awards done and dusted by now, however it was not possible to hold them during the crisis.

Our Senior Men’s 2nd XV won the league this year, so it was felt that a virtual ceremony was not a proper way for the trophy presentation and to honour their achievements.

We hopefully will be able to organise a proper awards evening during the Summer to kick off the new season and to celebrate last season. We will update you as soon as something concrete comes together!

Most of our members will now probably be very familiar with virtual meetings via Zoom or similar. In order to facilitate the widest possible participation is has been decided to hold this years AGM of Longford RFC on the Zoom platform.  It will take place on Tuesday July 14 at 8pm.  More details will follow.

This is an important AGM as includes the bi-annual election of a new Board: President, Vice-President, Chairperson, Honorary Secretary, Chair of Rugby, Chair of Finance and Chair of Administration. If you would like to go forward for any of these roles a nomination form endorsed by at least two paid up members should be forwarded to Hon. Secretary David Bird by email to dbbirdy@gmail.com by Friday, July 3.

You must be present at the AGM via Zoom for your nomination to be valid.  All motions need to be forwarded by Tuesday June 30.

Official notice of AGM to follow, it will include how we propose to hold the meeting (rules etc).
Voting on any motions/nominations will be concluded by Sunday July 12 to allow for counting if required and forms to be presented to the AGM if required.
Usual AGM rules apply; only paid up members can bring motions/vote and attend.
Please forward all queries to dbbirdy@gmail.com.

We have very good news about the Sin Bin Event Centre which will reopen at the end of the June as per Government guidelines for members and friends of the club under the Management of Andrew Reynolds. Andrew is a very experienced entrepreneur/operator in food/beverages who will bring some exciting changes to the Sin Bin.

There will be a focus on providing great high quality food. Andrew currently operates the Coffee House on Dublin Street and also has businesses in Carrick on Shannon and in other locations in the area. We would like to wish Andrew the best of luck.

Finally we would like to thank Kris and his family for many years of hard work in the Sin Bin. Kris became synonymous with Longford RFC with his smile and great service being a great asset. Best of luck in your future endeavours, we hope you will come to visit us during the season.

Volunteers/Players for the coming season

Longford Rugby Club is a progressive club that fields Men’s/Women’s teams at Senior Level and has more than 400 Mini/Youth Players training every week both male and female from U6 right through to U18.

We are looking for more players, coaches and volunteers at all levels of the club.  If you would like to join Longford Rugby Club at this exciting time, please contact any club coach or volunteer.

We welcome players who have not played for the club before, returning players and even players who would like to take up rugby.  We have state of the art facilities and a great coaching/playing structure.

For Mini/Youth Enquiries please email lrfconnects@gmail.com and we will put you in contact with the appropriate person.

It is great to see Professional Rugby restarting with the Super Rugby Aotearoa Competition kicking off this weekend in New Zealand with two great games between the Highlanders and the Chiefs and the Blues and the Hurricanes.

One thing that caught the eye is that referees are focusing much more on the break down with a focus on tackling players promptly releasing the ball, players attacking the rucks staying on their feet and no side entry for either side at ruck time.  There were a lot of penalties given away by all the Kiwi teams for ruck infringements.

These will undoubtedly go down as players/coaches adapt, the idea is that by strictly applying existing laws it will generate faster ball and also make the ruck safer.  The ref was also keeping an eye on the offside line making sure the defending team were on side.  No doubt Head Coach Glenn Baskett was a keen watches of the matches and will already be devising new training routines to make the most of the rule changes.

At the moment there is no definitives dates for the return of rugby with the whole fixture list up in the air.  However, hopefully we should see Pro-14 rugby return in September. As regards internationals we will update you as soon as we know.

Hopefully we will be able to watch a few matches in the Sin Bin soon!