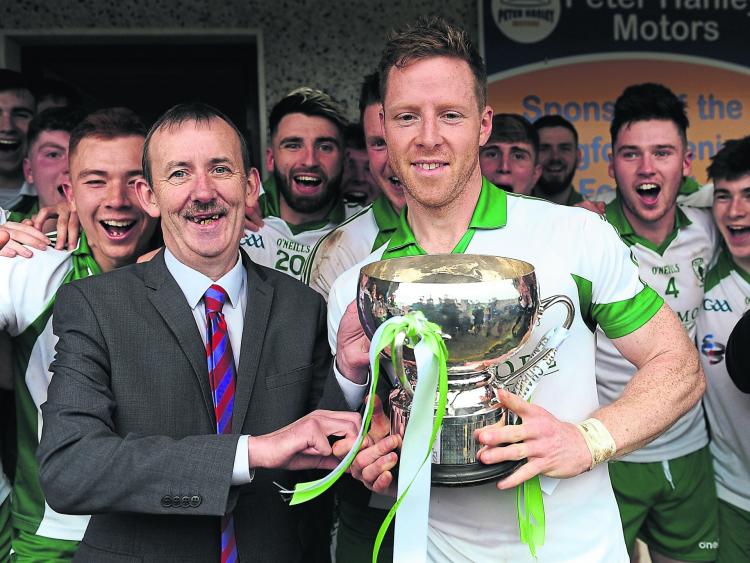 When he isn’t learning to play the guitar or trying his hand at baking, during these unprecedented times of the Covid-19 coronavirus lockdown, you’ll find Killoe’s 2019 Longford senior football championship winning captain, Sean McCormack interviewing personalities for his new podcast ‘Talking Sport With Stan’.

Having starred with Longford on the inter-county stage for ten years, and being more accustomed to being interviewed as opposed to posing the questions, Sean, a primary school teacher in Fermoyle, in the parish of Lanesboro, candidly admitted that he was initially reluctant to step behind the mic.

He revealed; “Recently, I was out for a jog with my wife Helena and this idea of creating a podcast came into my mind. I shared it with her and she told me to go for it. Now my only obstacle was myself! The notion of setting up a podcast was way outside of my comfort zone. I decided to pursue it bit by bit.”

He reached out to his friend, Stephen Lynch, Granard, who had recorded ‘Longford’s Greatest Fifteen’ with various personnel.
“This idea of Longford’s Greatest Fifteen was created by Martin Nevin, who played with Longford Slashers and it kept many of us entertained during the beginning weeks of this current lockdown. I asked Stephen about the process involved and he decided that we would record one with him and see how it went. With my first one recorded, the wheels were in motion.”

Sean has since recorded podcasts with brothers Shane & Oran Kenny (Rathcline), Niall Mulligan (Longford Slashers), Diarmuid Masterson (Dromard), David Barden (Clonguish) and Daniel Pettit (Dromard), and the reaction has been very positive thus far.
“People have been very kind and generous with messages and sharing how much they are enjoying it,” he said.

Sean, who was man of the match when Longford won back-to-back Division 4 and 3 league titles in 2011 and 2012, is remaining tightlipped about future guests but he assures us ‘there are some great people lined up!’

And since GAA is his main sport, it is obviously an area he can talk about with ease. However, he wants to delve into other sporting areas. “I have a few coming up. Stay tuned!” You can access Sean’s podcasts via Talking Sport With Stan on YouTube.

During his own career with Killoe and Longford, Sean said he experienced a lot of ups and downs. “As a result, I feel I have a lot to talk about and sport is certainly an area I have huge interest in. As a proud Killoe and Longford man, I have a genuine interest in the sportsmanship taking place within our own county. I am curious about other people’s experiences in sport. How certain things happened. How they reacted to these experiences, and how it has shaped them.”

He also hopes his podcast will shine a light on and harness an appreciation for Longford talent.

“One thing I am very aware of is that we regularly get the opportunity, through various media to celebrate the great sporting heroes from the top five counties in Ireland and rarely, if ever, is there much time allocated to smaller sporting counties like Longford.

“As a primary school teacher, I notice that children can easily name the Dublin or Mayo players but wouldn’t be able to name a handful of players from the Longford Senior team. I would love it if this podcast helped to promote and renew our appreciation for the talent and commitment of our own sports people.”

So the name, ‘Talking Sport With Stan’, where did that come from?

“My nickname is ‘Stanley’. It’s probably an alter ego too ha! Everybody is familiar with my name through the GAA, but behind every Sean there is a Stan! Behind every player, coach, athlete there is another person, another life. That’s what I want to explore and hear about. I want to shine light on our sports people, hear their experiences and life choices.”

With six podcasts complete, he is thankful to his guests. “So far, everyone I have contacted has been willing to share their stories with me. I am so grateful for this and please God many more will be willing to contribute over the coming months.”
Stephen Lynch’s goal sealed a dramatic 3-7 to 1-12 victory for Longford over Kerry in a famous 2004 National Football League encounter at Glennon Brothers Pearse and he was Sean’s first guest.

“As he is a friend, I was already aware of his sporting background and I knew he had a great story to tell. I learned so much from that conversation and his back-story is quite unique. It was intriguing.

“Brothers, Oran and Shane Kenny were next to take the hot seat. Playing for Rathcline, Oran the younger brother has broke onto the county scene this year with great success, while his older brother Shane has taken a break due to injury. I wanted to hear their stories from two very different viewpoints.”

After each podcast, Sean identifies areas to improve on and progress from there.

Sean created ‘Talking Sport With Stan’ as a hobby and during this period of lockdown, his podcasts have entertained and gone down a treat with his audience.

He was the National League joint top scorer with Bernard Brogan in 2013 and at the start of this year decided to ‘call it a day’ in terms of his own gaelic football career.

How has he coped with the Covid-19 crisis and lockdown? “I am working from home as a teacher which is a whole new experience. I am enjoying trying new things. I have adopted new methods of training, learning the guitar and trying my hand at baking! I try to structure my day and maximise my time as best I can. Thankfully, all of my family have not been ill during this time. We are very fortunate.”

He praised those on the frontline during this pandemic. “How can we pay tribute to these people as it will never be enough. The bravery, willingness and sacrifice they are all making for the good of our country. It is just remarkable and an example to us all.”

Sean’s dad Terry was a massive influence in his life before he died suddenly in April 2015. An accomplished rugby player and gaelic footballer, Terry managed Killoe to Connolly Cup glory in 2012 and ‘14, with his sons Sean and Padraig figuring prominently in those triumphs.

Poignantly, Sean remembered his dad. “My father Terry always encouraged me to seize an opportunity when it is presented in front of you. I’d like to believe that he is enjoying the chats from above and is still as proud of Longford sports as he always was.”

#8 Joe McCormack
Joe suffered a career changing injury in 2004. He shares his journey in over coming these challenges and fulfilling his sporting dreams. @KilloeGAA @AughawillanGAA @mercyballymahon @OfficialLDGAAhttps://t.co/o3mDoCUmxG

#9 John Fitzpatrick
Vice chairperson of Longford Athletics Club and former Fr. Manning Gael, John's story is one which carries a lesson we all need to take on board! Thank you John!@Longford_Leader @FrManningGaels @OfficialLDGAAhttps://t.co/aGhiUApZoe