Longford’s Darragh Greene swimming for Ireland at the European Championships 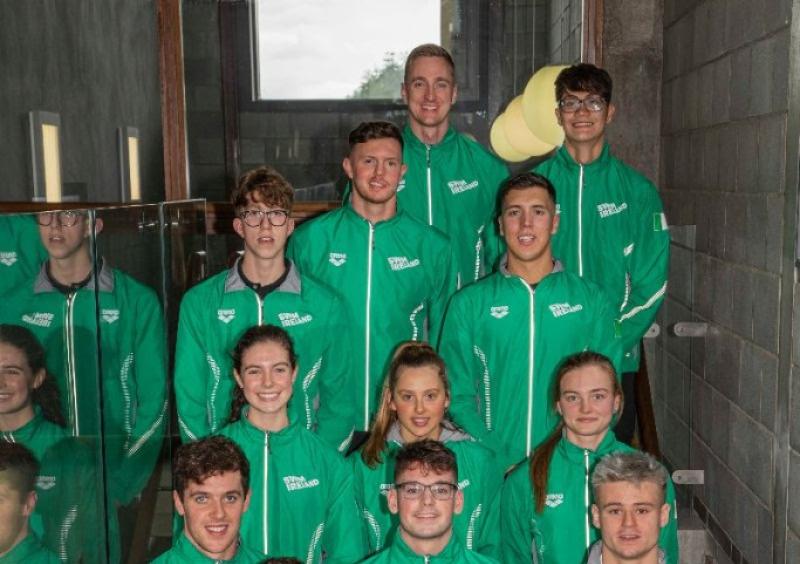 Darragh Greene pictured with some other Ireland team members for the LEN European SC Swimming Championships in December.

Swim Ireland have announced 19 athletes who will travel to Glasgow, Scotland in December (4th – 8th) to compete in the 2019 LEN European Short Course Championships (25m) including Longford star Darragh Greene who has qualified for the 2020 Olympics in Tokyo.

Eleven senior and eight junior athletes have been selected for the 5 day event. with all team members travelling on from these Championships to compete in the 2019 Irish SC Championships (12th – 15th December) in Dublin the following week.

The Selection Policy allowed for both a Senior and Junior cohort to be selected to the Championships, with selections made from individual’s performances in their identified summer benchmark meet in relation to the IOC’s 2020 Olympic Qualifying Time.

Darragh Greene will be hoping to make a big impact in the Breaststroke events while Shane Ryan will be looking to emulate his performances from one year earlier where he collected a bronze medal at the World Short Course Championships in China.

Swim Ireland Swimmer of the Year Brendan Hyland also had a top 10 finish at those championships in the 200m Butterfly. At the 2017 event in Copenhagen, Jordan Sloan and Mona McSharry were finalists with Conor Ferguson reaching a semi-final.

National Performance Director Jon Rudd, Team Leader for the Irish Team said, “This event always helps athletes to gain some clarity on how their season is progressing towards the following summer, and we all know that our Trials in April and the summer of 2020 have an extra importance this season. Our team is a blend of experience and youth, with a number of our athletes able to progress through the rounds and challenge for the podium, whilst at the same time, it is an opportunity for a number of our very promising junior athletes to start to feel their way in senior swimming as their junior years will be over and done soon and this is the swimming world in which they will need to learn to operate going forwards.”