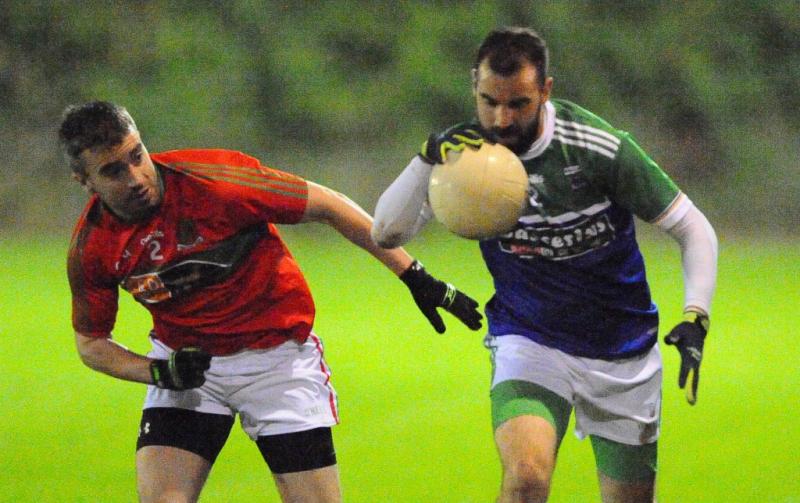 Needing to win by three or more points to retain their Peter Hanley Motors Longford Senior Football Championship status, that’s precisely what Mostrim did on Wednesday night at Emmet Park, Killoe, with a 2-14 to 1-13 victory condemning Rathcline to relegation to the intermediate ranks for 2020.

Denis Connerton’s Rathcline can feel somewhat aggrieved as only one minute of additional time was played at the end of the second half despite a number of substitutions and stoppages.

Rathcline defeated St Mary’s Granard in round one of the relegation series by 3-14 to 1-16, and in round two Granard got the better of Mostrim by 1-11 to 0-12, so it all boiled down to last night’s crunch encounter.

It was in the 58th minute that Joe Dempsey fired Mostrim ahead by four points, 2-14 to 1-13, and even after this score, the Rathcline men had sufficient possession to peg back the arrears but they failed to do so.

They kicked a wide in the first minute of stoppage time but there was no time to create another opportunity as the referee’s whistle was blown after Mostrim keeper Ciaran Gallagher had kicked out the ball.

So after the three match relegation series ; all three teams involved finished equal on two points thanks to a win apiece and it was Mostrim’s superior score difference of +2 (for 2-26 against 2-24) which ensured their senior survival with Rathcline +0 (for 4-27 against 3-30) and Granard -2 (for 2-27 against 3-26) being relegated to intermediate.

With so much at stake, it was an entertaining game of football with some excellent scores and for most of the 60 plus minutes it was end to end stuff.

Two goals inside the opening eight minutes by Cillian Lynn laid the foundations for this win for Mostrim.

Just two minutes had elapsed when Lynn plundered for his first goal. Thomas Doyle and Darragh Doherty followed up with points as Mostrim made a fantastic start, 1-2 to nil.

In the fifth minute Rathcline keeper David Mulvihill pulled off a save to deny Padraig Jones. Cronan Flood registered Rathcline’s first score when he kicked over a point. Brian Farrell hit over an excellent point before Shane Kenny kicked over a neat free in the seventh minute.

Jones set Lynn up in the eighth minute for his and Mostrim’s second goal. Doherty followed up with a great point to stretch the lead to eight points, 2-4 to 0-2.

Credit to Rathcline, they rallied and got themselves right back into contention. Iarla O’Sullivan kicked over a fine point and that was followed by a pointed free from Oran Kenny. In the 15th minute O’Sullivan found Shane Kenny and he rattled the back of the net to cut the lead to just a goal, 2-4 to 1-4.

Sean Noone and Lynn got points for Mostrim while Oran Kenny scored from a free in the 18th minute. Points from Hannon and Brian Farrell (‘45) gave Mostrim a six point lead at the break: 2-8 to 1-5.

Oran Kenny (free) and James Hanley kicked over early points for Rathcline in the second half but two pointed frees from Doherty cancelled these out, 2-10 to 1-7 after 37 minutes.

Matters were simmering nicely and down the other end Hanley was on target again for Rathcline and Oran Kenny followed up with an excellent point to reduce the deficit to four points, 2-12 to 1-11.

In the final ten minutes both sides were guilty of making mistakes and giving away possession.
Joe Dempsey was just seconds on the field when he put Mostrim ahead by five points. O’Sullivan and Oran Kenny (free) replied for Rathcline to leave three between the sides in the 55th minute, 2-13 to 1-13.

With normal time nearly up Dempsey scored a point. Rathcline had a chance in the first minute of stoppage time but kicked a wide. There was no time for any other scores as Mostrim secured their four point win.