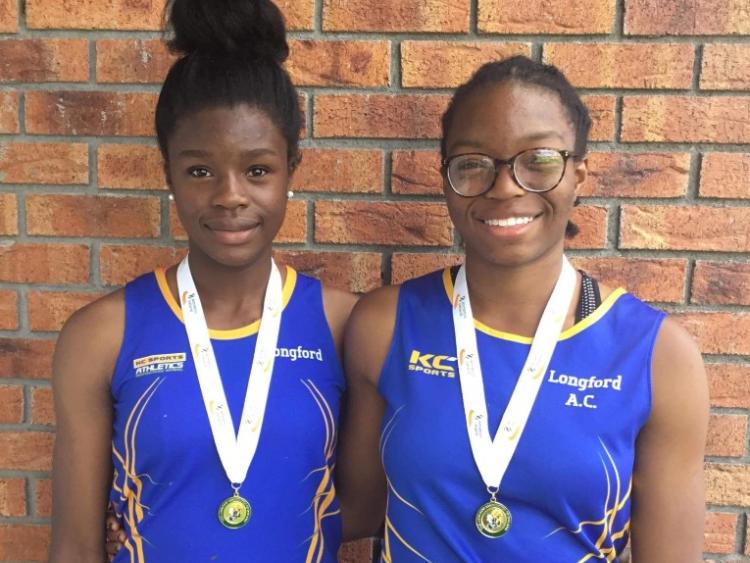 Sisters Funmi and Yemi Talabi from Edgeworthstown celebrate winning Athletics Ireland National titles in the 100m sprint on Day 2 of the National Juvenile Championships in Tullamore.

Sprinting was the main event on Day 2 of the Irish Life Health National Outdoor Juvenile Championships at Tullamore Harriers Stadium on Saturday last and Edgeworthstown sisters Yemi and Funmi Talabi were in top form in winning  the National title in U-15 and U-18 Girls 100m.

Funmi is well known at Connacht level as she has consistently been ‘the fastest girl’ since she started competing at U-9 level.  In early June she won the All-Ireland Schools Minor Girls 100m with a new pb of 12.35 seconds so she was in great form going into the National Juvenile Championships.

Funmi clocked the fastest heat time, 12.67 seconds, of all 15 girls and advanced to the final to win in 12.43 seconds. Next up for Funmi will be the trip to Limerick to compete in the National Community Games Finals in August.

The success for Longford Athletics Club  continued as Yemi won her heat and had the fastest time of all 14 runners going into the final.  She stormed out of the blocks and clearly owned the race as she powered across the finish line at 12.20 seconds to take the National Outdoor title for the second year in a row. It was definitely a proud day for the girls’ mother, Adetutu Talabi, to have both daughters stand tall on the podium receiving National gold medals.

It has been a very busy few weeks on the track for Yemi winning Bronze, 12.27 seconds, at the All-Ireland Schools Championships, Gold, 12.35 seconds, at the Tailteann Schools Inter-provincial Games, finishing 7th in the National Junior\U20 Championships  and competing at the BAUHAUS Junior Gala in Mannheim, Germany achieving her season’s best performance of 11.89 seconds.

Not yet seventeen years old it is fantastic that all these achievements have culminated in Yemi being selected for both the SIAB (Schools International Athletic Board) in Swansea, Wales and the Ireland U-20 Women’s 4X100m relay team competing at the European U-20 Championships in Boras, Sweden from the 18th - 21st July 2019. She is part of the six member squad that includes top sprinters Patience Jumbo-Gula, Lauren Cadden and Alannah McGuinness.

Longford Athletics Club coaches and juvenile members are looking forward to following Yemi’s progress as she travels this week for European competition.