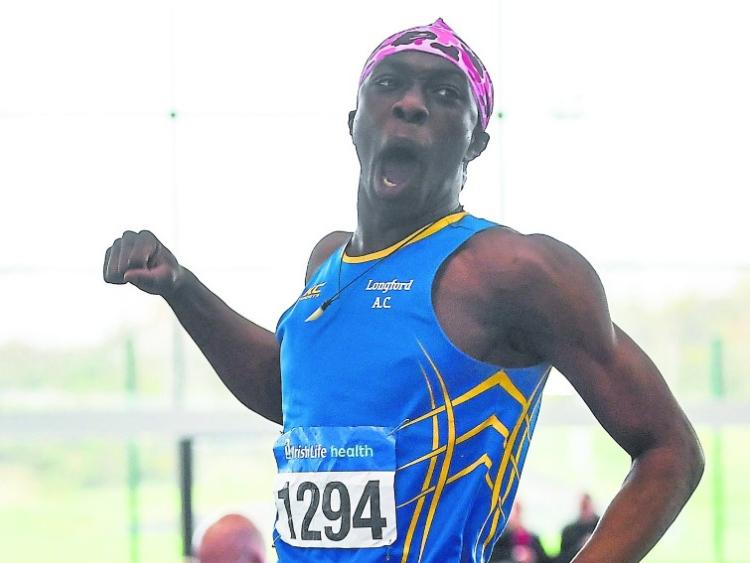 Longford Athletics Club had four athletes entered in the National Junior and U-23 Outdoor Championships last Saturday in Tullamore. The Junior category comprises athletes aged 16-19 years with three age groups competed together in one category as U-20.

All the best upcoming talent in athletics from across the country were in competition on the day, fine tuning their preparations ahead of the European U-18 and U-20 Championships later this month in Baku, Azerbaijan and Boras, Sweden respectively. Cian McPhillips is injured and has had to withdraw from the European U-18s. He will be taking several weeks off as was recommended.

As predicted High Jump Champion Nelvin Appiah lived up to the Athletics Ireland preview that was posted ahead of the event “Nelvin Appiah (Longford) is sure to grab the crowd’s attention in the men’s high jump”.  He got the crowd behind him supporting him with a clapping beat as he took Gold at 2.00m in the Junior Men’s High Jump.

Nelvin adds this National title to his collection as he has already had a busy summer winning the All-Ireland Schools Senior Boys High Jump with new pb of 2.10m and competing with team Ireland at the European Games in Minsk with the highlight finishing third in his group and adding 7 team points.

Aaron Kelly and Gospel Idahor both competed in the 100m and 200m heats but missed the qualification cut off for finals. Gospel continues to improve in Triple Jump finishing in 8th place over with new pb of 9.96m which is a 12 inch improvement from her gold medal Connacht performance in early June (9.61m).

Further National completion continues next weekend in Tullamore which will see several of Longford AC’s talented teenage athletes take to the track at the Irish Life Health Juvenile All-Ireland Championships in sprints and middle distance events.