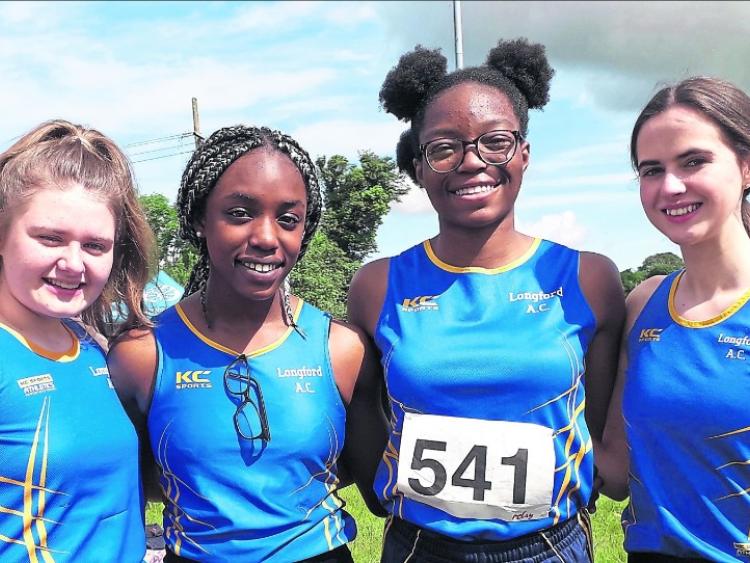 Gold was the colour of the day as Longford Athletics Club teenage athletes came home from Sligo IT with 10 Gold, 4 Silver and 2 Bronze medals at last weekend’s Western Region Provincial Outdoor Championships.

The U-19 Girls 4X100m Relay team of Gospel Idahor, Adeyemi Talabi, Regina Rawle and Aoife Maher got the day off to a great start winning their event outright. It is an achievement to see the girls staying together throughout the winter to make a team.

The very full timetable of events for over 450 athletes in the U-14 to Masters age groups took eight hours to complete such was the variety of races on the track and eight separate field events: hammer, discus, long jump, javelin, high jump, pole vault, shot putt and triple jump.

Gospel Idahor and Nelvin Appiah made a clean sweep in U-19 events and between them they are 2019 Connacht Champions in 100m, 200m, 400m, triple jump and high jump.

This lines them up for a very busy summer of Athletics Ireland National competition in both juvenile and junior age groups. Nelvin, who was selected for Team Ireland in Senior Men’s High Jump,  is preparing for departure to Minsk at the end of the week for the European Games.

Killian Rawle and Funmi Talabi were the other two sprinters to take the Connacht Outdoor title in the 100m. After a strong run in the U-19 girls relay Adeyemi Talabi won a pair of Silver medals in U-18 100m and Long Jump. In the very evenly matched U-16 age group where every fraction of a hundredth of a second makes a difference Sarah McPhillips won Bronze in the U-16 100m and 5th place in the 200m.

The focus then turned to the middle distance runners with Kate Hagan and Jack Gallagher both impressing on the day. They put themselves under pressure running multiple distances with very little recovery time. Kate was in great form finishing 4th in the 1500m in the morning and managed to win Gold in the 800m and Bronze in the 3000m in the afternoon.

Jack Gallagher ran very well to take Silver in the 800m and even with very heavy legs he was back on the track with essentially no break to take his second Silver in the 3000m. Cian McPhillips was not running on the day.

With all the Provincial Championships now finished it is straight into all the outdoor action this summer. Longford Athletics Club takes great pride in seeing their juvenile athletes continuing to exceed expectations as they go forward to compete on the National and International platform.