Punchestown Tips: The horses worth backing on Day 3 (Thursday) at Punchestown 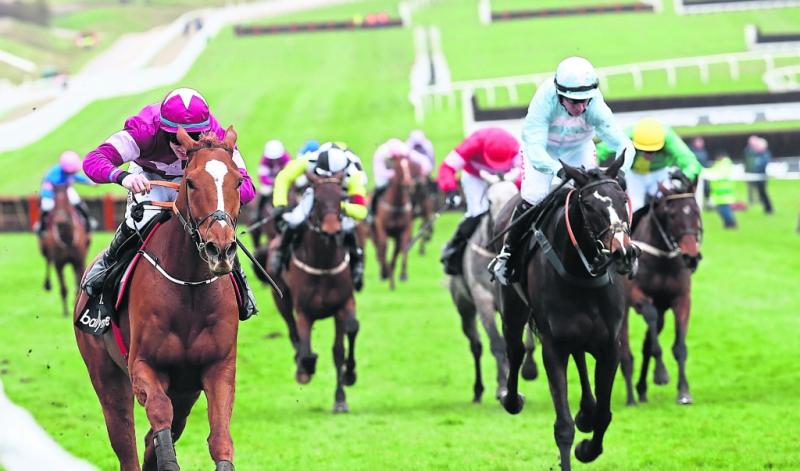 Punchestown Tips: The horses worth backing on Day 3 (Thursday) at Punchestown

15:40 - This is an interesting handicap hurdle and is ideal for eachway backers with 26 runners. The value here is in PUT THE KETTLE ON (18/1) for the in-form pairing of Henry de Bromhead and Rachael Blackmore. She's got a manageable weight after a 98-day break and her recent form is strong. She was just eight lengths behind Mister Blue Sky in a maiden hurdle at Wexford last October and bettered that again by beating Gypsy Island by a length at Navan last November. Mister Blue Sky was third in a Grade 1 here earlier this week and Gypsy Island also picked up a five-length win in a grade 3 flat race on Wednesday. Put The Kettle On will be primed for this after a break and is on an upward curve despite two indifferent runs in December and January of this year.

16:15 - IMPACT FACTOR (11/2) is intriguing here for Jessica Harrington and Puppy Power, a trainer/jockey combination that often performs well at Punchestown. This horse will like the ground and arrives after a career-best performance over fences at Fairyhouse at Easter. He was good over the obstacle and pulled away after the last to beat Quamino by five lengths. This horse can certainly get in the frame here if reproducing that form.

16:50 - Josie's Orders will be far too short for most punters in this and although he'll more than likely oblige for Enda Bolger, the better value is in the eachway market. I'm going for MTADA SUPREME (16/1) who was third and seven lengths behind Josie's Orders at this track back in February. That was on similar ground and with a claimer taking a further seven pounds off his back, Mtada Supreme is more than capable of getting closer to the odds-on favourite.

17:30 - This is a puzzle and while Bapaume, Bacardys and Aux Ptits Soins picked up respectable form behind Paisley Park in the Stayer's Hurdle at Cheltenham, I'm taking a risk on DORTMUND PARK (25/1). He has been absolutely outclassed by Apple's Jade on his last two starts, but this time last year, he was a ten-length winner of the Grade 1 champion novice hurdle at this festival. The ground has now gone in his favour with the rain this week and I reckon he'll see out the three-mile trip well, considering he was going away well when landing a 2M 6F novice hurdle on heavy ground at Thurles in January 2018. He has an awful lot to find on recent form but with bookies paying three places for eachway players, he's a tasty proposition if recapturing last year's sparkle.

18:05 - ELWOOD (14/1) is an intriguing runner here in another competitive handicap hurdle. He got the hang of things over hurdles in March, finishing four-lengths second behind Ronald Pump, the same horse that beat the favourite for this race, My Sister Sarah, by nine lengths at Fairyhouse. Elwood made two abysmal starts late last year but after a 102-day break, he return to the same track (Cork) for that runner-up performance. There are plenty of unknowns with this one but Gordon Elliott is a master at placing his horses and Davy Russell is the main man in the saddle. I'd expect a big performance.

18:40 - This is a select field with no less than five of the eight runners coming here on the back of wins, none more impressive than the DUC DES GENIEVRES (2/1), my idea of the winner. The Willie Mullins-trained six-year-old caught the eye in a big way at Cheltenham when he landed the Arkle by 13 lengths from Us And Them, who subsequently finished second again, this time to Ornua at Aintree. Both of those reappear here and Duc Des Genievres has their measure, so the main danger, and it's a big one is Defi Du Seuil for Phillip Hobbs. This could be the race of the day because Defi Du Seuil was a game winner of the JLT at Cheltenham, beating Lostintranslation, a subsequent Aintree winner in a tight finish. That form reads better on paper but Duc Des Genievres has won his last two races by a cumulative 28 lengths and is still on a steep upward curve.

19:15 - Although an odds on shot, it's worth sticking ELFILE (10/11) into the multiples. When last seen, this horse was a good second, five lengths in arrears, to Honeysuckle, Henry de Bromhead's unbeaten mare. Elfile reversed the Cheltenham form with Eglantine Du Seuil and Tintangle, putting herself right in contention for this. She has also already accounted for the second favourite here, Black Tears, at this track back in January. All the indicators are pointing towards a repeat of that here.

19:45 - You could throw a blanket over these in the market and rightly so as all six runners have tasted victory at some stage in their short careers to date. You Raised Me Up is the most experienced as a six-year-old but has been off the track for nine months. Gordon Elliott is bidding for a first success in this race and could get his head in front thanks to FURY ROAD (4/1). Ridden by Louise O'Neill, this horse has had two proper racecourse starts, finishing fifth on debut before getting the hang of things to land a flat race by seven lengths on good ground. He'd won a point-to-point prior to switching to Elliott's yard so has the experience and potential to do well in this sphere.