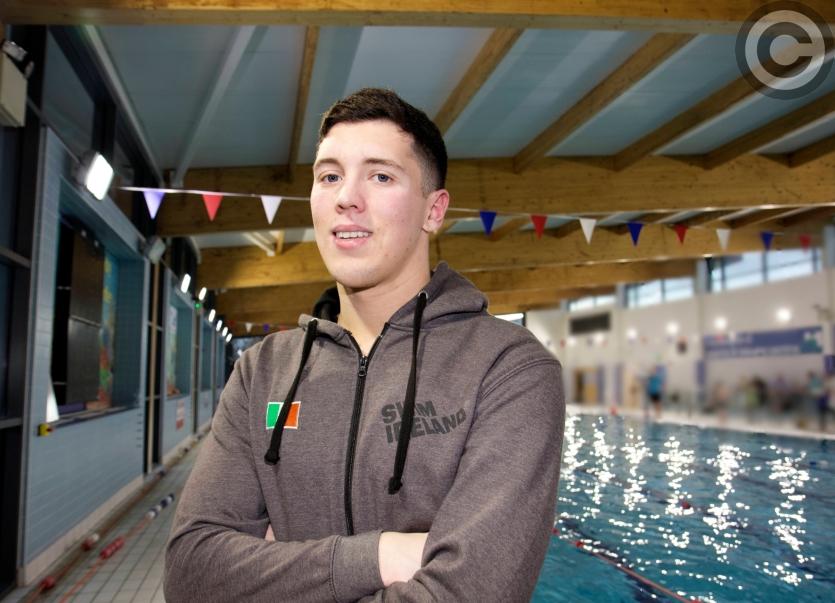 It is a wonderful achievement for Darragh who set a new Irish senior record and championship record in clocking 2:10.05 on his way to winning the 200m Breaststroke Final at the recent Irish Open at the National Aquatic Centre in Dublin.

Greene, who has made significant progress under the guidance of National Senior Team Head Coach Ben Higson since transferring his training base to the National Centre (Dublin), is currently on the crest of a wave in a splashing success story.

For the second year in succession dynamic Darragh won three Gold medals in dominating the Breaststroke events (50m, 100m and 200m) at the Irish Open Championships and continues to break records in his impressive winning streak.

Sporting excellence  runs in the blood of the Greene family from Newtownforbes with Darragh’s sister Aisling a key figure on the Longford ladies football team who take on Meath in the Division 3 National League semi-final this Saturday.

And let us not forget that their father Brian had the proud honour of playing in goals for both Longford Town FC and the County senior gaelic football team during his distinguished sporting career back in the past.

In the aftermath of his magnificent feat in completing another hat-trick of National senior titles, 23-year-old Darragh was back home a couple of weeks ago for a coaching clinic with Longford Swimming Club Sharks, Dolphins, Minnows and Seals spread over two evenings at the local sports & leisure centre pool.

The kids, ranging in age from 6 to 17 year olds, were thrilled to meet the man who has done Longford so proud with his remarkable exploits in the pool and the target now is to qualify to compete in the 2020 Tokyo Olympics, the pinnacle of his superb swimming career.

Darragh has already reached great heights as he now looks forward to the World Championships in South Korea this summer, training six days a week in his preparations for the breaststroke events at this massive meet.

Breaking Andrew Bree’s 11-year-old Irish Senior Record in clocking 2:10.05 in the 200m Breaststroke Final at the 2019 Irish Open Championships was a huge boost for Greene as he grows in stature.

Bree, who had set the record in the event in the semi-final of the 2008 Beijing Olympic Games, was on hand to present the record certificate to Greene at the National Aquatic Centre.

Speaking after the race Greene said: “I would have been happy with a pb, the record is a huge bonus, especially an 11-year-old record. I’m looking forward to seeing what I can do in the summer now.”

Inspired by his parents Brian and Ann, the rise of former St Mel’s College student Darragh Greene to become one of the top athletes in the country is a great example to all young sporting enthusiasts.

Longford Swimming Club coaches Carmel Leahy, Liam Deely, Mel Magan and Ronan McNiven have all played a significant part in guiding the career of Greene down through the years and this dedicated people deserve a lot of credit.

All those early morning training sessions and extreme hard work have paid off for Darragh, a pure gold National swimming champion who is now on the World stage.

“My target at the World Championships will  be to achieve a lifetime best in the 100m and 200m Breaststroke and hopefully that will materialise.

“If my performances are good enough I might have a chance of getting through the rounds and maybe make a final appearance,” stated Darragh.

Qualifying for the Tokyo 2020 Olympics is obviously the dream and with the rapid way his swimming career is progressing there is a very good chance of that becoming a reality.

Greene will be heading to Paris in June to compete in the French Open and is heading for Japan in July for a training camp with the other members of the Swim Ireland Team.

“It was great to win the three National titles again this year and I can now look forward to my first World Championships,”  commented Greene who started out with Longford Swimming Club as a five-year-old.

“The Olympic Games are closer than ever and we are no less than one year away from our own Olympic Trials.

“With this in mind, opportunities and challenges such as those before us this summer must be used wisely – for both the moment itself and in preparation for Tokyo.

“We can all feel and see our progress and the summer of 2019 will be yet another important step for those of us seeking international success from Irish swimming.”