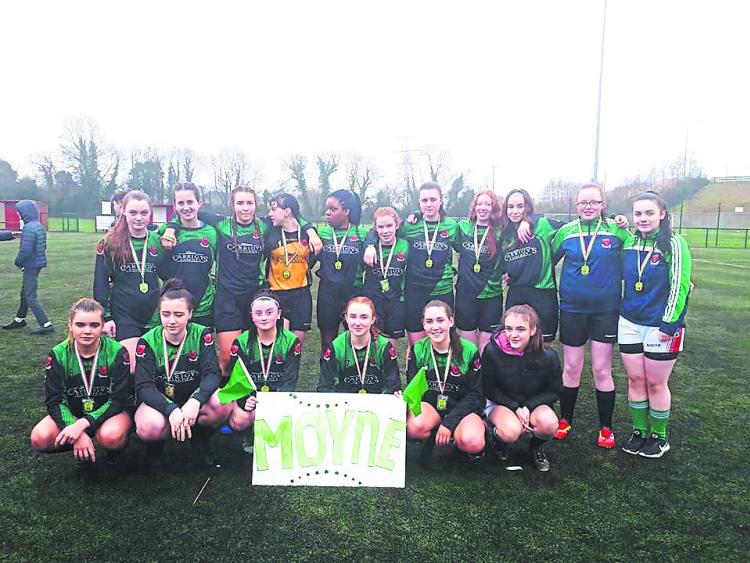 Moyne Community School U-17 girls soccer side who lost out to Presentation Secondary School Kilkenny in the FAI Schools Junior Girls Leinster ‘A’ Cup Final at the Leixlip United FC grounds.

Moyne Community School Under 17 girls soccer side fell just short in the Leinster Junior ‘A’ Cup Final on Thursday last, going down 2-1 after extra-time against the favourites Presentation Secondary School Kilkenny.

In a very exciting provincial title decider played at the Leixlip United FC grounds, Moyne battled back from conceding an early goal, equalising in the second half with a terrific effort from Kayla Brady. A goal in the first period of extra-time swung the final in favour of the Kilkenny girls who held on to secure victory.

Backed by the colourful and noisy Moyne supporters who had travelled in numbers to the Kildare venue, and along with the Kilkenny fans, they created a terrific atmosphere and cheered the team throughout the match.

Moyne had reached the final after coming through five rounds, and the team had demonstrated tremendous character in all their games. This was called on again as Presentation Kilkenny started brightly and the Moyne defence of Ciara Sutton, Teni Alaba, Karen McLoughlin and Molly Clarke had to be alert to keep out the dangerous opposing attack.

Strong goalkeeping from Kate Madden who was excellent throughout the final kept the score at 0-0 early on.

Before Moyne had fully settled they found themselves 1-0 down when a KIlkenny attack down their left wing broke through the Moyne defence and despite the best efforts of keeper Kate Madden, the ball inched over the line.

Moyne then began to settle and the midfield four of Anna Moorhead, Kayla Brady, Johanna Sheridan and Nessa Farrelly grew into the game and began creating chances for strikers Aoife Donnelly and Ciara McKeon.

The remainder of the first half was very even with chances at both ends with the Moyne netminder Kate Madden excelling when called upon and the hard working Ciara McKeon going close up front.

Moyne started the second half brightly and good play from midfielders Anna Moorhead, Johanna Sheridan and Nessa Farrelly led to the equaliser with the ball finished to the net by Kayla Brady.

The rest of the match ebbed and flowed with chances at both ends with timely interventions from defenders Teni Alaba, Ciara Sutton, Molly Clarke and captain Karen McLoughlin keeping the score at 1-1. Clarke was actually injured late in the game but displayed great determination to finish out the final.

After sustained pressure in the first period of extra-time a chance fell to the Kilkenny girls and the matchwinning goal materialised. Moyne battled bravely right to the end but could not find a way past the resolute Kilkenny defenders as Presentation SS held out to capture the Leinster ‘A’ Cup title.