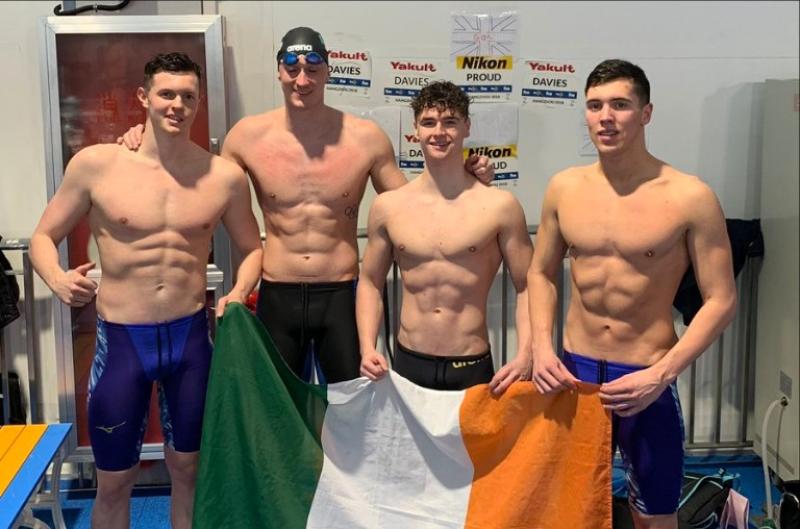 Team Ireland swimmers concluded a remarkable World Short Course Swimming Championships in China on Sunday morning with yet another Irish Record, taking the total for the 5 swimmers over six days of competition to eleven.

Conor Ferguson (Backstroke), Darragh Greene (Breaststroke), Brendan Hyland (Butterfly) and Shane Ryan (Freestyle) had all set individual records in their respective strokes across the week as well as a new record in the 4x50m version of the Medley Relay.

But this morning’s swim, knocked an astonishing 18 seconds off the previous record set in 1991. The quartet combined for a time of 3:27.23 to finish in 10th place overall, deleting the oldest men’s Irish short course record from the books, the previous record had stood at 3:45.66.

Speaking after the relay, the four were feeling positive, Greene saying "It was great to race together this morning, this was our second time racing together at a major championship, so just to get the experience is what we need heading into the Summer at World Championships, where we hope to qualify the relay for Tokyo 2020."

What a fantastic week in China for Darragh from Newtownforbes. Swimming for Team Ireland on Day 1 in the 100m Breaststroke on Tuesday, Greene clocked 58.91 in taking over a second off his previous best record of 59.93 for that event.

Darragh then stepped up with yet another Irish Record on Thursday morning. The National Centre Dublin swimmer took over 3 seconds off his previous best of 2:11.02 in the 200m Breaststroke to win his heat in 2:07.60. That time bettering Andrew Bree’s 2007 Irish Record of 2:07.95.

Speaking after the event 23-year-old Greene from Newtownforbes commented: "I’m delighted with my swim today, my main focus was just to work on my skills and get a pb in a morning swim, to be able to achieve an Irish Record at my first World Championships is a bonus.”

After achieving a 200m Breaststroke Irish Record on Thursday, Greene competed in the 50m Breaststroke on Saturday morning at the FINA World Short Course Swimming Championships in Hangzhou, China and he set another personal best time at the event touching in 27.43.

Darragh was also part of the Ireland men’s 4x50m Medley Team that set another Irish Record on Saturday. Darragh, along with Shane Ryan (a bronze medallist in the individual 50m Backstroke in China), Conor Ferguson and Brendan Hyland were impressive in the second heat touching in 1:35.05, knocking .58 off the record set at the 2017 European Championships to finish in 10th place overall.