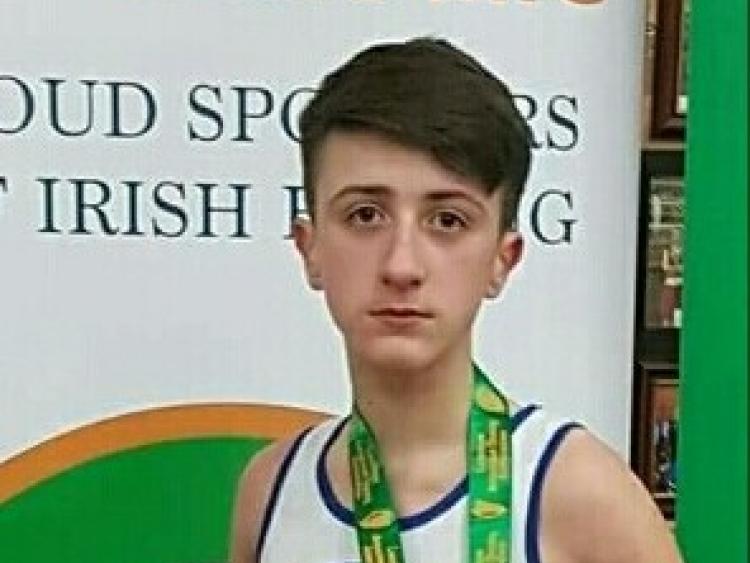 Michael Nugent, the  talented 13 year old boxer from Longford Town who is a  student at St Mel's College, won another provincial title at the 2018 Leinster Youth Boxing Championships in Newbridge, Co Kildare on Sunday last.

Michael is affiliated to the Olympic Boxing Club in Mullingar and is coached by former Olympian John Joe Joyce and his father Michael Nugent. Young Michael got things off to a great start in the quarter-finals against Darren Kelly (Paulstown Boxing Club, Co Kilkenny) in scoring brilliantly with a quick jab from head to body and controlled all three rounds to win  5-0.

Next up for Michael in the semi-finals was a tough opponent in Willie Delaney from Marble City Boxing Club,  Co Kilkenny. Delaney is a very talented boxer who enjoyed great international success last season winning the Hull Box Cup in England and received the award for best boxer in that tournament which is one of the biggest schoolboys and youths boxing events in Europe.

In the first round both lads were trying to counter each other but Nugent upped his speed through the second round and started scoring with explosive 2 and 3 punch combinations in catching Delaney cleanly. Michael’s movement was brilliant and he done the same in the third round to win his semi-final 5-0.

But the biggest test was facing Michael in the final against a Leinster champion last season, like himself a very good southpaw, Adam Tyrrell from Ratoath Boxing Club, Co Meath who had won his quarter-final and semi-final both 5-0 also.

It was extremely difficult to predict the outcome against the taller Tyrrell. As the first round got going both lads started off fast catching each other with punches in a 50/50 contest. But late in the round Nugent started to take over, finding his range and landing some great right hands in just doing enough to win a tight round.

Nugent came out for Round 2 and upped his game in starting to catch Tyrrell with solid left and rights to head and body and countering Tyrrell with great movement in clearly coming out on top. Nugent really turned on the style in Round 3, producing one of his best ever performances on his way to winning a second Leinster title.

Michael will now represent Leinster in the Boy 3 38.5kg Division in the All-Ireland Youth Boxing Championships in Dublin in April. And it was a great day for the Olympic Boxing Club in Mullingar who received the award for the best club in Leinster with 10 Gold and 3 Silver medals to their credit in what was a tremendous achievement.