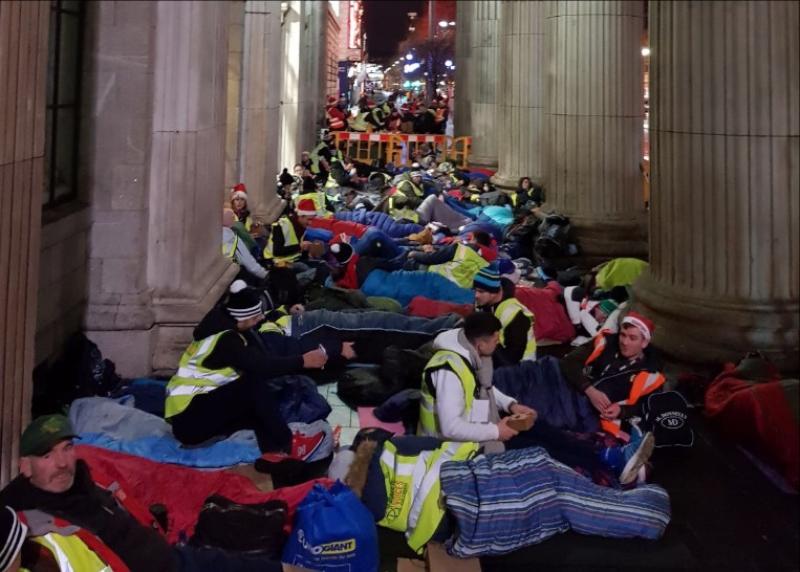 Last night, Saturday, December 16, over 400 former and current inter county hurling, football and camogie players, came together in 13 different locations in Ireland and abroad to show solidarity with the homeless by sleeping rough for a night.

The events included a nationwide minute's silence for those who have died on our streets. This was led by Fr Peter McVerry at the GPO in Dublin who congratulated the players on their efforts and said the crisis was worsening by the day and that it is very much a political issue.

A glimpse at the #SolidaritySleepout that took place outside the GPO in Dublin last night. A massive thank you to everyone who played their part in each of the 13 locations. Grá ❤️ pic.twitter.com/qQiVLaaB8F

The 'Solidarity Sleepout' initiative was the creation of Gaelic Voices For Change, a new social action group of past and present GAA inter-county players who are keen to use their profile to do more to make a difference.

To date an impressive just over €180,000 has been collected and will be as well as support charities that include the Peter McVerry Trust, DePaul, the Simon Community, Focus Ireland and the Capuchin Day Centre, Cope Galway, Thomand House, and Novas based in Limerick.

Former Wexford hurling captain Diarmuid Lyng led the Wexford sleep-out and was in a reflective mood after it wrapped up.

"The thing that struck me most was hearing the chorus of voices on the street sincerely dissatisfied with the Governments response to what is fast becoming a humanitarian concern. People walking around their fellow people, one up the other down, serves the humanity in neither.  People who spoke to us said that they accepted that they have a role to play too in their own behaviours, how they contribute to the issue, but fundamentally they feel that at a structural level, we are creating this problem by becoming economic slaves to vested interests in this land.  Accepting that is accepting of a miserable inequality for all concerned. This magical country with its beautiful people shouldn't be subjected to that reality. The Government must act in the interests of it's citizens and improve levels of social protection. It was also a privilege to stand with fellow players, everyone that joined together got far more out of it that they could possibly have imagined. This was always going to be an upside of this effort, more balanced players make better players, but that all played second fiddle to the issue at hand."

"When you are in a position to help the less fortunate especially living away from home and seeing and hearing how bad things have gotten I felt it was only right to help out. Being in Times Square for 12 hours in below freezing weather was frightening and hard to believe that people are actually sleeping in this cold weather. This experience has made me realise how lucky I am and I will hopefully continue to carry out charity work in the near future"

"My reflection on the night is how vulnerable you feel when you actually bed down for a night on the streets, how uncomfortable and unnatural it is and how inconceivable it is for someone to do that day in and day out. While I have a warm bed to go home to, many people do not have this luxury and for me this is simply not acceptable in 21st century Ireland."