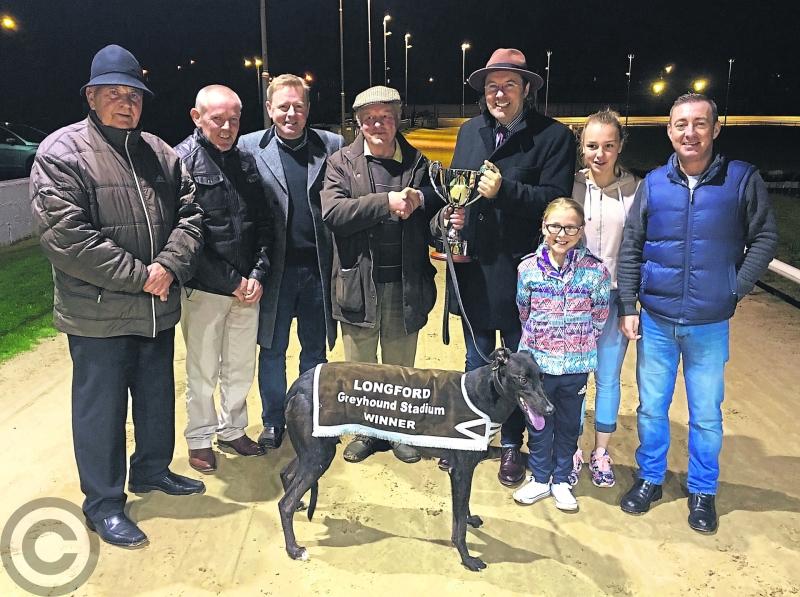 The Jim Valentine Memorial A5 525 Stake provided some splendid racing over the last number of weeks and the final took place at Longford Greyhound Stadium on Friday night last and was won by Urban Jet, owned by Reggie Roberts.

The final of the Jim Valentine Memorial, very kindly sponsored by Eddie Valentine and Davy Brennan, looked a match between the two market principles Coolronan Snowy and Urban Jet and so it proved.

Coolronan Snowy was away, as expected, to a very slick start and led into the opening corner. However, Urban Jet was ominously close as they hit the back straight and a fine injection of pace from him going into the third bend saw him hit the front. Once clear, the Reggie Roberts owned Urban Jet kicked on and came home with a couple of lengths to spare over Coolronan Snowy in a smashing 28.61 to land the €2,000 winners prize.

Pictured are Eddie Valentine (sponsor) presenting winning owner Reggie Roberts with the Jim Valentine Memorial Trophy after Urban Jet had run out an impressive winner of the €2,000 first prize in the final of the stake at Longford Track on Friday night last. Also in the picture are Kevin Dempsey, Davy Brennan (sponsor) and other members of the Valentine family.