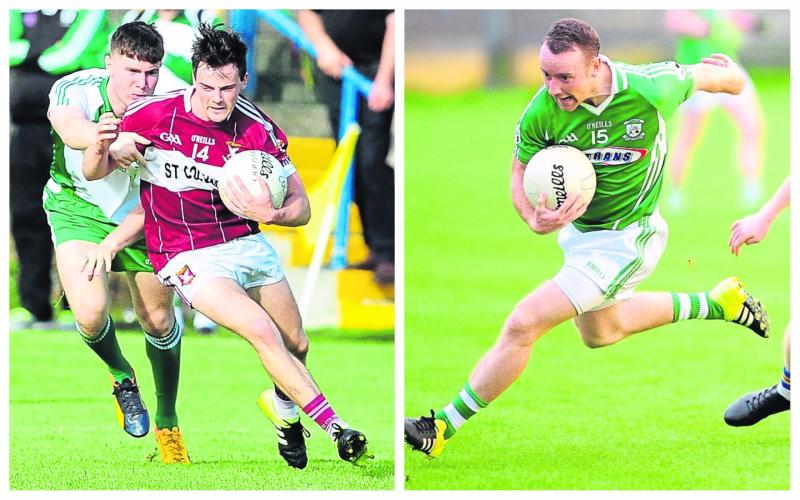 Mullinalaghta St Columba's (1-11) and Clonguish (0-14) will have to do it all again after a last ditch Jayson Matthews free ensured the county champions are still in the running to retain their Connolly Cup crown.

This evening's semi-final encounter was as entertaining as it was absorbing despite the wretched weather conditions that prevailed.

And it was Matthews who held his nerve to slot over a free deep into stoppage time and in so doing, preserve his side's status in this year's Senior Football Championship.

Matthews' last minute intervention was perhaps somewhat harsh on a Clonguish side, who for long periods, outplayed their more fancied north Longford counterparts.

The champions did, however, start the better with two quick fire scores from Matthews and fellow forward Rian Brady nudging them into a two point lead early on.

Clonguish rallied though, galvanised by a trio of sublimely struck Paddy Dowd scores to keep them firmly in the shake-up.

And but for a moment of laxness at the back which allowed Mullinalaghta's Conor McElligott to ghost in and punch into an unguarded net, Clonguish may well have gone into the half time break with a healthy lead to their name.

Instead, they went in at the break tied at 0-8 to 1-5 in front of a rain soaked crowd at Longford GAA headquarters.

When the sides re-emerged, it was very much a case of as you were with both outfits exchanging scores through Joe O'Brien and David McGivney.

The latter proved to be a particular thorn in the side of Collie Clarke and Dermot McCabe's men thanks to a five point personal haul, all of which came from dead balls.

But Clonguish are a much more cohesive and polished unit this season.

Inspired by some dogged defending from the likes of Darren Quinn alongside the guile of Paddy Dowd and Paul Barden, they more than matched the defending champions throughout.

Two points from O'Brien, one from a free and the other an exquisitely executed shot on the turn five minutes from time looked to have knocked the stuffing out of Mickey Graham's charges.

They say in times of adversity champions come to the fore and so it proved though as Mullinalaghta replied, first through McGivney and then via the pacey Matthews to safeguard the champions' Senior Championship hopes for another week at least.

On this evidence, the replay should be every bit as engrossing as this evening's first instalment.