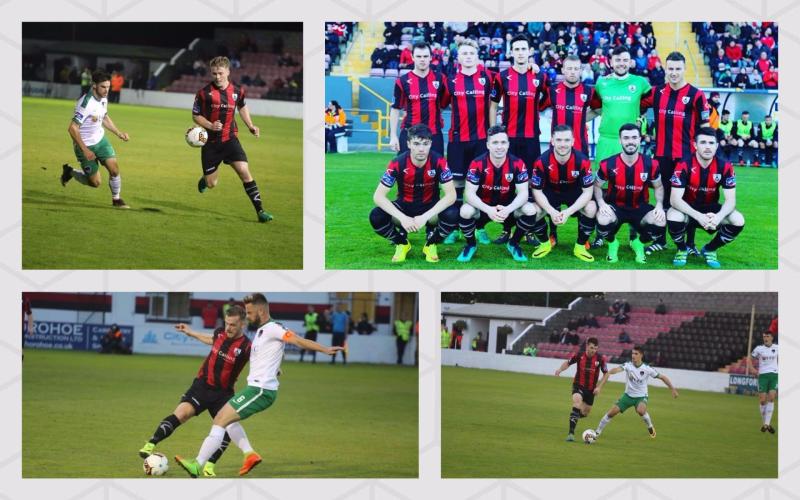 There was no cup upset for former Cork City player Neale Fenn in this Irish Daily Mail FAI Cup quarter-final at City Calling Stadium on Saturday night as his Longford Town charges slumped to a 4-1 reversal.

For the cup holders, John Caulfield’s Cork City, the League and Cup double is still very much on.

The gulf in class between the two sides was evident at times with the Premier Division leaders passing the ball around with ease and dictating play.

Gearoid Morrissey and Stephen Dooley had early chances before Cork City broke the deadlock in the 24th minute with Kieran Sadlier scoring direct from a corner. Four minutes later they doubled their advantage with Shane Griffin setting up Jimmy Keohane.

It was all City at this stage with the home side struggling to create any chance of note. In the 32nd minute Keohane forced a save out of Town keeper Jack Brady as John Caulfield’s side continued to apply the pressure.

In the 43rd City were awarded a penalty after Brady was adjudged to have taken down Karl Sheppard. Sheppard stepped up and slotted the ball past the netminder.

Things got worse for the home side in the 51st minute when City scored their fourth of the night; Conor McCarthy with a ball over the top and Man of the Match Sheppard finished for his second of the net.

Longford Town, cheered on by the fans in the 900 strong attendance, were much improved side after the break and did pull a goal back in the 64th when Peter Hopkins’ ball was directed into his own net by City defender Robbie Williams. Two minutes later David O’Sullivan’s effort was deflected out for a corner.

They had other chances late on but couldn’t find another way past City netminder Mark McNulty as City advanced to the last four of the cup.

Longford Town’s next home game is next week versus UCD. Kick off on Saturday, September 16 is 7:30pm.