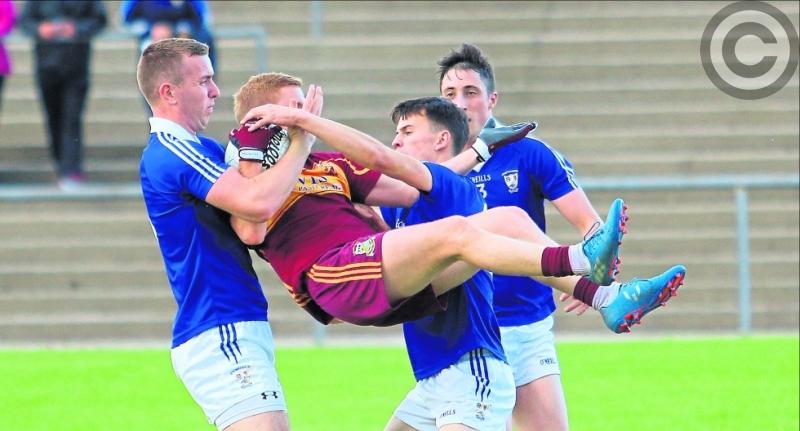 Fr Manning Gaels player Mickey Kelly caught in a tangle in this tussle with Granard opponents. Action from the SFC clash at the Dromard grounds. Photo: Syl Healy

Fr Manning Gaels kept alive their hopes of clinching a place in the Senior Football Championship quarter-finals by defeating St Mary’s on Saturday evening last in Pairc na nGael, Dromard and leaving the Granard side in serious trouble of being relegated to the Intermediate Championship.

It’s all to play for this weekend for the Gaels; a good win over Killashee coupled with Colmcille claiming victory over Ballymahon could see the Drumlish/Ballinamuck side book their place in the quarter-finals.

For Granard they have one game left to secure their senior championship status; they will face either Fr Manning Gaels or Ballymahon in a play-off with the loser being relegated.

Granard will have to improve dramatically on Saturday’s performance if they are to get the required win.

The Gaels were full value for their win against a Granard side that struggled throughout and were devoid of ideas.

In Pauric Gill Drumlish have one of the best players in the championship; the forward scored 1-1 but was involved in so much play. Nigel Kiernan also had a great game at wing-back.

Gaels got their opening score inside the first minute. Minutes later Gill rifled a powerful shot to the back of the net and then Kiernan followed up with a point to put five between the sides.

Granard’s first point came in the 11th minute through Derek Sheridan but the Gaels replied with fine points from Emmet Noonan and Petie Collum.

Kevin McGauran and Thomas Gallagher got points for Granard but they were unable to eat into Drumlish’s lead.

Just before the break Drumlish had a chance of extending their lead further when they were awarded a penalty; it was harsh on Granard.

Paddy Collum kicked the spot-kick over the bar as his side led by six points, 1-7 to 0-4.

Drumlish bossed the opening minutes of the second half with Kiernan and Eoin Keane (free) kicking over points to extend their side’s lead.

Granard tried to start a revival with Darren Gallagher kicking over two fine points and Paul Smyth firing over a free.

Pauric Gill kicked over an excellent point and then Petie Collum hit over a free to put eight between the sides in the 44th minute.

Granard tried to put passages of play together but the Gaels defended well.

David Hynes and Ian Small kicked over points for Granard but they were their last scores of the game.

They did have chances near the end but their shot selection let them down; going for goals instead of points.

Eoin Keane hit over a free in the 52nd minute and Paddy Collum made no mistake with a ‘45 to secure a fine win for the Gaels.

They live to fight another day. For Granard they have one last chance at survival.