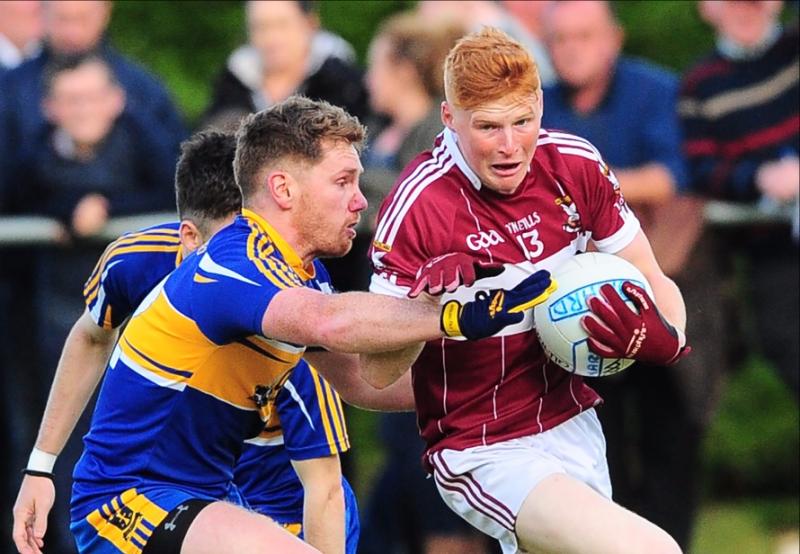 Jayson Matthews on the attack for Mullinalaghta but blocking his path is Dromard defender Paul McGee. Action from the Senior Football Championship Group 1 second round game. Photo: Declan Gilmore

Mullinalaghta are through to the quarter-finals of the Senior Football Championship but it was a close call in the Group 1 clash at McGee Park on Saturday evening last as Dromard made the Connolly Cup holders work very hard for the victory.

Just a solitary point separated the sides in the finish and Dromard were rather unfortunate not to snatch a draw deep into stoppage time as Ronan McEntire missed a couple of chances of getting the equalising point and Sean Hagan’s side now need a result against Slashers in the final group fixture to reach the last eight.

There was very little separating the sides in the first half with James McGivney firing over a couple of excellent points in driving St Columba’s on while Jamsie Martin figured prominently for Dromard with three scores (one free) to his credit.

McGivney went close with a goal attempt in the 11th minute, only to be denied by Dromard keeper Sean McNerney, while also on target for Mullinalaghta in the first half were Jayson Matthews (free), Gary Rogers (a cracking strike), John Keegan and Rian Brady.

The other Dromard points were registered by Francis McGee (two frees), Diarmuid Masterson and Ronan McEntire (free) and they led by the minimum of margins at the break, 0-7 to 0-6, thanks to a brace of points in stoppage time from Jamsie Martin (free and play).

Mullinalaghta were struggling to reproduce the same sort of impressive form that won them the county senior title last year but Mickey Graham’s charge made a great start to the second half with a goal from a penalty converted by Donal McElligott, awarded for a foul on his younger Aidan after James McGivney delivered a high ball into the square.

When David McGivney landed a free in the 40th minute to extend the advantage, St Columba’s appeared to be gaining control but Dromard were back on level terms moments later when Jamsie Martin pounced on the breaking ball to score an opportunist goal.

From there until the finish it was a tough and tense affair with the sides sharing a couple of points apiece.

The McGivney brothers James (play) and David (free) were on the mark for Mullinalaghta while Dromard replied with a free converted by Ronan McEntire along with a brilliantly struck sideline kick from Francis McGee in the 54th minute.

St Columba’s regained the lead with a point from a David McGivney free in the 59th minute and almost immediately John Keegan fisted the ball over the bar.

While Dromard had the better of the exchanges in the lengthy stoppage time after the game was held for an injury to Donal McElligott, the best they could do was a point from a Ronan McEntire free as they suffered a slender defeat.