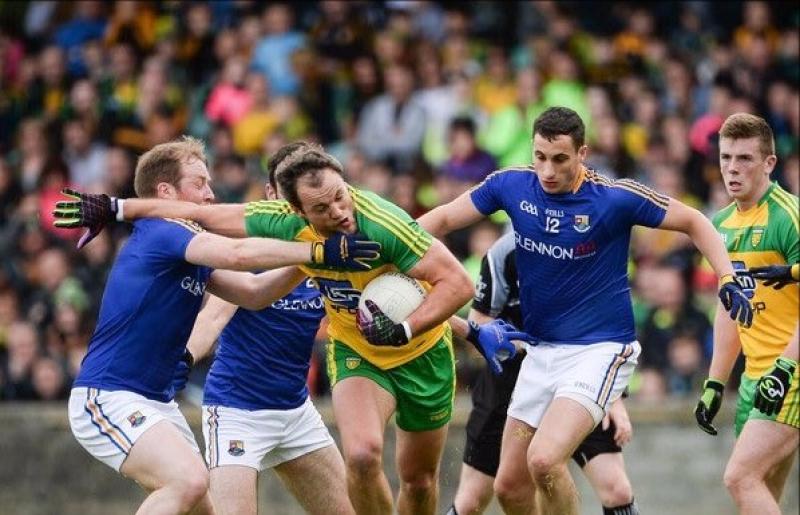 Donegal's Michael Murphy on the attack against Longford.

Five points separated the sides in Ballybofey this evening however the truth of the matter was that Denis Connerton’s Longford charges made Donegal work extremely hard for this 0-12 to 0-7 victory and put up a gallant display.

Longford, who defeated Louth in the previous round of the All-Ireland SFC qualifiers and were hoping to continue their qualifier giant killing exploits,  also had to play the closing twenty-five minutes with 14 players after James McGivney was sent off, after picking up a second yellow card.

The teams were deadlocked at 0-5 apiece at that stage and Donegal went on to outscore the visitors by 0-7 to 0-2 over the closing minutes.

Longford led by 0-4 to 0-3 at half time as both sides were focused on containment and it wasn’t easy viewing for the 9,915 attendance.

Donegal amassed ten opening half wides to Longford’s nine and it certainly wasn’t a contest for the purists. Indeed, by the final whistle, Longford’s wides tally reached 17, two more than the winners.

FT in Ballybofey. Donegal 0-12, Longford 0-07. Donegal pushed on and took control when Longford were reduced to 14 men. #TheToughest pic.twitter.com/HwYbLQSxk9

Longford showed their illustrious hosts little respect and they opened the scoring in the 3rd minute with a pointed free from Robbie Smyth. Michael Murphy levelled for Donegal with a well struck free from distance.

Longford’s forwards drew Donegal defenders into fouls and two further pointed frees from David McGivney gave them a two point lead, 0-3 to 0-1,  in the 21st minute.

Robbie Smyth very nearly caught Donegal’s keeper Mark Anthony McGinley out when he flicked the ball over his head but the ball bounced wide of the post.

The first point from play came in the 22nd minute through Paddy McBrearty. It was Donegal’s first score in 16 minutes.

Longford lost sweeper Daniel Mimnagh in the 25th minute through a black card after he hauled down Murphy.

Both sides then wasted scoring opportunities and the next point didn’t come until the 32nd minute; McGivney kicking over his third free of the game.

Right before the break Donegal got a much needed point through sub Martin McElhinney to leave them just trailing by one point; 0-4 to 0-3.

Despite restoring their two point advantage in the 37th minute Longford were dealt a blow minutes later when Darren Gallagher received a black card. They then kicked two wides in a row during a dominant spell.

Murphy (free) and McElhinney drew Donegal level at 0-5 apiece before Longford were reduced to 14 men in the 48th minute when James McGivney was shown a second yellow by Armagh referee Padraig Hughes.

With numerical advantage, Donegal began to get on top. They took the lead for the first time in the 49th minute and Diarmuid Masterson equalised with a top drawer strike, 0-6 all.

Donegal, however,  were three up by the 58th minute. They also decided to empty their bench and spring some of their big guns in the guise of Mark McHugh and Karl Lacey. The impressive McBrearty kept the scoreboard ticking over for Donegal with pointed frees, and Longford’s only riposte came from Robbie Smyth (free).

It wasn’t a vintage performance from Donegal, but it was a case of job done, and after losing to Tyrone in the Ulster semi-final,  they are now safely through to round 3 of the qualifiers.