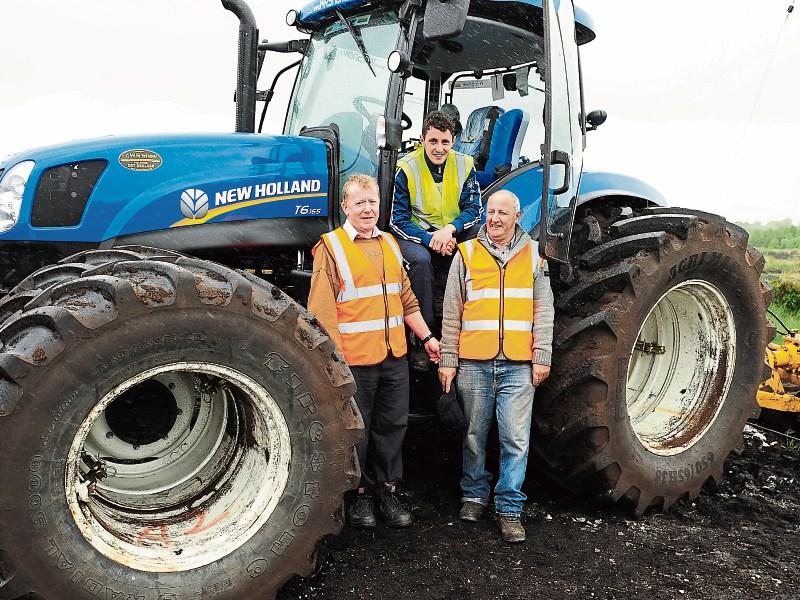 “I’ll be on my knees the whole match,” joked Andy Murtagh, who along with wife Breda, will watch their sons Brian, Ciaráin and Diarmuid strive to steer Roscommon to their first Connacht senior football championship title since 2010.

Standing between the Rossies and Nestor Cup glory are Galway, and team captain Ciaráin, is certainly not underestimating Kevin Walsh’s formidable charges who dethroned Mayo in the semi-final.

“This is my first major game against Galway at senior level. Down through the years they’ve given us a fair few clippings so hopefully we can just produce a good performance.”

Student teacher Ciaráin is undertaking seasonal work with Bord na Móna at Mountdillon and Area Leader Seán Casey was keen to highlight, “The last Bord na Móna man to captain a Roscommon team was Danny Murray, in 1980, and they got to the All-Ireland Final and we hope it can be repeated this year. The Murtaghs are fantastic ambassadors for football.”

Ciaráin enjoys the craic with the Mountdillon crew. “Sean Casey, Paul Riordan, Kevin Harte and all the workers are a great support to me.”

Andy is daring to dream. “I know that winning an All-Ireland is the ultimate. But to see Ciaráin lifting the cup, it would be a very very proud moment for our family and of course Roscommon supporters.”

Ciaráin credits Roscommon co-managers Kevin McStay and Fergal O’Donnell for ensuring the captaincy hasn’t become a burden.“Obviously it is a huge honour to lead the boys but I wouldn’t say there is any extra pressure.”

In an era where the sacrifices inter-county players make is under the spotlight, his attitude is refreshing. “Diarmuid and I started at U-14. Brian was always two years ahead and we would have seen what he was doing. It just comes natural. We don’t see it as a massive commitment. It is just something we always wanted to do. It is a dream come through. We are where we want to be.”

Just like the Murtagh brothers, the legendary Danny Murray was a St Faithleachs stalwart and on June 20, their club ground in Ballyleague throbbed with excitement as eager Rossie fans attended an ‘open’ training session.

“There were hundreds,” reflected Ciaráin, adding, “Our supporters have been great. When we played Cork and Kerry away in the NFL, they were nearly like home games - there were so many Roscommon people there. They’ll be there again on Sunday and it is a great help to have so much support.”

Andy, who is a Supervisor at Mountdillon, captained St Faithleach’s in the 1981 Roscommon SFC Final where they lost to a star studded Clann na nGael by 0-6 to 2-5. He reluctantly revealed that he ‘played a bit with the county’ and praised the club for how they’ve supported his sons.

“I know plenty of buses will be going down to Salthill from Ballyleague. The club has given great support. St Faithleach’s is very important to them. That’s where they grew up and a lot of great people were involved with coaching them down through the years.”

Brian, Ciaráin and Diarmuid were always sportsmad. In addition to their love of gaelic football and soccer, they boxed in the National Stadium and ran at the National Community Games Finals in Mosney.

“Our back garden was certainly hell of a place. There were some rows out there. And when they’d come in to eat the plates would be hopping off the table,” said their Dad.

He added, “I haven’t had a spot of bother with them since they were babies. I don’t think I have missed a match since they were five. And Breda the very same. She does all the hard work.”

The trio received their primary education at Ballyleague NS under the principalship of Annette Regan and their secondary education at Lanesboro Community College where Jimmy Flanagan was principal.

Ciaráin said there was always plenty of banter between the Rossie and Longford students, and remarkably, as fate would have it, both he and Diarmuid, made their NFL debuts against Longford in Pearse Park. And earlier this season, the Rossies were happy to call Pearse Park their  ‘home’ as they overcame Down in the NFL at the venue owing to issues with Hyde Park and Kiltoom.

Andy Murtagh also played with Longford VS footballers in 1972. “So the four us wore the Blue and Gold of Longford. Isn’t that funny,” he suggests.

Diarmuid and Ciaráin twice represented Longford in the Kennedy Cup and Brian went once. “Brian played on a team that also included Mickey Quinn and I think they got to the quarter-final,” added Andy.

Sunday’s provincial final is a major milestone for the Murtagh family but Ciaráin moves quickly to play down the hype. “It is great to have Diarmuid and Brian involved, and for the three of us, it is our first senior final to be in but it is a team game when it comes down to it.”

Galway defeated Roscommon by 2-8 to 0-13 in the FBD League Final earlier this year in Tuam and it is 38 years since Roscommon defeated Galway in a Connacht Final at Pearse Stadium.

“We knew that we were going to be away in the Connacht final and it is just something you have to get on with. It is a Connacht final no matter where you play it.”

Blitzed by Kerry (0-14 to 3-15) in the NFL semi-final at Croke Park in April, that result didn’t concern Ciaráin too much. “Our aim at the start of the year was to stay in Division 1 and we accomplished that.”

Ciaráin concluded, “We knew we had to go to NY and we hit a bit of a blip over there. It has been up and down since. We played well in the first half against Leitrim and not so well in the second half. It was vice versa in the Sligo game. We’ll be trying to get our form back that we had in the league and hopefully get a consistent performance for the 70 minutes. If we do, then anything could happen.”