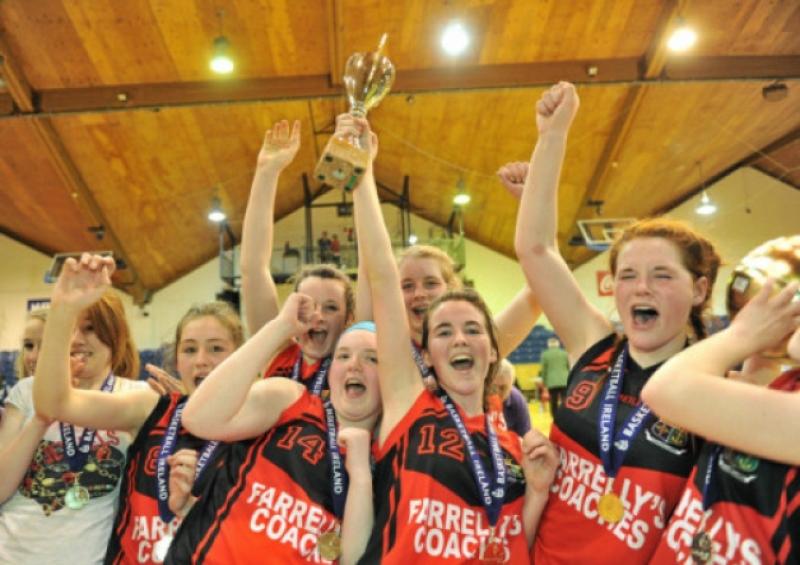 A dramatic U16 C Girls All Ireland Schools League final left both teams in an emotional state by conclusion with Mercy Secondary School from Ballymahon ecstatic, as dejected Colaiste Oiriall, Monaghan players dropped to the floor in tears.

The contrasting scenes, side-by-side, were somewhat predictable as neither side deserved to lose, with Mercy only truly gaining control of the lead late in the fourth quarter.

In the first period, Rachel Dillon kicked off the scoring for Mercy Ballymahon in a low-scoring but close first quarter that set the tone for all that followed.

The game opened up with over a minute to go in the period as Tracey Dillon scored from the field for Mercy. Oiriall captain Ellen Ni Bhriain followed this up quickly, scoring under the basket and bringing her team to within three points.

With both teams in foul trouble, Bhriain converted from the line closing the Mercy lead to two points at the end of the first quarter.

Mid-way through second quarter, Oiriall hit the lead for the first time courtesy of a lay up from Celine Ni Fhailigh.

The lead didn’t last long as Mercy captain Sarah O’Boyle converted from the field to level things up.

In the middle of the second quarter it was the captains who did all the scoring. This was until a jump-shot off the glass from Lynda Nic Giolla Mhichil put Oiriall in front by three points at the half time break.

With only two minutes gone in the third quarter, Oiriall had extended their lead to seven points. Before long, scoring duo Sarah O’Boyle and Rachel Dillon, had clawed this back and Mercy were within one point.

Throughout the period, both teams had trouble keeping their feet on the ground as the referees picked up several traveling violations, a sign perhaps of the growing nerves courtesy of a rocking atmosphere.

At the end of the third quarter, it was still close with Oiriall leading 26 to 23.

Rachel Dillon continued her scoring form for Mercy, with two baskets quick off the mark at the start of the final period. Mercy surged ahead and were up by four points with four minutes to go in the game.

The supporters were on their feet as Dillon increased this to six. Despite a late layup from Ellen Ni Bhriain, Oiriall couldn’t find their earlier form and Mercy Secondary College were League Final winners by 36 points to 30.

Mercy Secondary School’s Rachel Dillon ended up with 18 points for the game and was awarded MVP.