Carrickedmond driver moves up the gears 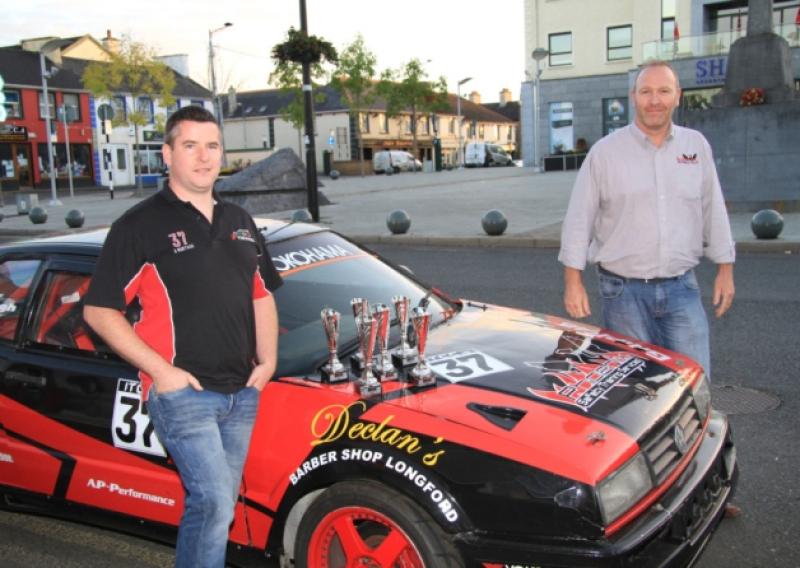 The past year was a remarkable one for 34-year-old Carrickedmond driver Anthony Murtagh as he won six trophies in the Irish Touring Car Championship (ITCC) however a coveted overall win eluded him.

The past year was a remarkable one for 34-year-old Carrickedmond driver Anthony Murtagh as he won six trophies in the Irish Touring Car Championship (ITCC) however a coveted overall win eluded him.

“I’m still hunting that overall win. Next year will bring that,” Anthony confidently predicted when he spoke to the ‘Leader’ recently.

Employed in communications with the Irish Air Corps, Anthony has competed in the ITCC, which comprises twelve races held over six weekends, since its inaugural year of 2010 and in 2011 he managed to finish third in the championship.

This year, twenty-one drivers registered for the championship, eleven in Super Touring and ten in the Touring Class, and of the ten competing in Anthony’s class he finished fourth overall.

He remarked, “Although the competition is tough, this was my most successful year in regard to trophies earned, six over five weekends for three 3rd place finishes and three 2nd place finishes.”

Anthony’s achievements are all the more commendable considering he failed to finish two races due to mechanical issues and he missed the first event of the season, which runs between St Patrick’s weekend and September, as he was “financially embarrassed” after rebuilding his Volkswagen Corrado car.

He took up the story, “I originally built the VW Corrado for track days in 2008 but when the ITCC started in 2010 I knew I just had to give it a go. After four years of hard racing the shell was looking very tired from a lot of hard hits so over last winter I undertook the challenge of a full reshell.

“This consisted of buying a bare Corrado shell and preparing it for a roll cage. A full weld in Roll Cage was fitted by Gripfab in Kilkenny - truly a work of art more than a safety device. I started the build out the back of my house on Christmas week during the holidays and finally finished it on St Patrick’s weekend. Unfortunately I didn’t get to compete in the opening rounds of ITCC due to no funds left after the build.”

Anthony didn’t wish to reveal the cost of the rebuild but admitted the outlay was worth it as the VW Corrado is ‘stronger and better than ever’.

“There is more power, of around 140bhp and the better gearbox meant faster lap times were punched in this year.” The car will undergo a full engine rebuild at Gripfab this winter.

Son of Dan and Ann Murtagh, Anthony, who was educated at Colehill National School and Ballymahon Vocational School, outlined that he has ‘got the hardest working guardian angel anybody could ask for’ on his side.

“I’m blessed to report that with all the incidents and crashes I’ve been in I’ve never sustained any serious injuries. That’s mainly down to the strength of the German engineering and the quality of all the safety equipment in a competition car.”

Explaining that he spent his ‘fair share of time in the kitty litter’ (run-off area), Anthony said the most dramatic incident he was involved in came back in 2012.

“I crashed while driving at 100mph in Mondello. The car was a wreck but with the helpful hands of good friends Anthony Kellaghan and John Staunton from Killucan the car was rebuilt and was out competing for the next round three weeks later.”

While he receives help and support from friends and family, competing is a solo operation and Anthony makes many sacrifices to fuel his passion for ITCC.

“Running a car can be very expensive so a lot has to be sacrificed. I try to fund as much of the season myself on a shoestring budget. I don’t go out with mates as much as I’d like to and can’t remember the last time I actually bought new clothes. Even buying food on race week can be a challenge.

“But I am very fortunate to have received financial backing from two Longford based companies, Declan Donohoe from Declan’s Barber Shop and Paddy & Gillian McDonnell from Phoenix STS. Their support has helped funding costs such as tyres and essential repair work throughout the season.”

The youngest of a family of four - brother Daniel and sisters Sharon and Gillian - Anthony became ‘hooked’ on rally driving when he was treated to a passenger lap on a track day in a 400bhp Nissan Skyline at Mondello Park in 2007. He also credited the influence of John Staunton from JOMO Engineering on shaping his career.

Anthony was the only Longford driver in the ITCC this season, however, in 2012 he was joined by Keith Campbell from Carrickboy.

He said motorsport is a fast-growing sport in this country. “Every year is getting bigger and better, Mondello Park has recently added Mondello TV (www.mondello.tv) so all races are streamed live. It is pretty interesting with viewers from around the world logging in to watch. I’m assuming its the Irish abroad gang in America & Australia and various other corners of the globe.”

For more information on ITCC check out www.itcc.ie.