Excitement building ahead of Longford’s ‘Brawl in the Hall’ event 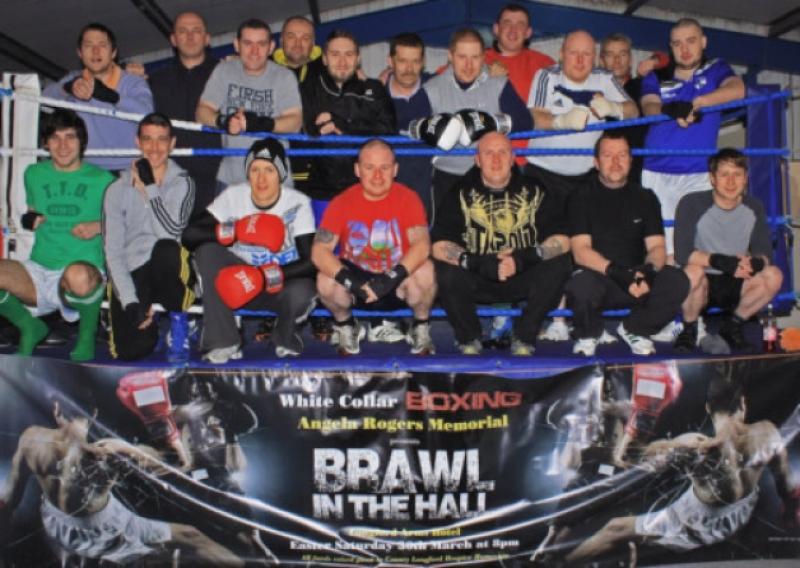 There is no disputing the rising popularity of white collar boxing as a fundraising event and one of the most eagerly anticipated white collar events takes place on Easter Saturday night when the Longford Arms Hotel will host the ‘Brawl in the Hall.’

There is no disputing the rising popularity of white collar boxing as a fundraising event and one of the most eagerly anticipated white collar events takes place on Easter Saturday night when the Longford Arms Hotel will host the ‘Brawl in the Hall.’

Brawl in the Hall is a white collar boxing event in memory of the late Angela Rogers, late of Harbour Row, Longford town, who passed away on April ’12, last year. Family and friends have come together to organise the fundraiser in her memory and to give something back to the Hospice.

One of the organisers is her son, Noelie, who told the Leader: “Few of us do not know either a neighbour, friend, or close family member who has not been affected by a terminal illness and know the marvellous work that the Longford Hospice do.”

As the family sought to come to terms with the passing of a much loved mother and a greatly respected member of the community, it was decided to run an event in Angela Rogers’ name and thereby give something back to the Hospice. A small committee was formed and they held their first meeting in early December. Along with Noelie, the other committee members are Ann Toher, Mary McGarry, Katherina Hughes, Aoife Byrne and Katie Rogers.

Brawl in the Hall takes place in the Longford Arms Hotel on Easter Saturday night at 8pm. There is a total of ten fights on the night with boxers from Longford town and county taking part. The MC on the night is John Lynch, Sports Editor, Shannonside Northern Sound Radio. Also there will be an exhibition of Mu Thai Kick boxing during proceedings on the night. Admission on the night is €10.

This week Noelie Rogers told the Leader that he wanted to thank the boxers for their hard work and dedication. He went on to thank Johnny Killane of Midlands Matsubayashi for the use of their premises and also to Harry and Johnny McKenna from Connolly Boxing Club for their training and time which was so generously given. There was also a mention for Sean Luckie, and his fitness training. ”.

Noelie went on to thank all the sponsors who have really come out in support of the event. He told the Leader: “It feels that we have knocked on every door in Longford Town over the past number of weeks and we would like to thank all our sponsors who gave to the Brawl in the Hall in this very tough economic time.”

The boxers are now entering their final week of preparations for the big fight night and tickets for the event are selling well and can be purchased at the Longford Arms or direct from Noelie Rogers or family members and friends.

Meanwhile if you won’t be able to make it on the night but would like to donate to the Angela Rogers Memorial Longford Hospice Fund, a bank account has been opened at AIB, Longford and the details are: Sort code - 93-21-40 and account number is 20744038.

You can follow the boxers progress and for the latest news on the event on facebook at www.facebook.com/brawlinthehallrogers