Bowled over in Ardagh 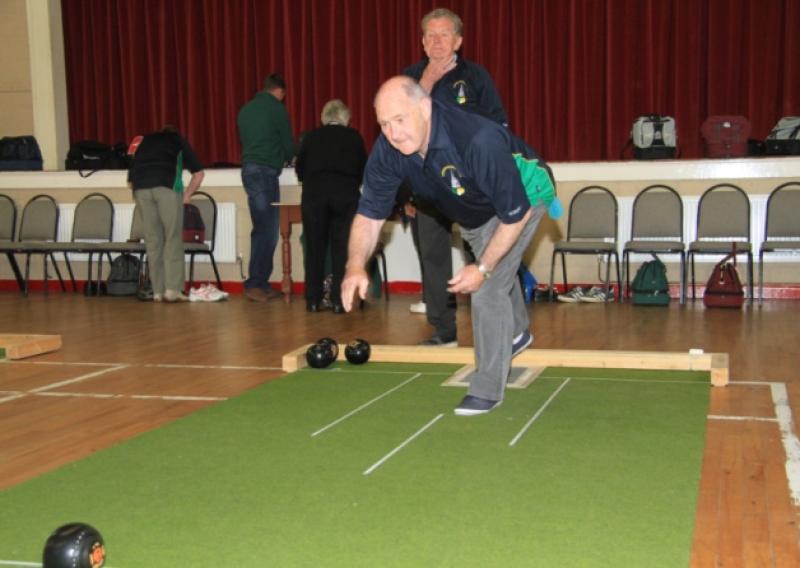 Most people know very little about bowls but the sport is growing in popularity right across Ireland as more people get hooked on this intriguing game of skill.

Most people know very little about bowls but the sport is growing in popularity right across Ireland as more people get hooked on this intriguing game of skill.

Ardagh Bowls Club is Longford’s only bowls club but it was a hive of activity when the Leader caught up with its members at the local community centre last week.

Members from Streete Bowls club were there and a match between both clubs was reaching fever pitch when Dean Victory, Martin Farrell and Liam Connaughton took time out to chat about bowls and its growing popularity in Ireland.

“It all started here through the Active Age,” a delighted Mr Farrell told the Leader.

“We got grants and we bought a couple of mats, then we bought the bowls and it all started off from there really.”

Ardagh Bowls Club began in that very humble fashion back in 2010 and has quite simply gone from strength to strength in the intervening years.

“There are not that many clubs in Longford, so we joined with Westmeath and began participating in leagues,” continued Mr Farrell.

“In fact we were the only Longford team in that, and in our first year we won the Division 2 League.”

These days,the club boasts a team in Division 1 as well as Division 2.

“We train on Thursday nights and we would have a club game on Wednesday and Friday nights, so we are all kept going I can tell you,” Mr Farrell explained.

“In our club here we have people from Ardagh, Legan and Longford town and it’s great fun. “The competitive edge is there too, so that keeps us all on our toes,” he laughed.

Apparently the sport is very popular in Northern Ireland and has been garnering more and more attention in the Republic in recent years.

There are no limits on age when it comes to bowls and in fact there are people of all ages involved in the Ardagh club. Its oldest member is 82 while the youngest, at the moment, is 32.

Dean Victory is the secretary of Ardagh Bowls Club and has been there from the beginning.

“It is open to men and women, and indeed to people of all ages - that is one of the wonderful things about bowls, and it brings people in the community together as well,” Mr Victory said, before adding that those who played football in their younger days were very attracted to bowls because of its competitive edge.

“There is a great social aspect to it as well. We would play other clubs both at home and in away games, and then we have our presentation nights in the Greville Arms Hotel in Mullingar, which is our main sponsor.”

There are currently seven bowls clubs in Co Westmeath, compared to just one or two in Longford.

There is an interest in Longford, according to members, who pinpointed Dromard, Drumlish and Kenagh as potentials.

“It’s more of a winter sport to tell you the truth,” Mr Victory continued.

“We have a well established club here now and that is great to see. It’s going well for us, but we would like to see more clubs in Longford and we would help them along.

“We have about 24 members here and there are a few casual players as well, but we are always looking for new members and everyone is welcome.”

“In Westmeath we have seven clubs,” he proudly added.

“Bowls is very strong in north Westmeath at the moment and we are hoping to develop it in Longford as well.

“We coached a few members in Longford town - what we would really love to see happening is that enough clubs could be established so we could run a Longford/Westmeath League - now that would be competitive,” laughed Mr Connaughton.

Bowls clubs have plenty of competitions throughout the year to keep members on their toes.

The leagues are very popular and there are also a number of cup competitions. Members can play in singles, pairs, trips or rinks and for at least five months of the year the competitions are in full swing.

“We started from nothing and now we have a number of clubs - so it is all good,” Mr Connaughton added.

“We want to see more clubs in Longford so we would be asking people who are interested to come and talk to us - then we can start coaching.”