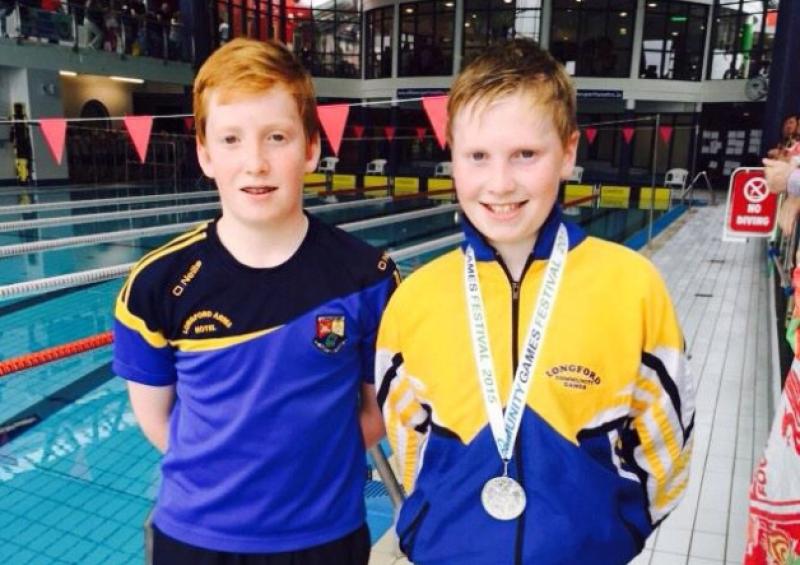 Dúileach Ryan (Lanesboro) and Tomas Scanlon (Abbeylara/Mullinalaghta) splashed their way to swimming medals at the Regional Sports Centre in AIT on Saturday.

Dúileach Ryan (Lanesboro) and Tomas Scanlon (Abbeylara/Mullinalaghta) splashed their way to swimming medals at the Regional Sports Centre in AIT on Saturday.

Competing in the U-12 Backstroke event, determined Dúileach, swimming from Lane 5 sealed second place and a silver medal, being pipped for gold by Mayo’s Conn McNamara.

It was a superb swim by Dúileach and there was almost a Ryan family double as his older brother Séadhna reached the U-14 Freestyle final only to miss out on a place among the medals by a fingertip touch.

Tomas Scanlon won his semi-final in the U-8 Freestyle Plate and from Lane 4 in the final, the talented young swimmer earned a medal for his 4th place finish with the top three positions being occupied by swimmers from Sligo, Dublin and Leitrim.

David Mills (Carrickedmond) won his semi-final in the U-14 Breaststroke but missed out on a medal in the final, while Harry Stewart (Carrickedmond) also progressed to the U-16 Freestyle final.

Meanwhile, on Sunday, it was the turn of Longford’s girl swimmers to compete in the AIT pool and the highlight was the performance of Aisling Scanlon (Abbeylara/Mullinalaghta) as she claimed silver in the U-10 Backstroke, finishing marginally behind Kate Delaney (Louth) and ahead of Alannah McGahon (Monaghan) and Ellen Blake (Clare).

Aisling’s brother Tomas won a 4th place medal the previous day making it a particularly special weekend for the family.

Aine McWeeney can be rightly satisfied with her fifth place finish in the U-14 Butterfly Final and her Clonguish colleague Shauna Nolan also progressed and competed well in the U-8 Freestyle final.

Other swimmers that represented Longford over the weekend were;