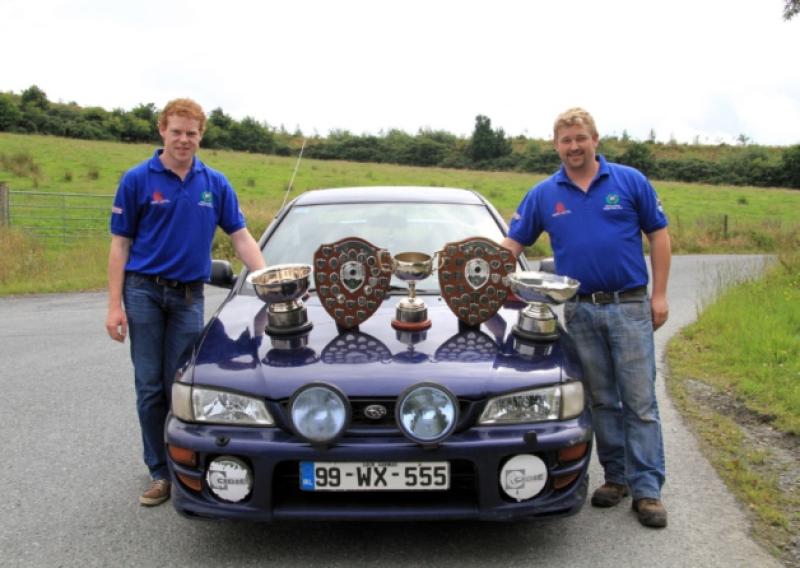 Night Navigation involves a predetermined course plotted on a map and Drumlish native Colin describes it as “the most adrenaline filled treasure hunt you will ever do.”

For many years Colin and Sam endured the agony of missing out on National Championship glory, however, this year they emphatically consigned that disappointment to the history books by capturing the National, Border and Munster Night Navigation Championships.

Colin honed his skills at an early age thanks to his father Packie, who was also a leading figure in rallying and night navigation trials, and he quipped, “This is a major achievement for myself and Sam.”

Finishing third overall at the Cork Startrec Championship last November got Colin and Sam’s campaign off on a solid footing and when they secured victory at the daunting Monaghan Drumlin trial, part of the Border Championship, the following weekend they knew they were on the scent of achieving something special.

“It was the first time in seven years a Monaghan crew didn’t take the spoils,” reflected Sam.

At the 1000 Shakes event in Cork early in the New Year, Colin and Sam recorded another significant first overall, setting down a strong marker in the race for the Munster and National Championship titles. The next round in Donegal wasn’t as fruitful and ended with a 4th place finish. Colin explained, “We’d serious car trouble and were lucky to finish.”

They were second at the 100 Isles in Skibbereen and victory at their ‘home’ MMC event meant the Munster Championship crown was safely in the bag and they swiftly turned their attention to a possible clean sweep.

A burst radiator meant they failed to finish in Cavan but this didn’t dent their confidence and another victory in the Monaghan cauldron saw them add the Border and National Championship silverware to their bulging trophy cabinet.

Sam recalled, “We knew heading up to Monaghan a top ten finish would be enough to see us lifting the two titles. We planned to take it easy but we won outright claiming 1st overall in both championships. It was a fairytale event. Colin’s driving was a credit and the car held up perfectly.”

Colin expressed thanks to their families for their support. “Without the backing of our families we would not be privileged to compete. A special thanks must go to my father, Packie and Sam’s father, Derek and wife Deirdre together with extended members of our families.”

Sam added, “It’s hard leaving young children at home at the weekend and I would like to thank my wife Deirdre for being so understanding. We feel very lucky.”

When asked if they intend to defend their triple crown, Colin replied, “At the minute it is a no but stranger things have happened!”