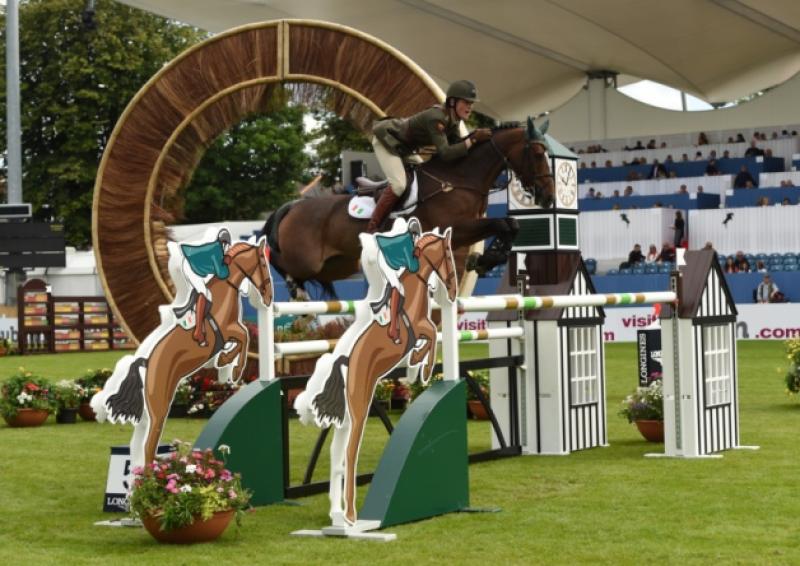 Ireland’s triumph in the Aga Khan Nations Cup on Friday was the undoubted highlight of the show.

And Granard equestrian legend Eddie Macken, who represented Ireland 27 times in the Nations Cup, was among those cheering the Irish onto success. He is now based in Vancouver, Canada, as a trainer.

On board ‘Drumiller Lough’, Captain Kelly finished fifth in The Speed Stakes in a time of 56.62 on Wednesday. Greg Broderick (54.74) and Darragh Kenny (54.78), members of Ireland’s victorious Aga Khan Cup winning team, occupied the first and second places, respectively.

Also on Wednesday, the Carrickedmond native secured 11th and 12th place finishes in the Irish Sports Council Classic with ‘Ringwood Glen’ and The International 7 & 8 Year Olds (1st Round) with ‘Dunganstown Boy’, respectively.

In Thursday’s Serpentine Speed Stakes, Capt Kelly was 9th with ‘Ringwood Glen’ in a time of 75.11.

While later that day, Capt Kelly teamed up with ‘Drumiller Lough’ to take 11th spot in The Anglesea Stakes in 79.01.

‘Ringwood Glen’ and Capt Kelly were 12th in the Longines International Grand Prix of Ireland on Sunday in a time of 81.10 (& 4 faults).

In the International 7 & 8 Year Olds 2nd Round on Friday and Final on Sunday with ‘Dunganstown Boy’, he achieved finishes of 21st and 18th, respectively. While in Saturday’s The Accumulator, Capt Kelly and ‘Drumiller Lough’ were 26th.

On Saturday evening, Capt Kelly, a Leinster minor football championship medal with Longford in 2002, took a short break from the showjumping and ventured across to Croke Park for the All-Ireland SFC quarter-finals where Tyrone and Mayo dumped Monaghan and Donegal out of the race for the Sam Maguire Cup.

Meanwhile, in the Hunt Chase on Sunday for the Thady Ryan Perpetual Challenge Trophy, the Longford Harriers quartet of Paddy Berry, Siobhan Connell, Louise Cassidy and Liam Dillon displayed cool heads on the big stage and finished in the final eight.

Longford Harriers, lauded the ‘amazing performance’ of their team. “Paddy, Siobhan, Louise, Liam and Chef D’equipe Declan Murray, you did us proud and thanks for such wonderful commitment. What an achievement to finish in the final eight in Ireland. Thanks also to the large numbers who travelled to support the team,your cheers were appreciated. All in all a super week, finished off with a thrilling hunt chase competition.”

It was also a great week at the RDS for Longford Pony Club, as four of their six young competitors won rosettes.