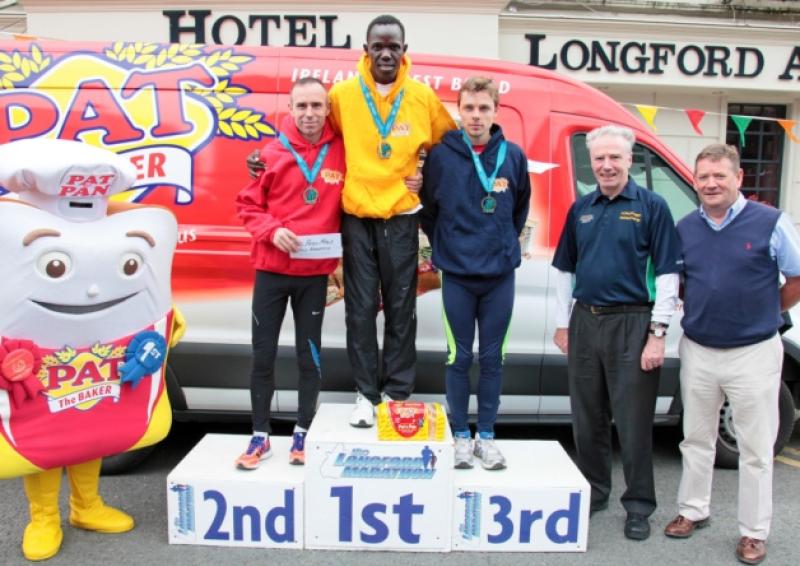 The 13th annual Pat the Baker Longford Marathon got off to a flying start with competitors participating in 63.42, 42.25 and 21.15 kilometre distances for the ultra, full and half marathons respectively.

The 13th annual Pat the Baker Longford Marathon got off to a flying start with competitors participating in 63.42, 42.25 and 21.15 kilometre distances for the ultra, full and half marathons respectively.

Over 800 runners and walkers took part in the events which covered ground from Longford town, Killashee, Tarmonbarry, Rooskey and Newtownforbes.

The event is receiving international acclaim as enthusiasts worldwide came to town to take part. Not only that but local entries are also up and with entries up by 10 per cent since last year, it is growing all the time.

“We’re globally recognised,” said organiser Fiona Fenelon, continuing, “We are part of the Association of International Marathons and Distance Races so we get a lot of overseas people.

“There were runners from the Netherlands, Sweden, England, America, Australia, Hong Kong, South Africa and the marathon winner was Kenyan.”

Fiona highlighted the many participants who had different stories to tell, with a variety of reasons to take part. “Six policemen from California were running for charity, they are running a marathon in every continent and chose Longford for Europe.

“A couple came from Longford, Tazmania to take part. They based their holiday around this marathon; they will now stay in Ireland for two weeks and then travel Europe.

“Siobhan McHugh, daughter of Jim McHugh from Aghadeignan came home from China after 10 years to do her first Irish full marathon and finished in forth place with a brilliant time of 3.49.41.

There were plenty of local achievements, with people achieving personal bests and other personal milestones. This year was an extra special one for locals as the John Martin Memorial award for the first Longford person home was presented for the first time. This year it went to John O’Hanlon from Ballymahon, who finished in 2.59.29. Presented by Betty Martin in the Tally Ho at the post-race party, the trophy will be a yearly award.

Fiona concluded by emphasising the importance of the event to Longford and how they hope to develop the idea of an annual running festival featuring a variety of attractions, with the marathon being the focal point.

“We want to grow this event more and continue to grow. We are looking at having more things going on, like things for children throughout the weekend to make it a family occasion and the marathon being the main event.”

First home from the ultra marathon was Brian Geraghty in a time of 05:07:02. The marathon wheelchair winner was Jerry Forde who was home in 05:19:17, while the first marathon walker, Humphrey Moynihan, finished in a time of 04:19:12.

Everyone who took part received a medal and a race goodie bag.