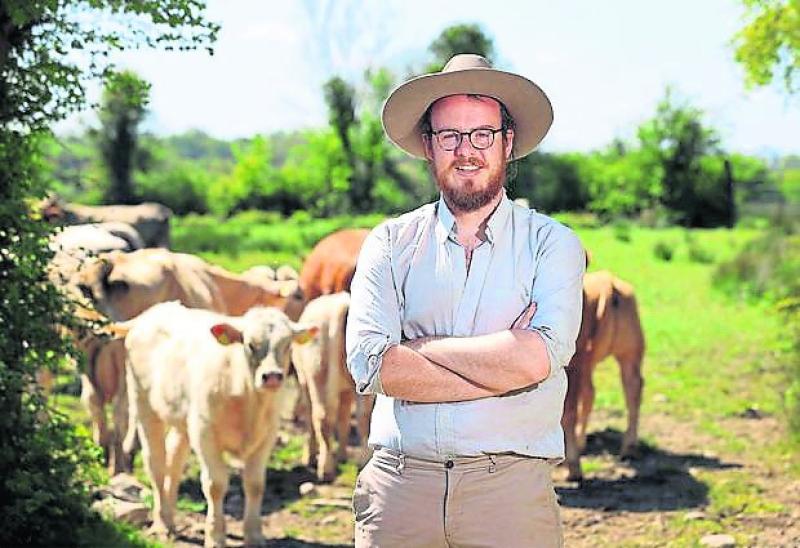 “What is the personality of Longford? We are a friendly and welcoming county, whose people love a good laugh. We are open and curious people, who want to get to know you and your story”.

My ‘Travel Tales with Fergal Podcast’ guest this week is the Longford author John Connell who has written a trilogy of autobiographical books which are three love letters to his home county of Longford.

Connell published the critical and commercial bestseller The Cow Book in 2018 which was a memoir of his return to his family's farm in Longford after many years in Australia and Canada. Then he wrote The Running Book about his love of running but also the rich colonial history of Longford.

Both books struck a chord with Irish and international audiences because John eloquently wrote about rural Irish life in the 21st century updating a tradition in Irish writing of documenting the lives of rural people like the writer Thomas O’Crohan, who wrote “The Islandman”.

Now he has written The Stream of Everything which is about a canoe trip down the Camlin river in Longford over two days with his friend, the journalist Peter Geoghegan. The trip took place during the summer of 2020 during the pandemic, when we were limited where we could travel, and we learned to appreciate our local areas.

John talks about how the pandemic gave time for thoughts and actions that we didn’t notice before. He talks about going for quiet walks on a local road and hearing the sound of bees properly for the first time through the silence.

“After nearly dying in Sydney harbour ten years ago, I made a promise that I would sail down the Camlin in a thank you for bringing me home but that trip nearly never occurred,” said John.

The Stream of Everything is a celebration of the simple beauty of nature that we are surrounded by but often fail to fully appreciate. The book is a meditation on the beauty of the scenery along our rivers from the flora and fauna, from the swans and herons to the otters and fish in the waters. “We saw a world that has continued on as it has done for thousands of years”.

“Longford, our home, has faced challenges in recent years but being on that river, I can see now that the river is a place of inspiration. That the river can be part of the new song of Longford,” said John.

“Longford is a small place, but it has been a pivotal place in Irish history from the Elizabethan conquest when Longford was at the edge of the British empire to the ending of 1978 to Michael Collins in the War of Independence. We have standing stones older than the Egyptian pyramids and a 6th century monastery on Lough Awna Island, which was set up by St Colmcille and ransacked by the Vikings, who once had 100 longships on Lough Ree in Longford.”

I would highly recommend the Stream of Everything for anyone who loves to walk on the Suir blueway. The book is an appreciation of our waterways and shares great insights into all the life teeming by those rivers like the simple mayfly, who lives for one glorious day on the river.

Especially if you consider going off the beaten path to counties like Longford, where holiday accommodation, food and activities can be more reasonably priced. Longford is part of the Hidden Heartland and it has stunning scenery and lakes like Lough Ree.

I am lucky enough to have a friend who has a house on Lough Ree and he says the best sunsets in the world are over that lake in Longford.

My friend is from New Zealand and after searching all over Ireland for a summer house he chose Lough Ree, near Landsboro, because it most reminded him of the famous Marlborough sounds region in New Zealand. It is a truly beautiful part of Ireland waiting to be discovered by many Irish people.

Longford recently made national attention in the tourism industry when Center Parcs set up Ireland’s largest tourist attraction with over 100 activities on offer for up to 2,500 guests in luxurious guest lodges on-site at Newcastle woods.

But there are many more attractions and activities in the county for tourists including the Royal Canal Greenway from Clondra to Dublin, which is the longest linear greenway in Ireland. The National Famine Way from Strokestown is also a great trail in Longford for walkers.

For history buffs there is the Corlea Trackway Visitors Centre in Kenagh which is home to an ancient trackway/Iron Age bog road which dates back to 148BC. Then there is also the Knights and Conquests Heritage Centre in Granard which is a Norman Ireland interactive visitors centre adjacent to Ireland’s tallest motte. For information go to www.longford.ie

John Connell’s Longford trilogy shines a light on rural Ireland and its people and shows us the magic of the landscapes and the richness of the history all around us and as he says himself the special welcome everyone will get when visiting his home county of Longford.

To listen to John’s Travel Tales with Fergal Podcast go to www.traveltaleswithfergal.ie.

* For all sports lovers I have a 10 episode GAA Minor Moments Podcast, brought to you by Electric Ireland, out now on all podcast platforms. It is an interview series where well known Irish stars sharing memories from their sporting career with some of the biggest names in Irish sport including Colin O’Riordan, Brian Whelahan, Jamesie O'Connor, Eamon O'Shea, Niall Quinn, Danny O'Brien and Mick Galwey to name just a few.