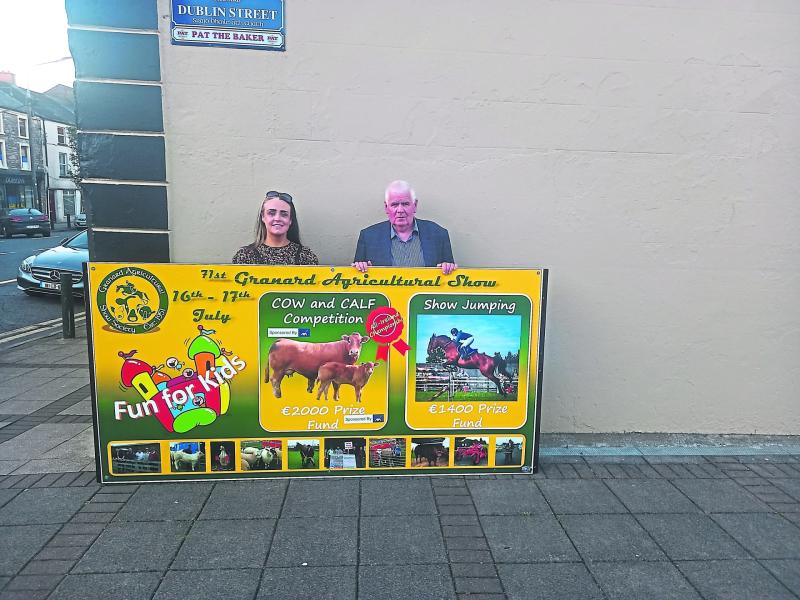 Meet two of the key protagonists behind the incredible success of this year’s Granard Agricultural Show.

Hazel McVeigh and PJ Reilly in their respective roles of secretary and President both spoke of their enthusiasm this week at the long awaited return of the town’s annual show day.

Hazel spoke of how thousands of euro in prizemoney would be up for grabs, buoyed by a coup committee senior figureheads believe could ultimately transform the show and all it encompasses for the better.

“We have huge classes in the cattle section and our biggest class is our All Ireland cow and calf championship which is kindly sponsored by Axa Insurance,” said Hazel.

“We were lucky enough in 2019 when it was brought to the table at an ISA meeting that if any show was willing to take on this class it could put their show on the map and we shouted for Granard to take it.”

The added bonus of being able to entice such a high profile name as Axa only added to that cause backed up by a plethora of locally based firms.

“There has been a lot of preparations and we are very grateful to all the people who have come on board to sponsor, let it be big or small, it makes no difference,” she added, name-dropping Paul Belton of Midland Agri who is sponsoring the Champion of Champions cattle section.

“When you go to somebody’s door and they offer you sponsorship, that’s brilliant in the times we are in. It’s hard for businesses, they are trying to get back on their feet after Covid and we haven’t been refused anywhere.

“The support Granard Show has got when out looking for sponsorship has been amazing so we would like to thank all our sponsors because without them we wouldn’t have a show and the show wouldn’t be in existence.”

The last time Granard saw a show the size of this weekend’s was three years ago, something organisers put down as “unprecedented”.

But with public health restrictions very much a facet of the past, there is a discerning belief among organisers that this year’s equivalent could yet top that.

“People like sponsoring the show, it’s one of the old traditions here in town and it is a day out for families,” said Cllr Reilly.

“Back over the years in the 60s and 70s it used to be run on a Thursday and all the schools in the neighbouring perishes would all close for the day to allow families to go and experience the show.

“People want to see the Granard Show back, they want to be able to attend it, support it and all we are focused on now is making sure everyone has a good day.”