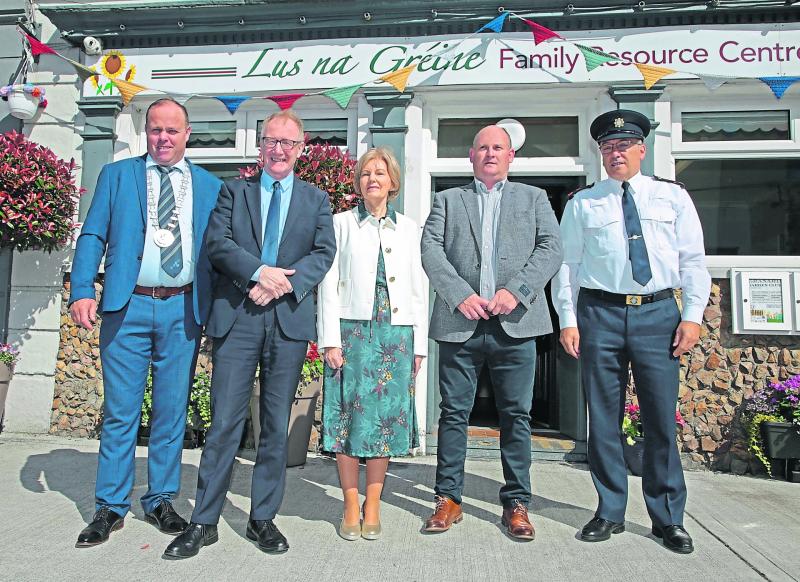 Minister of State for Public Health and Well Being Frank Feighan was in Granard on Monday after Healthy Ireland funding was allocated to one of north Longford's most “vital services”.

The Sligo-Leitrim TD took in a tour of Lus na Gréine Family Resource Centre in Granard to see at first hand some of the many initiatives management and volunteers have rolled out to members of the local community in recent months.

A large and attentive audience awaited the Fine Gael minister who was greeted by Thomas Pettit, chairperson of the board of management and the centre's project co-ordinator Eileen Finan.

She told of how the centre which was Ireland's 100th such facility to be set up by the late Fianna Fáil minister Seamus Brennan in 2008 has grown steadily in prominence owing to an ever increasing need among the wider north Longford public.

“Volunteers are so vital and many of them are gathered from within our community and we have a thriving board here who do huge work in having a vision for the well being of this community,” she said.

The investment, she added, was hugely significant in terms of meeting the many challenges resource centres like Lus na Gréine face on a daily and weekly basis.

“That need has always been evident in every community but it has grown and grown over the years and has been exaggerated by the pandemic certainly and by lots of different societal issues that arrive from time to time,” she said.

Minister Feighan followed those remarks up by singling out the unstinting efforts of Ms Finan and a modest, but innately dedicated band of volunteers.

“It is lovely to see all the brainwork that has gone into a centre like this,” he said.

“I am fortunate to see at first hand by travelling around the country to see what my department along with other departments are providing for.

“If you don’t have the volunteers and people like Eileen and users all working together in a collective manner then you don’t have projects that will get funding.”

Granard Municipal District Cathaoirleach Cllr Paraic Brady was just as enthused, saying the monies ringfenced would bring untold benefits to Granard and many of its neighbouring towns over the weeks and months ahead.

“It’s a huge investment not only for the minister to attend here today and see the crowd of people but also to see the great work the family resource centre does not only in well being but in Health Eating and by way of a number of initiatives that are on display here.”