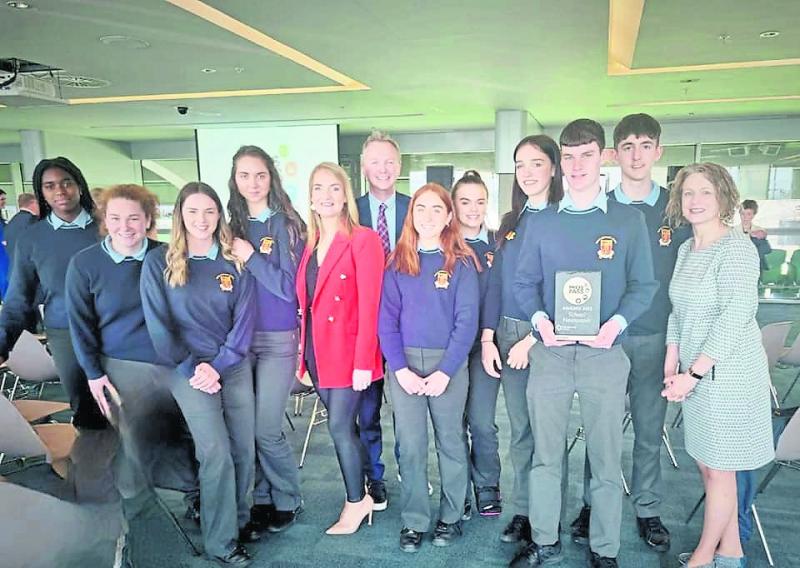 Moyne Community School TY’s were the awarding recipients recently of the third prize award in the school newspaper category.

This was an outstanding achievement considering more than 10,000 transition year students took part in the annual NewsBrands Ireland Press Pass initiative in this academic year, with 19 prizes awarded to recognise their original journalism.

‘The Paper’ created by 45 Moyne TY students in collaboration with their teacher Ms Mc Entire was an initiative undertaken as part of their English course.

Each of the three TY classes took on the task as part of their nine-week English module.

The first class identified a suitable, yet, original name for the school newspaper while developing an online WordPress.

They then set out researching, identifying and examining suitable, relevant and interesting content.

The TY classes in module two and three continued to identify further relevant & topical content while editing and uploading material.

The Press Pass competition was launched 10 years ago and seeks to teach the fundamentals of journalism writing, improve news literacy and critical thinking skills, and encourage TY students to analyse content and form opinions about important social issues.

The winners of the NewsBrands Ireland Press Pass student journalism competition were announced on the 10th May at an awards ceremony in the Aviva Stadium with prizes awarded in six categories including News Writing, Features, Opinion, Sports Journalism, Photojournalism, and best School Newspaper.

The event, which was hosted by Matt Cooper (Today FM), was attended by the award-winning school students, their teachers, and families, along with national newspaper editors and journalists. A panel discussion regarding media literacy and the role of journalism in society and education took place with Sunday Independent Editor, Alan English, Irish Examiner Deputy Political Editor Elaine Loughlin, and English Secondary School Teacher Mary Lowry.

Speaking at the awards ceremony, Minister for Media Catherine Martin said it was really “uplifting” to see the impact the programme has had on so many young people.

“I have nothing but admiration for the work you have all put into the programme. The subject matters you have chosen to focus on are diverse, interesting and topical,” she said.

“In the area of disinformation, we must foster the development of the skills necessary to interrogate and to deal with the constant and sometimes overwhelming volume of information that we are faced with on a daily basis.” She added: “I’m absolutely confident that your generation will be one of innovation and trendsetters.”

Colm O’Reilly, chairman of Newsbrands Ireland, said the aim of the awards was to encourage the next generation of journalists. “We want to foster a love and curiosity of current affairs. The most important thing for me is newspapers are the genesis of the ecosystem of news. They are the key to the thing you see so often in other media,” he said.

“News stories have the ability to change society for the better. They change laws, they connect communities and they call the truth to power.”

The winners were selected by a panel of editors and journalists, chaired by Michael Foley, professor emeritus of journalism at Technological University Dublin.

Speaking about the awards, Mr Foley said, “Press Pass is an important news literacy project where students are introduced to journalism, its place in democracy, about truth and accuracy, about sources, about misinformation and how to spot it, what is ethical journalism, the public interest and why journalism matters.”