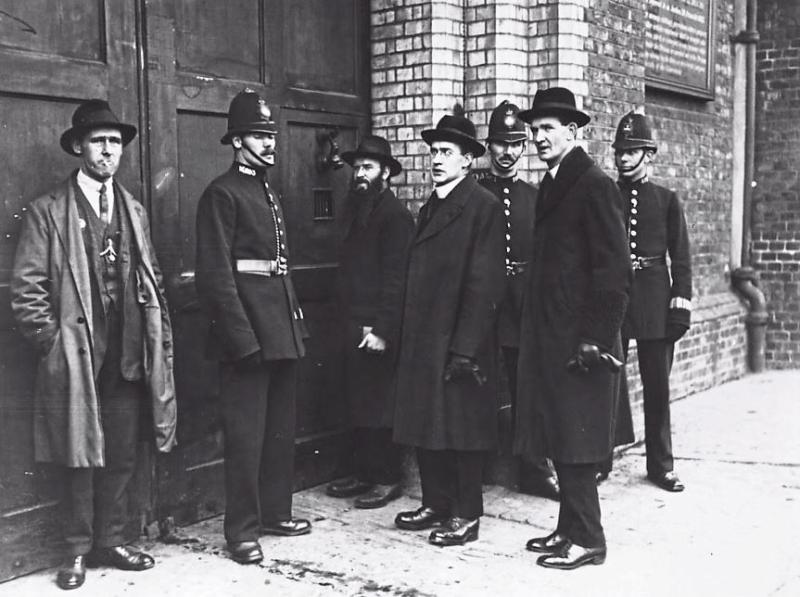 Fr Pat Mac Cormaic (second from right), a native of Mullinalaghta, pictured outside Brixton Prison on his way to the inquest into the death of Terence MacSwiney in 1920

Given the multitude of Longford men and women who lived and worked in London, it is not surprising that many of them played a part in Republican activity in their adopted city.

It is ironic indeed that the most active Longford man in London during the War of Independence was Sir Henry Wilson, Chief of the Imperial General Staff, in other words, the top man in the British Army.

A more extreme anti-Irish man would be hard to find, at a time when Ireland was bleeding from the atrocities of the Black and Tans. Henry Wilson was born in Currygrane House, near Ballinalee, a couple of miles away from Seán Mac Eoin, but poles apart in terms of Irishness.

In the 1913-1914 period, when Home Rule was the big question, Wilson supported Ulster resistance and facilitated the importation of arms for the Ulster Volunteer Force.

By 1920, he was the highest-ranking office in the British Army and encouraged the Black and Tans in their deadly operations in Ireland. He fought stringently to get the British to reject the Treaty terms and he sought to overturn the outcome, so that British troops could return to Ireland. When that failed, he supported James Craig in his destructive operations against Catholic areas in the newly established six-county state.

After the burning of Ballinalee by the Tans and Auxiliaries in November 1920, Seán Mac Eoin visited Currygrane, where Henry’s brother, James Mackay Wilson lived. Mac Eoin asked him to write to his brother requesting that he use his influence to stop this carry-on. Wilson’s response was that his brother would pay no heed to such a request.

Michael Collins had been planning to eliminate Sir Henry Wilson, but that didn’t happen up to the time of the Truce in July 1921. However, it seems Wilson remained a target for the IRA, even after the Treaty was signed. On June 22, 1922, Wilson was shot dead at his own doorstep in Eaton Square.

Two men, Reginald Dunne and Joseph O’Sullivan, were convicted of the killing and were hanged in Wandsworth Jail on August 10, 1922. Ironically, both men were London-born. Twelve days later, Michael Collins was killed at Béal na mBláth.

The death of Terence MacSwiney, on October 25, 1920, was one of the most dramatic events of the War of Independence. MacSwiney died in Brixton Prison after 73 days on hunger strike. Seán McGrath from Kenagh was a leading Republican in London at that time and he had travelled over to Dublin to take part in the 1916 Rising. When MacSwiney died, McGrath was one of the organisers of the funeral.

Seán McGrath was general secretary of the Irish Self-Determination League in the 1920s, an organisation that had about 20,000 members at peak-time. Right up to the time of his death in 1950, he was involved in the Anti Partition League and United Ireland Association.

Fr Pat Mac Cormaic from Mullinalaghta was serving in Birmingham during the War of Independence and he was present at the inquest into Terence MacSwiney’s death.

Fr Mac Cormaic was later involved in sourcing arms for the IRA in England and a consignment for the North Longford Flying Column arrived sometime after Seán Mac Eoin was arrested. Collins deemed that better use would be made of the equipment in Cork, and it was there they ended up.

A number of Longford men were linked to IRA bombing missions in England, some of which were aborted, while others proceeded. In December 1920, Frank Davis, a leading member of the North Longford Flying Column, was called to Dublin by Cathal Brugha and asked to go with a group of men to London to blow up the houses of parliament. Davis was told that he would be unlikely to come out of this operation alive, but he volunteered to go anyway. However, the operation didn’t go ahead.

In March 1921, it was the same Cathal Brugha who summoned Seán Mac Eoin to Dublin with a similar plan in mind, but this time “The mission was to be the execution of every member of the British Cabinet.” Mac Eoin reluctantly agreed to participate, but he soon discovered that Michael Collins hadn’t approved of the plan at all, and Brugha was acting on his own. Mac Eoin was unfortunate that this trip to Dublin, on an ill-advised visit, would lead to his arrest in Mullingar on the way home. This put an end to Mac Eoin’s War of Independence and he was subsequently sentenced to death for the killing of RIC Inspector McGrath, which had occurred some months earlier.

The IRA decided on a bombing campaign in England in 1939 and one of the principal organisers of this campaign was Willie Mulligan from Aughnacliffe. Willie travelled to and from England, ferrying arms and bomb-making equipment. When De Valera’s government introduced internment in January 1940, Willie was the first man in Ireland to be arrested and he was sent to the Curragh. This was probably on foot of his suspected involvement in the planned campaign in England. Mulligan spent most of the war years in the Curragh.

Ruairí Ó Brádaigh was Longford’s most high-profile connection with the Border Campaign of the 1950s. His first entry into serious IRA activity came in August 1955 when he led a group of eight men to carry out a raid on a British military barracks in Arborfield, about 40 miles from London. While six hundred soldiers were in their beds, a small group of IRA men succeeded in overpowering the nineteen soldiers on sentry duties. Two vans were driven into the barracks and loaded with 55 Sten guns, 10 Bren guns and more than 75,000 rounds of ammunition. Shortly afterwards, the IRA’s haul of equipment was discovered by British police but Ruairí Ó Brádaigh and those who travelled in the van with him escaped back to Ireland. Three others in the second van were arrested and spent long terms in jail.

Jim Curran and the Birmingham Six

Jim Curran from Smear, Aughnacliffe, emigrated to England in 1967, just a year before the Northern Ireland Civil Rights Movement was established. A separate Irish Civil Rights Association was established in Dublin and politicians from different parties, as well as prominent figures like Siobhan McKenna and Edna O’Brien, lent their support. A branch was formed in London in 1973 and, by the end of the year, Jim Curran was its chairman. Thus began almost fifty years of Jim’s association with Irish causes.

For many years, Jim Curran was involved with An Cumann Cabhrach, the organisation which looked after the welfare of Irish prisoners and their families. When the Birmingham Six were arrested, Jim sought the necessary clearance from the republican leadership to provide support to the families, but he was immediately informed that these were not IRA members. Jim Curran was therefore the first person, on the outside, to realise there was a problem with the Birmingham Six, a problem that was to reach massive proportions, when they were subsequently wrongly convicted.

When Jim realised that the six men were innocent, he came home to Longford and approached Longford solicitor, PM Farrell. He had great difficulty in getting Paddy Mel to take any interest in the case, but it did lead to an approach to Seán Mac Bride who advised the families of the prisoners to go to Fr Denis Faul in Dungannon and this was the beginning of a campaign for their release.

A number of other Longford men spent their lives in London in support of Irish unity and freedom. Tom Skelly from Aughavadden, Newtowncashel, was active in Republican circles for many years. In the 1970s, he supported the campaign against internment in the Six Counties and the campaign against the Prevention of Terrorism Act. In 1972, he joined the Irish Civil Rights Association, and he was involved in supporting prisoners and their families and helped out in the campaign for the release of the Birmingham Six. Tom Skelly was a founder member of the Longford Association in London.

Paddy Bond’s background was unusual for an Irish Republican. The Bonds of Faragh, Killoe, were major landlords. His father, Major Brian Willoughby Bond had been in the Connaught Rangers during World War I and Paddy’s grandfather, James Willoughby Bond, was a prominent Unionist and anti-Home Ruler. Paddy Bond went to London and was active in the Connolly Association and ran the association’s bookshop in Gray’s Inn Road in London and contributed to their paper the Irish Democrat.

Pat Reynolds grew up within 100 yards of the Clonfin monument in the townland of Graffoge. He went to London in 1970 and has been involved in many Irish activities since then. He was involved in the IBRG (Irish in Britain Representation Group) and its Chairman and PRO for some years. He was involved in issues like the Prevention of Terrorism Act, strip searching, Irish welfare conferences, transfer of prisoners and many others.

Chris Maguire was another Longford man who was involved with the Connolly Association and other Irish activities.

Patrick Kelly from Legan was involved in one of the last Republican operations in London before the Good Friday Agreement. In the early hours of 23 September 1996, British police raided a guesthouse in Hammersmith and shot dead Diarmuid O’Neill, while standing inside his room door.

Four other men were arrested, including Patrick Kelly. Over a year later, in December 1997, the case of Patrick Kelly and three others was eventually heard at the Old Bailey and Kelly was sentenced to 20 years in prison, the longest sentence ever imposed on a Longford Republican.

Patrick was eventually repatriated to Ireland and later released under the terms of the Good Friday Agreement.