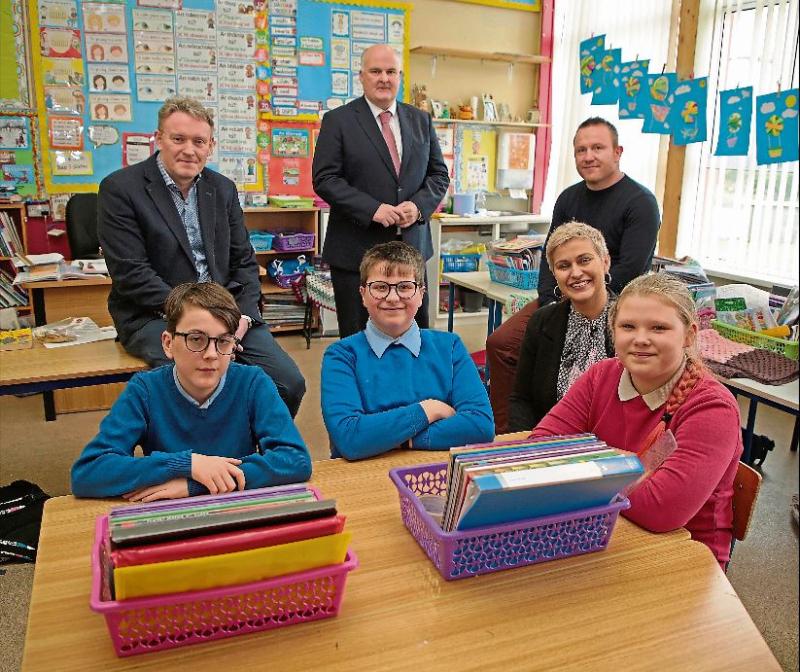 Midlands North West MEP Maria Walsh recently visited Lanesboro Primary School at the invitation of Ms Claire Murphy, Principal, and by Rory Leonard, who is coordinating the process for the Blue Star Programme of Europe.

The school is pursuing the Blue Star Flag, as part of a programme to foster better understanding and knowledge of the European Union and how it affects the lives of primary school children.

As part of this initiative, schools are encouraged to invite politicians who could outline the policies and practices of the European Union.

Ms Walsh was invited to come to Lanesboro and to expand upon the important work that she and her colleagues do as members of the European parliament.

The school also welcomed Deputy Joe Flaherty and Senator Micheál Carrigy. Each visitor provided a unique perspective on the work of the European Union.

One question that was asked was asked by Katrina in 4th class who enquired, ‘What was the first country to join the European Union?’

Ms Walsh said that it was being debated now by the European Commission on whether they should allow Ukraine to ‘speed up its admission to the European Union.’

Ms Walsh was thoroughly impressed with the knowledge displayed by the pupils in 3rd and 4th class and noted that they asked some ‘really insightful questions’.

In 5th and 6th Class, the pupils were each allocated a country to research, and they created some wonderful digital projects on each member state. These projects included information on the capital, the languages spoken in their country and when they joined the European Union. These projects were overseen by Mr Andrew Corr, 5th and 6th class teacher.

There were many questions asked by 5th and 6th class. Some notable questions were: ‘Are there many MEPs in Europe and what does the word MEP stand for?’. Other questions that were asked were ‘How has Brexit affected the EU?, ‘How do you become an MEP?’ and ‘What advantages are there to joining the EU?’.

Ms Walsh was impressed by the broad knowledge base displayed by 5th and 6th class about other member states in the European Union.

Senator Carrigy spoke about the advantages and disadvantages of social media and informed the pupils that legislation and guidelines for social media were being discussed in the Seanad in order to make social media a safer environment for all users.

Deputy Flaherty outlined the importance of being part of a community and that we have a ‘miniature EU in our school’ as ‘Lanesboro school is multicultural, and everybody is treated fairly’. Deputy Flaherty also remarked that now more than ever ‘we need to be kind to each other and to look after each other and that this is how Ireland is treated by the European Union.’

Ms Walsh thoroughly enjoyed her visit and Lanesboro l is another step closer to the prestigious Blue Star award. The pupils were also awarded no homework for Monday which was a bonus to the wonderful visit from Maria Walsh and the other politicians.