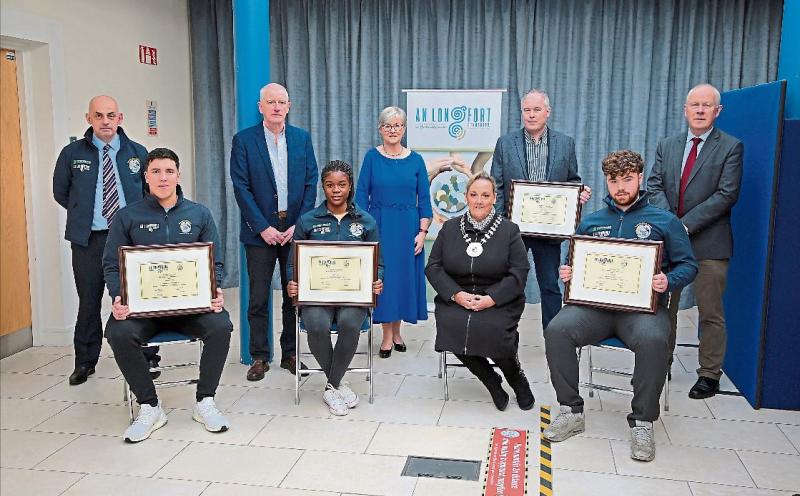 Longford County Council allocated €5,000 towards this bursary. The purpose of the award is to facilitate achievement by aspiring individual performers who have the ability and potential to bring recognition and success at national and international level.

Presenting the bursary awards, Cathaoirleach of Longford County Council, Cllr Peggy Nolan expressed her pride in each of the recipients and paid tribute to their achievements. “We thank you for all that you have each achieved in the past and for lifting our spirits as you did so. We look forward to continuing to support you in future as you fly the flag for Longford.”

Chief Executive Paddy Mahon congratulated each of the recipients and paid tribute to the work of Longford Sports Partnership.
Mr Mahon commented: “Longford Sports Partnership is there not just to support, but also to highlight the achievements of Longford’s local sportspeople and Longford County Council is delighted to be in a position to continue to award these bursaries.”

FUNMI TALABI hails from Edgeworthstown. Her sport is athletics and she is a sprinter. A member of Longford Athletics Club, she currently holds three Connacht 60m age records. She has won National Community Games, All Ireland Schools and All Ireland Club 100m Championships.

Next up is CHARLIE BYRNE from Ballymahon. His sport is rugby. He is a member of Buccaneers Rugby Club and over the past few years, has been selected for Connacht U16, U17 and U18 squads. He has also represented Ireland at the U18 IRFU International test level.

CAOLÁN LYNCH is from Abbeylara. He plays basketball and is a member of Longford Phoenix Basketball Club. He has played with the Irish U16 and U18 International basketball squads.

He is a Schools All-Ireland League basketball finalist performing as team captain and top scorer.

CIARAN MADDEN is a triathlete from Newtownforbes. He is a member of Longford Triathlon Club. He has earned numerous top three finishes at BMW National Series Triathlon events over the last few years.

Last but by no means least is Darragh Greene from Newtownforbes. He is a swimmer who competed at the Olympics in Tokyo last summer. He has multiple Irish champion titles and is an Irish record holder. He is the first Irish man to break 60 secs in the 100m breaststroke.