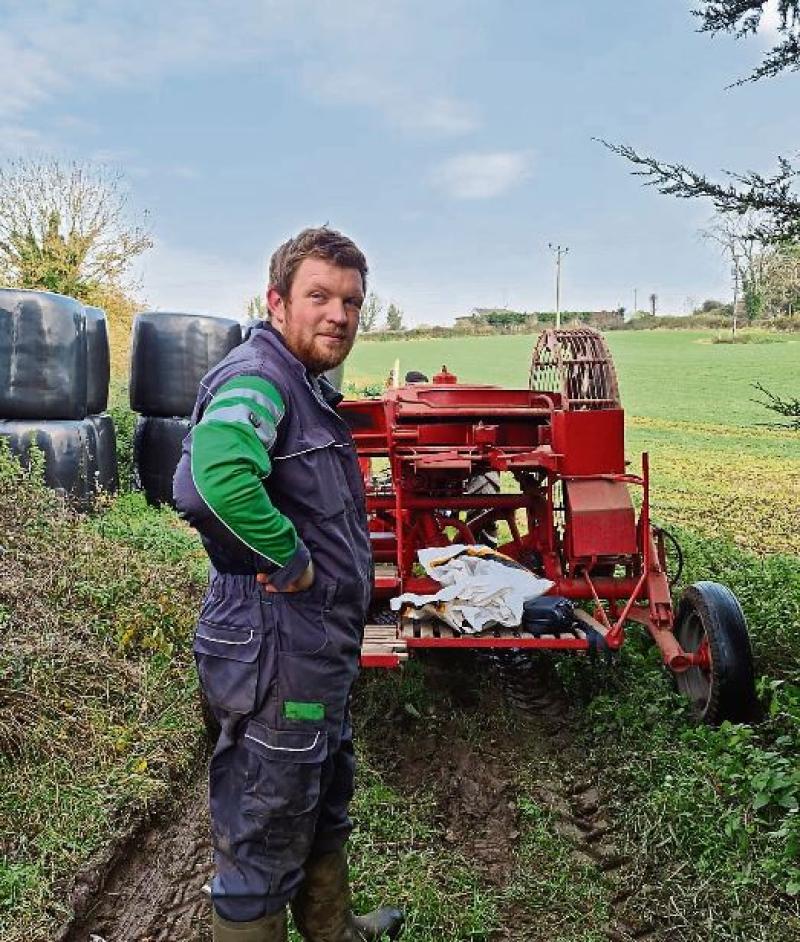 Philip Stewart, better known as ‘Farmer Phil’, is a beef and tillage farmer based in Ballinamore, Co Longford.

The family farm is near the Royal Canal in the picturesque village of Killashee or Cill na Sidhe meaning ‘The Church of the Fairy Mound’ or ‘The Wood of the Fairies’.

Philip is a member of Macra na Feirme and the IFA. Farming approximately 240ac of tillage and 300ac of grassland, (50/50 owned/rented) the family farm is a partnership between Philip, his father Derek and his Uncle Ian. The family also has a large farm contracting business and operates a wide range of machinery. As Philip says “we do everything except hedge cutting.”

His brother Eric, his sister Jessica and his fiancé Olivia Hartshorn also help out. His mother Diane does “all the book work, accounts and all the behind the scenes work.” During the busy season the family also employs some extra workers to help with silage and harvest.

Philip studied in Gurteen Agricultural College and qualified with a Green Cert in 2016. He is very active on social media, mainly YouTube, where he uploads videos every Tuesday, Thursday and Sunday that feature everything from contracting and cattle, to machinery demos and vintage tractors.

According to Philip his “videos are seen in 120 countries, 50% of views are from Ireland, 33% from Britain and the rest from around the world.”

Up until 2004, they were milking a pedigree Jersey herd but were wiped out by TB. They also had a pedigree Limousin herd until 2016, when they switched from the suckler enterprise to a dairy beef finishing system.

Around 400 dairy x beef calves (aged from 10 days upwards) are purchased every spring from local dairy farms. Calves are fed milk replacer using automatic calf feeders and weaned onto a calf ration supplied by Liffey Mills. Philip is a big advocate for Jersey X calves and finds that Jan/Feb born calves are generally healthier and give the best performance.

The Stewart Family used to buy bagged feed which is more expensive than bulk feed and aside from biosecurity risks they also had significant feed losses from vermin. So they purchased a 16t green split V-Mac feed silo from McAree Engineering which could store two different calf rations and which also protected the valuable calf feed from hungry vermin.

According to Teagasc, rodents if not controlled can cause serious economic losses on farms through consumption, contamination and spoilage of food and feed, spread of pathogens which are damaging to human and animal health, damage to buildings and equipment and loss of quality assurance accreditation e.g. Bord Bia.

The new feed silo has two bagging chutes and the Stewarts can move feed using a McAree barrow to the calves. One side can also be retro fitted with an auger if required, to load their Keenan diet feeder.

According to Phil, “We chose a McAree bin as we felt it was the best manufactured feed silo on the market. Great value for money due to their being trouble free and a guaranteed long life.” Noel Kiely, from McAree Engineering was very helpful and gave us good advice on preparing the base for the silo.

Cattle are bedded through the winter either on home grown straw, milled peat or on slats in the former dairy sheds. Finished cattle are sold mainly to Dawn Meats in Slane at a target liveweight of 500kgs minimum. Bulls are finished before 24 months, bullocks at around 25 months and heifers at 26 months. The cattle are all fed on a grass based system with a 100% home grown finisher ration except for biscuit meal, a food waste product supplemented by a mineral vitamin mixture.

The family grows 240 acres of cereals plus field beans (which replaces imported soya beans for protein) and forage maize (under cover) to feed their own stock. They also sell surplus oats and winter barley to an Agri merchant, local equine and livestock farmers. Philip says “we also sell some baled silage, square bales of hay and straw to local farmers. Square bales are popular -because of their higher density and shape they take up less storage space (scarce on many farms) than round bales.”

As mentioned earlier the family operate a wide range of machinery for their farm contracting business. This includes a fleet of Massey Ferguson (MF) tractors, a MF big square baler and a MF combine harvester. They also have a Claas Jaguar silage harvester, a Fusion baler wrapper, JCB loader and many other machines.

Bertie (an Irish x Lakeland terrier), one of their dogs, particularly likes to travel around the farm in a tractor cab and can often be seen in Philip’s YouTube videos. The Stewart family also have a large collection of vintage tractors and machinery from Fergusons to Nuffields, including the first ever tractor the family owned bought by his great grandfather a petrol Ferguson 20 , also included in their collection are 4 vintage MF combine harvesters.

Philip and his fiancé Olivia have also opened a Farm Shop this year, Stewart Family Farm, selling their own home produced beef, which is slaughtered and processed by a local butcher in an approved abattoir. Alongside this they also sell a range of produce from county Longford, including honey and elderflower cordial, as well as ‘Farmer Phil’ merchandise.

According to Philip, “our Friesian and Jersey x beef is selling well. We have great feedback from customers and people are coming back for more.” Their beef, merchandise and other produce can be ordered online, by phone or by visiting their store. Philip says, “The shop is going great, we have a great range of customers from locals to sending boxes of beef to the four corners of Ireland”.

A more recent farm enterprise in conjunction with the Farm Shop was a crop of homegrown pumpkins. Open for the week before Halloween, visitors were able to ‘pick your own pumpkin’. Another great example of farm diversification and an enterprising young farmer.