Drumlish honours those who fought against oppression 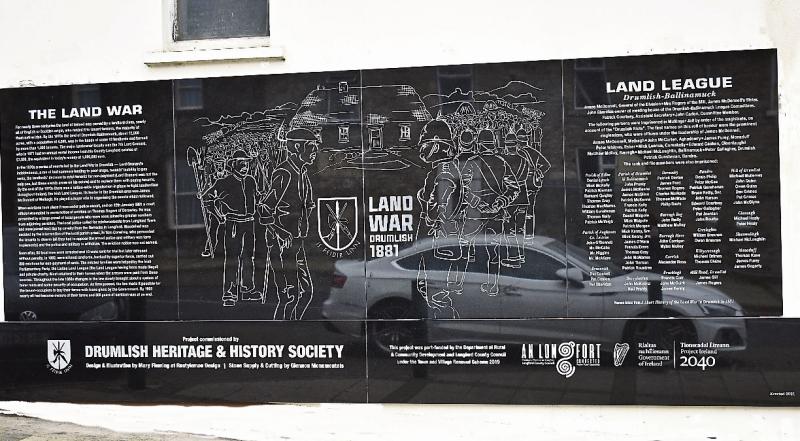 Men and women from Drumlish who fought against oppression during the infamous Land Wars have been honoured with a new monument.

Chairperson of the Drumlish Heritage and History Society, Annette Kane, explained, “There was a lot of stress between landlords who were granted the lands and the people who originally owned them, the tenants.”

These tensions bubbled for decades before coming to a boiling point when people got word of an eviction notice being served to a local resident.

Conditions had been difficult for years, with hard-worked and poor quality land making it difficult to pay rents, and the people had decided enough was enough.

The newly formed Land League and thousands of other fed-up tenants prevented the eviction from taking place by staging a 3-day resistance.

According to Annette, it put Drumlish “on the map”.

She said, “It was pivotal and a turning point for landlordism in Ireland. People just got together and the word went out, and thousands arrived from every parish way outside of Drumlish like Colmcille, Cloone, Mohill, Fearglass, all different districts on the border of this parish.”

She said, “Tenants couldn't give what they hadn't got, the land wasn't giving it. There was pressure all around.”
Eighty five people were arrested for the demonstration, with ten sent to court.

Over approximately the next decade, issues were sorted out and tenants were eventually able to buy back their land for a fee.
Annette believes it's important to honour people who fought against oppression. She said, “They were determined, they stood. This is the period of grit and determination.”

She hopes to celebrate the “enormous” monument - crafted by Glennon Monumentals - properly once Covid has passed.
She said, “We just made it to 140 years, everything will be pristine when we're having a gathering next spring to really celebrate it. It was my Covid project, in a way.

It was good because my time was less distracted, a small team was involved from procurement to design to getting it on the wall, and every one of the parts of the project took their time. You don't get there in a day and a night.”

Annette expressed her pride in the completed project, stating, “It's a very good, proud moment. People feel it's emotional.
There's an awful lot of pride now in the last week, I'm getting feedback myself from people. I think we have suffered a little from our heritage being kind of invisible, but I don't think anyone from Drumlish can say that now.”