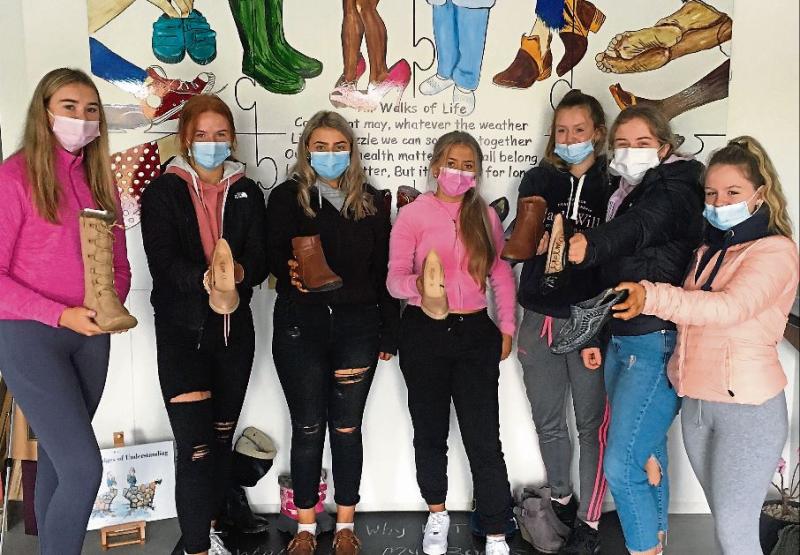 There were a variety of installations on show including one large mural from the students of Árdscoil Phádraig.

The expo was put together to create awareness and provoke discussion on the underlying causes of poverty in all its guises.

Lus na Greine has been involved in highlighting important issues that contribute to local and global poverty over the last five years with the support of national organizer ‘All Together in Dignity’ and supported with funding by the Department of Social Protection.

William O’Connor from Granard Men’s Shed said that the Shed members were delighted to link with their FRC to put a spotlight on homelessness.

He said “it’s a real issue for young families in this area and it contributes in no small way to a poorer quality of life for children and their hard-pressed parents.”

Freda Leahy, Family Support Worker at the FRC said that Youth Mental Health was a big concern in the area particularly after the pandemic and the isolation it has caused for so many.

Sadie Sheridan speaking on behalf of the Art club said that the local environment was a real concern for the group’s members.

Their focus in the exhibition was to highlight the need for everyone to work towards sustainability and encouraging people to curb the race to the consumerism which is damaging the planet.

The students from Árdscoil Phádraig under the guidance of their Art teacher Ms Cooney had entered a colourful installation showing a variety of shoes and boots within a jigsaw format which highlighted the uniqueness of each person despite their economic, cultural, or financial circumstances.

Bernadette Fagan, Community Development Worker at the FRC, helped to organize the exhibition said it was very well received and evoked a lot of discussion on the different faces and causes of poverty.

She said that, while Granard has warmly welcomed many new communities, including refugee families, there was still a lot of barriers to break down particularly language and cultural issues.

She also wanted to highlight the rise in money lending which she said caused many families to exist within a dynamic of perpetual debt.

While the exhibition will close this week, the FRC and the exhibitors are adamant that the issues of poverty will remain live as they continue to work with the community to address the many issues the exhibition brought to the fore.