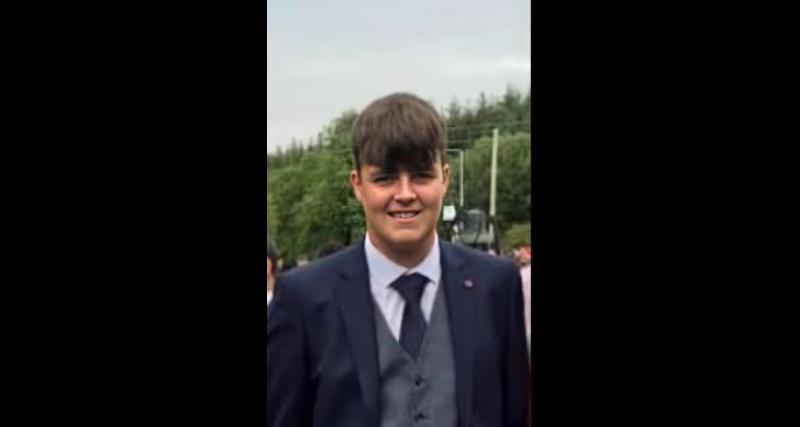 The former Moyne Community School student passed away peacefully at his home in Ballyduffy, Moyne on Saturday surrounded by his heartbroken parents Josephine and Matthew, brothers Niall and Odhrán and sister Tara.

A keen and passionate admirer of the idyllic countryside in which he was reared, Cian was a student at Mountbellew Agri College and readily viewed as being among the area's next generation of aspiring young farmers.

Like many of his peers, Cian played underage football for his native club and had been regarded as an up and coming rugby player of distinct repute, having plied a promising trade with Longford RFC at youth level.

Those capabilities were dealt a cruel blow in December 2018 when Cian was diagnosed with Ewing's Sarcoma, a rare type of cancer that occurs in bones or in soft tissue.

Despite the unpalatable nature of the illness and aggressive treatment that followed, Cian's tenacity and sheer will to live shone through, an attribute which those closest to the popular teen are this afternoon paying testament to.

"The past two and a half years there has been quite a few ups and downs and times where we felt he was getting better. It's just devastating."

Out of respect for the Gray Family all club activity was suspended from Saturday evening to Wednesday and with the club's flag being flown at half mast.

Mr Duffy, a former county councillor, cut an emotional figure as he reflected on Cian's past underage footballing exploits for Dromard alongside an inviting all-round persona that made him one of the parish's most likeable of characters.

"I remember back in 2014 when we robbed Colmcille in a schoolboy championship final where Cian got one of the goals for us," recalled Mr Duffy.

"He was such an inspiration to all of the young people from the area. Cian was just so friendly and outgoing. He was in no way brash or bad mannered or old fashioned, he was just a nice, friendly gassún.

"It's a trait you don't see too often in young lads, maybe because they are often embarrassed but if Cian knew your name you would always get that: 'Hello, how are you?' from him."

Mr Duffy singled out many of Cian's close and wide circle of friends who, he said, are rallying around the much loved teenager's family at this testing time.

As for what enduring legacy the name Cian Gray will invariably leave on a community that is still coming to terms with the weekend's tragic news, Mr Duffy stated simply: "To battle to the very end and never give up.

"Cian didn't give up, he just lost the battle in the end."

Cian’s funeral cortège will leave his residence on Wednesday at 11.30am to arrive at St. Mary’s Church, Moyne, for Mass of the Resurrection at 12 noon, interment afterwards in Legga Cemetery.

Following government guidelines and to protect everyone dear to Cian and his family, the Mass will be restricted to 50 people only. The Mass will be streamed live please go to www.churchtv.ie and click on Moyne.