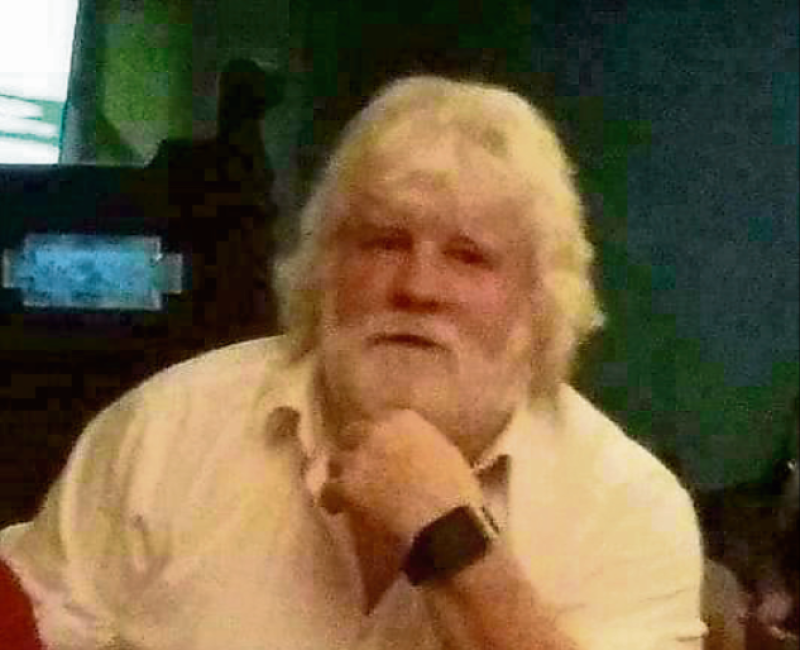 At the Regional Hospital in Mullingar, on Saturday, March 27, after a short illness Richie Hanafee died, and Longford Town lost one of it’s most popular and colourful characters, and a skilled and talented tradesman.

A native of Lamagh, Newtownforbes, son of James and Alice Hanafee, Richie attended the local National School in the village. For most of his working life, his father was a much regarded woodworker at Fees Sawmills, then located in Longford’s Church Street.

At National School, young Richie was very much ‘the leader of the pack’, known for his pranks and devilment, especially around Halloween, as some 'school pals' fondly remembered, as they looked back with great regard and respect for their former classmate.

Richie married Mary Dempsey from Edgeworthstown and moved to live in Longford, where they eventually set up the family home at St Bridget’s Terrace. A carpenter by trade, there were no limits to his abilities in every aspect of building and maintenance work.

His cherished and distinctive white van was fitted with a shelving and storage system, which would leave many modern hardware stores and builder’s suppliers in the shade. A place for everything and everything in its place, was his way of life.

He threw nothing away, and whether it was an outdated fuse, a specialist door hinge or the most modern tool attachment, they were in Richie’s van or on a shelf in his shed, at the back of the house.
He loved going to car boot sales, and prior to lockdown, a Sunday morning trip to a location on the outskirts of Dublin, would have been his normal Sunday morning experience, and he enjoyed every minute of it. The banter, the haggle and the bargain.

Meeting people, watching cowboy films on TV, and bringing his lovable pet dog ‘Marley’ for a walk, were also high on his list of happier things to do, and sadly, the last visitor to Richie’s sickbed, before he was moved to hospital, was his beloved pet, who would never see his master again.

He loved traditional Irish music, and every summer with caravan in tow, Mary and himself would set off on their annual pilgrimage, starting in Doolin, then on to Ballina, up to Bundoran, back to Sligo and home again to Longford, complete with another Bodhrán, another hat and some more CD’s, to add to his growing collection. He also loved a Fleadh Ceoil and was a regular attendee at them, over the years throughout the country.

He loved his pint, but not a drop of alcohol would pass his lips during lent or the month of November. His Saturday night in town, would start by taking the back way from his house to Joe Lyon’s pub on Lower Main Street, and then on to Murph’s in Ballymahon Street - you could set your watch by his routine.

An avid Manchester United supporter, he was also a loyal sports follower of everything Longford, and a very proud Longford man. His political allegiances varied like the wind, the person who got his vote was the person who could do the most for Longford. He was reliable, trustworthy, and above all, a very kind man, with a wicked but harmless sense of humour.

He seldom spoke badly of someone without a glint in his eye, and had a large number of very good customers and clients, always making sure he looked after them. He built up his business by being reliable and good at what he did. It is so cruel, when a man works hard all his life, looking forward to the days of retirement, and life itself comes to an untimely and sudden end for him.

Richie leaves behind his wife Mary, son Richie and daughter Sharon, brothers Jimmy and Brendan, sisters Phillis, Kathleen and Dolly, and of course his grandchildren who he loved so much, to whom we offer our deepest sympathy and share their great loss at this time.

Under the current Covid regulations, as his funeral cortege left Davy Connell’s Funeral home on Monday morning of last week, March 29, on its way to St Mel’s Cathedral, neighbours, customers, and a large circle of very good friends, stood on the streets of his beloved Longford, to pay their tribute and respect to a man with a life well lived. He was buried following the funeral mass, in the family grave at Newtownforbes Cemetery.

Richie Hanafee had a lot of living yet to do, and left us far too early. We will all miss him so much. Yes, he was a legend in his own time, and that’s a tribute not lightly bestowed on many people in Longford, but he well deserves it.