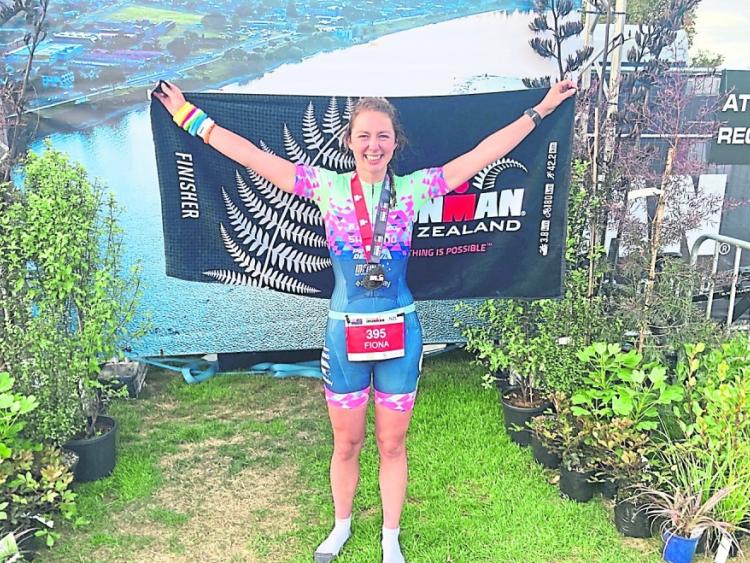 Left: Abbeylara’s Fiona Gallagher, daughter of Martin and the late Mary Gallagher, pictured after she finished first in her age group and was the 4th amateur female overall at the Ironman New Zealand

Abbeylara’s Fiona Gallagher, the 2020 Asia Pacific female AquaBike amateur champion, was in sparkling form once again recently when she finished first in her age group and was the 4th amateur female overall at the Ironman New Zealand.

It was Fiona’s first full Ironman race and it was initially planned to take place in Taupo on Saturday, March 6, however, it was postponed by three weeks because of a community Covid-19 case.

Fiona outlined that she found the postponement ‘pretty hard mentally and physically’ as her training was geared towards the original date.

“We were so lucky to have the second date though,” she reflected. The race was in Taupo in the North island.

Being her first full Ironman race, Fiona had a rough idea in mind of what time she could manage for each discipline individually but wasn't naive to the fact that it's completely different when you do them consecutively.

She continued, “I think there was about 600 in the field altogether this year, so it was a bit smaller than normal, but that's to be expected with no Aussies allowed over.

“I raced from the front all day. I was the 2nd amateur female out of the water.

“The bike was 2 x 90km laps that started and ended in Taupo town. My coach was in town so he told me the gap I had to the next girl in my age group after the first lap, which had stretched out to 15 minutes.

“It was good having that feedback and I just wanted to keep digging away at the gap on the 2nd lap. I had a race plan and a power target to stick to, so I just stuck to that and tried not to get over excited.”

Fiona was 3rd overall getting off my bike.

The run was four laps and she admitted, “The run made me most nervous. I've never ran a marathon before, so I was both excited but a bit scared of what was going to happen. I got round the first two laps and by this stage I had a 30 minute lead to 2nd.

“The 3rd lap was probably the hardest as I was pretty sore by then, but my coach told me to grab some coca cola at the next aid station and that perked me up a bit.”

Fiona, who is daughter of Martin and the late Mary Gallagher, explained that the last half of the last lap was pretty emotional.

Fiona’s impressive performance saw her gain qualification for another World Championship due to be held in Kona, Hawaii in October this year.

But she won’t be participating. Fiona takes up the story, “This race is the pinnacle of triathlon racing, but I've turned that slot down though because of too many travel risks and unknowns.”

Last September, Fiona was scheduled to represent New Zealand at the world ITU Aquabike Championships, however, the Covid-19 pandemic put paid to that.