Against the Covid tide Ballymahon Friends of Crumlin raise €2,000 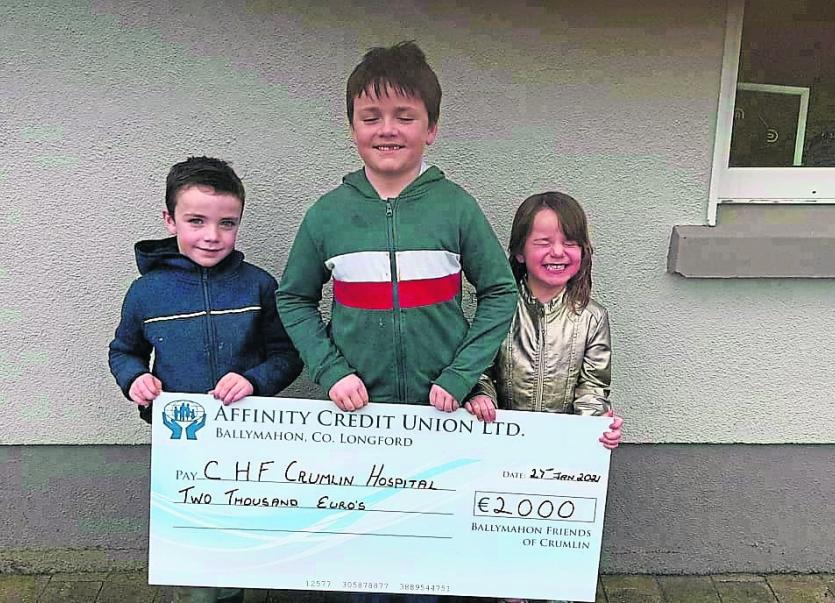 Senan, Cian and Grace Kelly with the €2,000 cheque that was presented to Our Lady's Children's Hospital, Crumlin by the Ballymahon Friends of Crumlin group. Grace is a patient of Crumlin hospital and

The Covid-19 pandemic has had a huge impact on the ability of charities nationwide to raise much needed funds and Ballymahon Friends of Crumlin were no different.

The group’s annual 5k and monster raffle which has consistently raised in excess of €10,000 annually was cancelled during 2020 in accordance with public health guidelines.

However, the group held a weekly lotto bonus number draw when possible which raised some funds.

In December, a friend of the group cut her almost 10 inch plait off and also raised funds for the group.

Consequently, Ballymahon Friends of Crumlin were able to send off a cheque for €2,000 to Crumlin last week.

Chairperson of the group Paul Kelly said, “We’re delighted to have been able to send off this amount despite it being considerably less than in previous years but I suppose every little really does help.”

2021 fundraising is due to take place on Saturday, June 12 and, as the Chairperson said, “It will depend on the public health guidelines in place at that time, the safety of everyone being the primary concern.”

Ballymahon Friends of Crumlin’s Facebook page will keep everyone up to date on what’s happening and Paul has said if the 5k and raffle can’t go ahead, the group may have some other plans in place so keep an eye on the Facebook page for all updates.