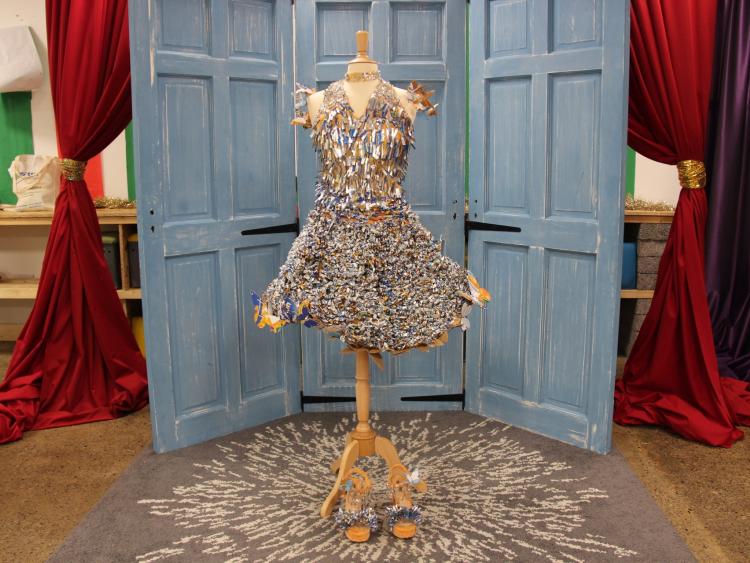 The Most Innovative category winner at the Relove Fashion competition was this entry designed by Lily Hemus Cnoc Mhuire, Granard

The winners of the award-winning Relove Fashion Competition were announced at a virtual event at the Rediscovery Centre on Thursday, February 25.

The virtual event showcased all eighteen finalists and the overall winner was announced by broadcaster Lorraine Keane.

The Relove Fashion competition was open to secondary schools in the Eastern Midlands Waste Region and it encouraged students to take a deeper look at how their clothing is made.

Ten local authorities came together, with the Rediscovery Centre, to create the Relove Fashion competition to help students explore creative reuse options such as upcycling, repairs, alterations, and mending.

Students were challenged to design a unique piece of sustainable fashion and to enter to win the top prize of a €1,000 fashion design pack from the Rediscovery Centre.

The virtual final was hosted at the Rediscovery Centre and all eighteen finalist designs were revealed and broadcast around Ireland.

Lorraine Keane broadcaster and founder of Fashion Relief "I have always had a genuine love for fashion but I am also conscious of the significant natural resources and materials that are used to make clothing and how quickly some of it is disposed of. I am a huge advocate for sustainable fashion and it is inspiring to see that these students were able to make such amazing designs from materials that would have otherwise been sent to landfill. These emerging designers have proven that clothing you no longer want can be remade, reused, and upcycled into wearable and versatile fashion items.”

Joanne Rourke Eastern-Midlands Regional Waste Management Plan Office "I am delighted to be involved with the judging of the Relove Fashion Competition for a second year in a row. In the fashion design process, the reuse of materials isn't always considered when designing clothing. We already have vast amounts of clothing in the world that could be successfully reused or remade into new clothing. It is important that sustainable and circular design principles are used in the production of textiles. The Relove Fashion competition has given me hope that the next generation of designers will bring sustainable fashion into the mainstream."