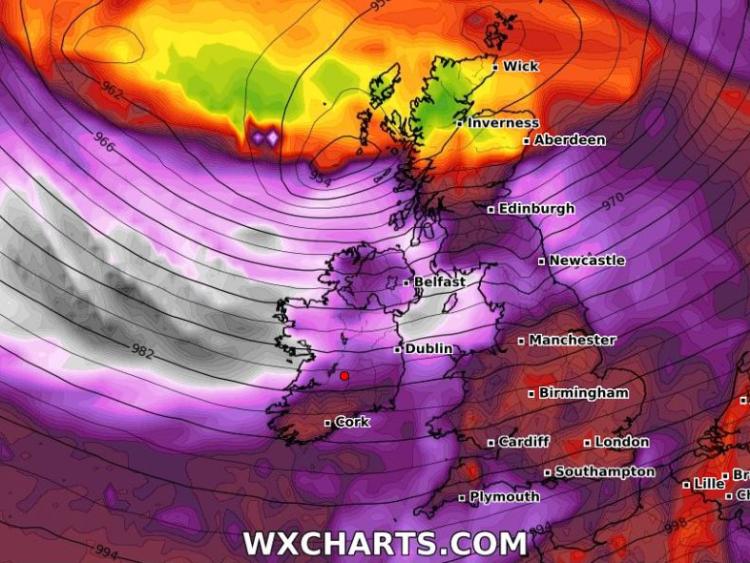 A forecaster has warned that Red Weather Warnings are possible as powerful Storm Jorge, which could be the strongest storm of the season pushes towards Ireland.

In an update on the approaching storm this  morning, Cathal Nolan from Ireland's Weather Channel stated that Storm Jorge is currently undergoing rapid cyclogenisis off the west coast of Ireland and will deepen from a current pressure reading of 990 hPa to 949 hPa within the next 24 hours.

He added that violent Storm Force winds are expected to develop along western coastal districts, with Storm Force winds likely further inland with significant impacts. Weather warnings are likely to be updated throughout the day.

Also read: Another weekend, another storm! Weather warnings on Saturday for Longford and Ireland

He added, "the strongest winds associated with Storm Jorge will affect Atlantic coastal districts of the west, where winds are likely to exceed 140 km/h for a time, with sustained 10 minute winds reaching over 100 km/h along exposed coastal areas. This comfortably surpasses the requirements to be classified as a Status Red Weather Warning in Atlantic coastal districts which is why IWC has indicated a Status Red warning in those locations."

The Offaly forecaster stated that elsewhere wind are expected to gust to between 110 - 130 km/h, with significant impacts also likely in these areas. IWC has indicated that a more widespread Status Orange Weather Warning is required due to the strength of the wind and the likelihood of fallen trees due to the saturated soils and weakened nature of some trees from previous storms over the past number of weeks.

He also stated that outbreaks of heavy rain will become widespread during tomorrow morning also, turning to snow for a time in many inland areas leading to temporary accumulations before turning back to rain briefly. Significant snow accumulations are likely on higher ground above 250 - 300 metres with some elevated routes likely to be affected on account of blowing snow and near blizzard conditions.

For more from Ireland's Weather Channel, click on the link below.